In the past, I talked about board games based on franchises, both the good and the bad. Generally, you have to cash in on a franchise while it’s popular or one that’s enduring, although nostalgia has its place.

You wouldn’t think anyone would design a decent board game out of a 1970’s Horror film. Between the age and concept, coming up with a game that’s both enjoyable and reflects the material would be a daunting task.

Somehow, Prospero Hall and Ravensburger, the people behind Villainous, managed to do it. I opened up the Jaws board game with low standards and came out having a blast (no pun intended).

Most readers should know the basic concept of Jaws from the 1975 film.

A Great White shark terrorizes a small New England town, causing chaos during their busy tourist season. The Chief of Police, an oceanographer, and a grizzled fisherman are the only ones who take the threat seriously and try to put a stop to it.

Jaws is an asymmetrical game of “hide and seek,” where one person plays the shark while one to three other players take on the roles of the main characters. The trio of protagonists must find the shark and spear it with flotation barrels, then face-off against the menace as it attacks their boat.

This board game is divided into two acts, which can be played as separate mini-games in their own right: Amity Island and the Orca.

During the First Act, the Shark moves around the board secretly, trying to eat as many Swimmers as it can. The Crew (made up of the three main characters) must prevent Swimmers from being eaten while figuring out where the Shark is and spearing it.

Amity Island is broken down into three phases: Event, Shark, and Crew. The Event Phase sets up the round, placing Swimmers at four different Beaches and adding special rules.

The Shark Phase grants that player three actions that they can use to Move and Eat. The player uses a special pad to write down their movement and activities, so the others remain unaware of their location.

The Shark also receives four special abilities that it can use once, such as moving faster or avoiding detection. These Power Tokens are hidden as well, with the other players only aware that an ability has been used but not which.

The leading (and sometimes only) indicator on the board of the Shark’s actions is when Swimmers disappear. Only if the Shark passes a Motion Sensor (something the other characters must place) does the player say anything about their choices. During the Crew Phase, each character receives four actions of their own, with many choices. The three Crew (Brody, Hooper, and Quint) are all different; while they can be activated in any order, each must finish before another may begin.

All characters may spend actions to Rescue a Swimmer (if they’re at a Beach) and Move (whether in their boat or around Amity Island). Each character can also Pick Up Barrels, but what they do with them is different.

Brody spends most of the time on Amity Island, running Barrels from the Shop to the Docks (for others) and trying to control the Beaches. He can search for the Shark with Binoculars as well as Close a Beach, limiting where Swimmers spawn.

Hooper has a fast boast, allowing him to Move quickly; this will enable him to reach Swimmers fast, pick up dropped Barrels, and hand them off to Quint. He also has a Fish Finder, that allows him to determine if the Shark is in his spot, adjacent, or somewhere else.

Quint is the primary offense of the Crew, as he can Launch a Barrel into his (or an adjacent) spot. If the Shark is present, the player announces its presence and puts the Barrel on its player mat; if not, the Barrel remains there as a Motion Sensor until picked up again.

The First Act ends when either the Crew has attached two Barrels to the Shark or a total of nine Swimmers have been eaten. The faster the protagonists move, the more prepared they are (and the less powerful the Shark is) during the second part of the game.

Most of Amity Island is a game of Battleship, where the other players must predict the Shark’s location through deduction and launch attacks into the spot. They can use disappearances of Swimmers, Binoculars, the Fish Finder, etc. to determine movement and position, in the hopes of hitting the Shark with a Barrel.

Should they find the Shark early, then they’ll be able to gear up when it takes them as a threat and attacks their boat. Wait too long, however, and the Crew will be under-geared and the Shark ready to take them by surprise with powerful abilities.

The Second Act takes place during the iconic finale, where the main characters must battle the Shark as it tears apart their ship and tries to eat them. The Crew must predict where the Shark will surface and use weapons (and tools) to kill it.

The Orca has a total of six steps, starting with the Resurface Options. Three cards are drawn at random, showing where the Shark might attack; the ship takes up eight tiles, with a boat and water section on each.

The Shark Chooses one of the three possible tiles to attack. Some Resurface Cards make it easier to damage the boat, make the Shark harder to hit or allow them to shake off attached gear.

The Crew Prepares for the Shark by Moving, using an Accessory, choosing a Weapon, and where they will Target; the faster they were during the First Act, the more Gear Cards they’ll have. Picking where to be and what to use is essential, as it damages the Shark while avoiding being hurt.

During the Shark Reveal step, the Shark shows where they are and what Ability they’re using; the slower the Crew were during the First Act, the more Ability Cards the Shark will have. If the location had special rules, the Shark could also use them.

The Crew Attacks next, as long as they were in the right spot (or targeted it), using the Weapons they chose. Weapons with dice must beat an Evade number to Wound and ranged Weapons only have a single shot/use (without extra Ammo).

The round ends when the Shark Attacks, focusing on the boat or a Crew member. The player rolls dice to damage (or destroy) tiles or wound people; also, attacks on the ship can knock Crew into the water, and the Shark gets a free shot at any nearby swimmers at the end of the round.

The second Act (and the game) ends in three ways: the Shark destroys the entire boat or kills all three Crew (that player wins), or the Crew kills the Shark (the other players win).

What’s impressive about Jaws is how it feels like the movie, even if things go slightly differently. Part of that is the design, which is reminiscent of old ‘70s board games, from the artwork and font to the meeples and tokens; I felt like I was playing one of my parents’ old board games, in all the best ways.

The asymmetrical design also makes the Shark feel powerful and puts the Crew on edge, as they’re the ones that have to plan the most. Although there’s a strategy to playing the Shark, most of the deduction and scheming falls on the other players; Act Two is the most intense, as the Crew is more easily wounded (and killed) and they must coordinate their actions if they hope to win.

Jaws isn’t perfect, however, as it does suffer from two things: theme and replayability.

If you’re not into sharks eating people or ‘70s Horror, you probably want nothing to do with this game. We had several players who said they appreciated the game design, but it wasn’t something they’d want to play again.

Even if you are a fan of the franchise, Jaws does lose some replayability, despite randomness. There’s only so often you can play “guess where I am,” performing the same actions and goals, even with switching up the Shark’s player; this game will probably be brought down on special occasions rather than a regular at the table. 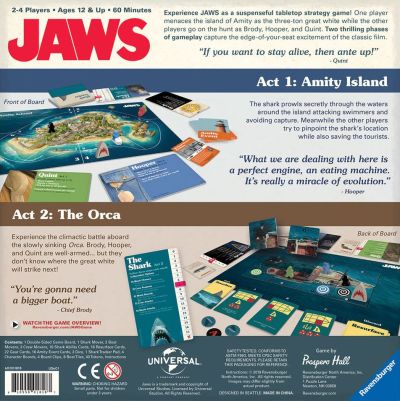 Overall, however, I’m impressed that this game was that much fun while paying homage to the film. I never thought anyone would make a decent gaming experience out of a concept like Jaws.

If you’re a fan of the film, enjoy “hide and seek” and deduction, or it’s just time for some fun during Shark Week, then I recommend picking up this board game.

I give Jaws a suspenseful 4 air tanks out of 5.