Disney certainly seems to be the king right now. Not only do they own their own material, but they’re also in charge of two of the biggest franchises in pop culture. From movies to television shows, toys to comics, you can’t escape the House of Mouse.

You would think, with all the products they’ve put out, that tabletop games would be one of them. Unfortunately, other than games licensed for Marvel or Star Wars and re-skins of classic board games, there’s little Disney-related at the table.

For the first time, you can portray everyone from Maleficent to Captain Hook, as you attempt to achieve your villainous goal before your evil compatriots.

At its core, Villainous is really a series of mini-games that each player must complete before their opponent. While pursuing their own goals, players will also interfere with their opponents’, thus creating a need to balance progress and obstruction.

Players choose one of six different classic Disney villains: Captain Hook, Jafar, Prince John, Maleficent, the Queen of Hearts, and Ursula. Each villain has their own Villain Deck, Fate Deck, and “Realm” Board, in addition to a Villain Guide that explains the specific goal (and any additional rules) for that character.

Play occurs almost entirely in one’s own Realm, including movement, actions, etc. The only time players affect each other is through using the target’s Fate Deck against them, or the occasional Condition card used in response to someone else. 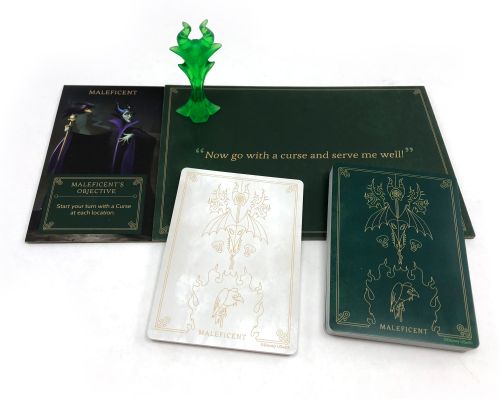 A player moves their Villain to any other location in their Realm, barring additional rules. They then perform any available actions (indicated by icons in that spot), in any order, if they so choose.

Actions are varied and different for each location, and even between boards; they range from gaining Power (a necessary resource) to playing or discarding cards. Each villain’s goal is different as well, so what actions are available (or needed) changes.

Jafar is concerned with finding the Cave of Wonders and acquiring the Lamp, so Actions or Allies that help him do that are important. Prince John prefers to gain Power and may collect it in the form of taxes while using Allies to prevent Heroes from interfering.

Speaking of Heroes, these are placed on the board through Fate, an action a player takes that allows them to use another player’s Fate Deck against them. Players may draw from a special deck of obstacles and place them on a location in that target’s Realm.

Heroes are a pain because of their effects on the board, such as canceling Maleficent’s curses or interfering with the Queen’s croquet match. Also, the board is designed so when Heroes are placed they cover some of the available action icons; until that Hero is defeated, those actions are unavailable at that location.

Heroes may be removed through specific Effect cards, but more often you must play (or move) Allies to the location and then defeat them with a Vanquish Action. When Heroes enter the board, they can wreck everything, and derail turns of planning.

One of the most amusing consequences of playing this game is how cutthroat and savage opponents become. The amount of anger, vengeance, and shit-talking that occurs between players were astounding, and that’s coming from someone who’s played wargames and CCGs.

Villainous is like playing mini-games on your phone, competing with others to get the highest score first, except they occasionally slap your phone out of your hand. The name and theme of the game are perfect because every game we played people began to devolve into the personalities of their characters.

I also enjoyed the quality of the game, from the Disney-licensed artwork to the card-backs to the unique pieces for each villain. Although I think the Cauldron (that holds the Power Tokens) is a bit cheap, as it’s a flimsy piece of plastic, the rest of the components are top notch.

One complaint, however, is that the game only comes with six villains; each villain only ever has one goal, and once you’ve beaten the game with them, there’s little replay with that character. Once a player has won with all six villains, the replayability drops notably, and I could see the game ending up shelved after a while.

Given the game only has six evil characters out of the entirety of Disney’s intellectual property, I hope that they end up doing expansions for new villains. As each player is a mini-game unto themselves, there would be little problem with balance or integration.

Some recommendations among our players included the Evil Queen, Lady Tremaine, Cruella De Vil, Gaston, Scar, and Dr. Facilier. Any expansions would add much more playability, as players try to win (or master) each new character. 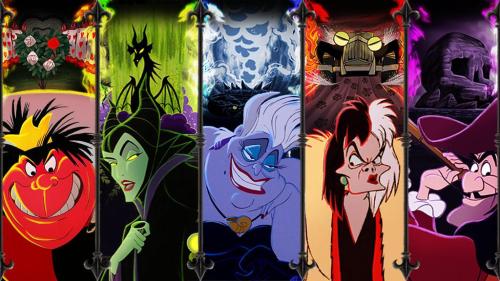 Villainous was a sweet find in an industry that seems lacking Disney-specific board games. Although technically playable by kids, I think this game works best for teens and adults, if anything because of the competitive nature (and theme).

I only hope they put out expansions to give us new villains to pit against one other. The better to bring out the worst in our friends and family and see who’s the most like their chosen character.

I give Villainous a conniving 4 evil plots out of 5.