I’m going to be frank: For all of the warnings I’ve given about franchise-based games sucking, I certainly seem to find some gems. From Jaws to Big Trouble in Little China, it looks like we’ve been getting some pretty good tabletop out of nostalgic pop culture.

Still, I was guilty of a bit of bias toward a game based on the Power Rangers. It reeked of the cheesy ‘90s, with its flashy colors, weird board, and all the names from the original show.

Somehow, Jonathan Ying and Renegade Studios managed to capture the essence of my adolescence and young adulthood in Power Rangers: Heroes of the Grid.

Take control of the heroes of Angel Grove, as they stop Rita Repulsa and her minions. Can you defeat the enemies, build up energy for your Zords, and combine into Megazord before the final boss?

Power Rangers: Heroes of the Grid is a cooperative game of action points, dice rolling, and cards, where each player controls one of the five Power Rangers. Starting from your Command Center in the heart of the map, you move into different areas to defeat the enemies that spawn there.

As Rita’s forces grow, locations become panicked; should all of Angel Grove reach this state, the Rangers fail as the town is overrun. Similarly, should any Ranger fall and be unable to recover, the team is lost, and Rita wins.

Only by keeping Angel Grove safe and calm do the players have a chance to win. Defeat the final boss, and you’ve proven yourself as heroes… until next time! 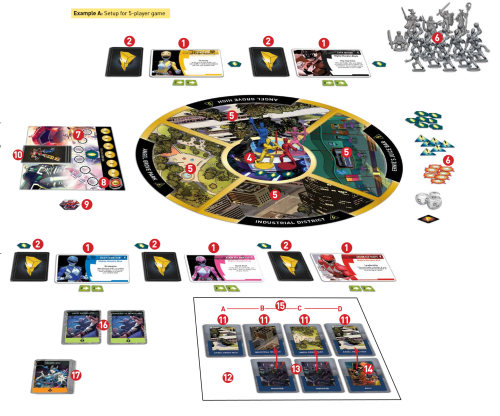 Each round of Heroes of the Grid takes place over two phases: Deployment and Action.

During the Deployment Phase, enemy cards are flipped over from a pre-formed (but shuffled) deck to determine what (or who) shows up in a zone. As the game progresses, the chances of encountering a Monster or Boss increase, making the game more challenging.

Figures of any kind can fill up a zone, until it reaches its limit and becomes Panicked. Alternately, if a Monster or Boss arrives, the area automatically enters that state regardless of enemies.

Panicked zones can spill over into others until all of Angel Grove is overrun unless the players reduce the threat. Defeating enemies, whether foot soldiers, Monsters, or the final Boss, occurs during the Action Phase.

During the Action Phase, players spend each character’s Action Tokens to Move, Recover, or Battle. Players decide which Rangers activate and in which order, and you can even choose to split a character’s activations, so they happen before or after others’.

Moving in Heroes of the Grid is simple and needs no explanation. You spend a token to move to anywhere else on the map, regardless of distance.

Recover is also easy, as you reshuffle some cards back into your Character Deck, and gain an Energy Token (if you don’t have one). You can also recover all of your cards and gain energy by Moving to the Command Center.

The real action happens when you choose to Battle, which initiates combat between all the enemies and Rangers present at that location. It doesn’t matter who starts the Battle, and multiple Rangers can repeatedly choose this option, to fight until the last enemy is gone.

A Battle in Heroes of the Grid becomes a mini-game into itself, that involves everyone present. Players use Character Cards from their hands to try and defeat the ones drawn from the Enemy Deck.

The group receives a shared pool of Energy Tokens and can draw up to their maximum hand size. The enemies create a Combat Sequence by drawing cards and laying them in order (from Left to Right).

Players and enemies then take turns, with a Ranger playing a card or the enemies activating the next step in the Combat Sequence. This back-and-forth continues until the final Combat Sequence ends, after which a Ranger can play one last card.

Rangers defeat cards in the Combat Sequence mainly by playing cards that have an Attack value (as well as special effects). The Attack value shows how many dice are rolled, and players try to roll hits equal to the Enemy Card’s Health value.

Hits can be accumulated over multiple plays by different characters, meaning you work together toward that goal. Also, characters might play cards that do no damage but provide bonuses to other characters (or even help them recover).

Each card has an Energy cost, including those that cost nothing, with higher Energy cards doing more. You can draw that Energy from your personal stock or the shared pool formed at the start of the Battle.

If the characters defeat a card, it is flipped face-down, so that point in the Combat Sequence has no effect. Foot soldiers are removed and added to the Ranger’s Experience Track, whereas Monsters remain until all their cards are defeated.

Enemies “attack” in Heroes of the Grid by activating each card in the sequence, which can do damage or other effects. Players choose which Ranger takes the consequences unless the card says otherwise.

To defend against damage, the Ranger flips cards over from their Character Deck and looks at the Shields. If equal to or less than the number, it’s discarded (and another card might be flipped); otherwise, the card returns to the deck.

A Ranger’s Character Deck acts like a “health pool,” and if it’s ever fully depleted, the Ranger is defeated and sent to the Command Center. The Center only has Energy to recharge fallen rangers a limited amount, so recovering (through Actions or Cards) is essential!

Play continues, with the Rangers defeating spawned enemies, trying to keep Angel Grove from Panicking, until the final Boss appears. Along the way, they’ll be filling up their Experience Track and increasing their Megazord’s Power.

When the Experience Track is full (thanks to defeated foot soldiers), they increase Megazord’s Power track by one and then summon a Zord. This card is drawn from a shuffled deck, and the Zord is given to the Ranger it matches.

Zords provide powerful abilities, similar to the unique ones each Ranger has, although they can only be used once-per-turn. The real fun is when all Zord’s are out, and the Energy Track is maxed, allowing the team to morph into the Megazord.

Any Ranger can use the Megazord card, and its location constantly changes to whoever used it. Save this card’s ability for the most significant battles, because you’ll need it!

What I love about Power Rangers: Heroes of the Grid is that it’s the right mix of difficulty, strategy, and luck.

This is not a forgiving game – if you waste your turns or cards, you can be overwhelmed (and have Rangers defeated) quite fast. Your group needs to think about where to go, what to do, and who takes point on the Battle.

This game has a lot of synergies, both in Ranger abilities and cards, so a good team can find ways to keep your decks full and enemies defeated. The difficulty increases, however, the longer you play, and you may end up facing stronger enemies coming from multiple fronts.

Don’t be afraid to go all in, however, as you must increase that Experience Track, gain Zords, and eventually morph into the Megazord. The final Boss is no joke, and you’ll need every trick you have to defeat them. 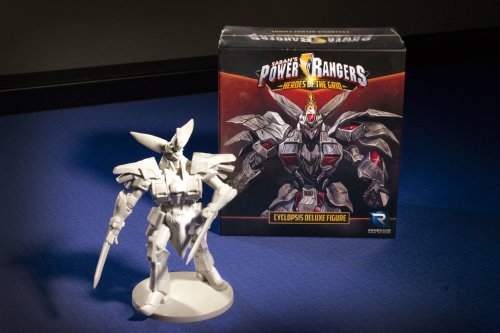 The main downside I had with the game was it both the footprint, cost, and the repetitiveness.

Heroes of the Grid has a lot of components and set-up and can take up a fair amount of space, especially with all five Rangers in play. At $90 for the core game alone, it’s also rather pricey, which may keep more casual (or younger) fans away.

Also, even with shuffled decks, a variety of enemies to choose from, and some rules variations, the game can grow tedious. Luckily, the designers have already put out expansions that add new foot soldiers, Bosses, and even new Characters and Zords. Whether you’re a Power Ranger fan (old or new) or just like some fun action, I was very impressed with Heroes of the Grid. Despite its intimidating component list and complexity, it turned into a fast-paced game with some considerable difficulty that requires you to work as a team.

I only wish it wasn’t quite so expensive because you need to purchase the expansions after a while to get more replayability.

(We’d like to thank Gamers-Corps in Ellicott City for providing us both the game and space to playtest this product!)