Avengers: Infinity War has been out two weekends now, but it’s breaking records. The capstone of a decade worth of MCU films, there’s no doubt this movie will linger in fans’ minds for some time.

Memes pervade the Internet while those who’ve yet to see it try to avoid spoilers. In the meantime, everybody is trying to ride Infinity War’s popularity, from retailers to computer games.

Tabletop gaming is no different, which is why we decided to try out Thanos Rising – Avengers Infinity: War by USAopoly.

Now you can bring Thanos’ quest for the Infinity Ge-, sorry, Stones, into your own home. Join superheroes from across the galaxy as they defend the cosmos, and reality, from the Black Order.

Will your ragtag teams defeat the villains and prevent Thanos from completing the Infinity Gauntlet? Or will too many heroes fall, allowing the Mad Titan to finish everything with a snap of his fingers? 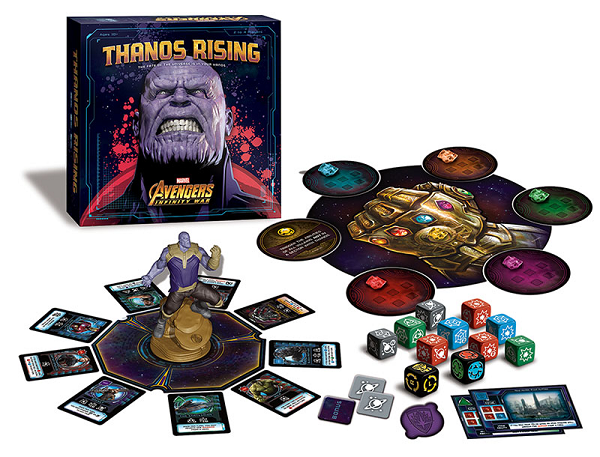 Despite the number of components (the box gleefully declares it has “over 190”), Thanos Rising has relatively simple rules.

The “board” consists of two main areas: The Deployment Zone (three sectors that Heroes and Villains can be found) and the Infinity Gauntlet (including Infinity Stones which Thanos has acquired). Also, players have their Team Base cards and a Team Leader, around which they’ll build up their teams.

Each round an active player decides what Deployment Sector they’ll focus on, deal with the increasing threat of Thanos, and attempt to acquire Heroes or defeat villains in their chosen sector. The game ends when the players have defeated at least seven of Thanos’ crew, whether the weaker Outriders or the various members of the Black Order.

Players have only so much time to beat the Mad Titan’s army, however, so they need to work smart and fast. Thanos will win if the players don’t meet their objective before he knocks out ten of their heroes or one player’s entire team.

Of course, he obviously also wins if he collects all six Infinity Stones…

Much of this game focuses on different colored Power Dice that focus on four “aspects” of the MCU: Battle, Technology, Mystic, and Cosmic. Each type of die has its specific aspect on three faces, with the other types on the remaining faces.

Team Bases and Heroes center on these aspects, which determine your core dice pool as well as affect teams and heroes. For example, the Avengers Compound provides nothing but red “Battle” dice and provides a bonus for Battle results; meanwhile, Doctor Strange is a Mystic Hero who gains a bonus if you have more Mystic characters on his team. 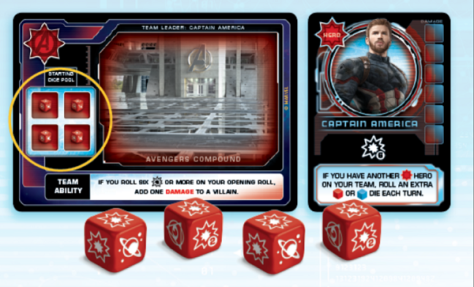 In addition to focus/type, each card has a combination of symbols and numbers that match these aspects. During the Power Dice phase, you’ll need to match dice to the number and type to either recruit a Hero or damage a Villain.

This core mechanic makes the Deployment Phase valuable, as you need to think about your Power Dice, bonuses, and abilities before diving into a sector. Each sector holds three cards (Heroes or Villains) that will change as characters are recruited or defeated, each with their unique requirements.

Are there Heroes you can easily recruit? Is there a Villain on which everyone needs to focus? Maybe you see a Hero who’s about to be defeated, and you want to save them?

Once you’ve chosen the sector you’re focusing on, the Mad Titan rampages across the board. Players take a moment to roll two dice in the Thanos Phase: The Infinity Stone die and the Thanos die.

The Infinity Stone die has a face matching the color of each stone. Thanos marks progression toward acquiring that stone or, if he already has it, activates its ability.

The Thanos die dictates what the Mad Titan does that turn, either moving from sector to sector, working harder on acquiring Infinity Stones, or activating Villain cards. The latter often has effects on everyone, from hurting Heroes of a specific aspect to rolling the Infinity Die again.

Regardless of which action he takes, Thanos will proceed to dish out a heaping of damage to everyone in his current sector. Choosing your sector is important if you want to avoid his wrath, but given how random the die is, you can never be sure where the enemy will look next or what he’ll do.

Once you’ve survived the latest wave of attacks, it’s time for your team to do their thing. During the Power Dice phase, you collect the die pool dictated by your Team Base as well as any bonuses from heroes.

Once you roll your pool, you assign any number of faces to a single matching card (Hero or Villain), hoping to match every symbol eventually. You may then reroll any unassigned dice and try again, repeating this until you run out of dice.

Although possible to match more than one card in your sector, it’s highly unlikely you’ll complete multiple cards when you have a starting or small team. Instead, you’ll find yourself focusing on easy characters to acquire (like Hawkeye), aspect specific characters (like Guardians who’ll complement Gamora), or simple Villains (like Outriders).

If you’ve matched any Hero cards, remove all damage from their card and add them to your team. This recruiting is the primary way you’ll build stronger groups with which to defeat Thanos’ minions.

If you’ve matched any Villain cards, add one damage counter to them and gain a Bonus Token. Remember, your primary goal is to defeat enough Villains before Thanos completes his objectives.

Bonus Tokens are random and provide anything from bonus dice to reducing Thanos’ Infinity Stone progress to healing Heroes. Also, as this is a coop game, you can use your Bonus Tokens for other players or their Heroes at any time.

Once everyone has completed their Power Dice rolls, its time to clean up from the aftermath. Any card (Hero or Villain) with a full health track is removed and considered defeated.

If you reach seven Villain cards, you win; if Thanos and his minions defeat ten Hero cards, however, you all lose. These defeated Heroes may come from your Team or those Heroes currently in Deployment sectors, so you might need to save someone to prevent the enemy from winning. 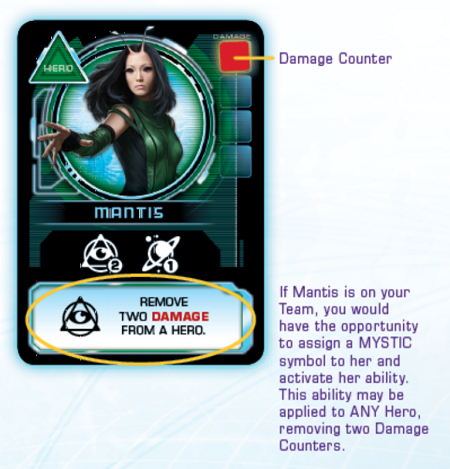 You’ll want to save those Heroes anyway, as they often come with unique abilities that will help you win.

Some of these abilities provide extra dice or allow you to change them. Others offer you more opportunities to assign Power Dice and activate skills, such as healing Heroes or gaining Bonus Tokens.

At the end of your turn, the play passes to the next player, and they start the same process with their team.

From the sessions we’ve played, Thanos Rising is hard, and not just because the game is stacked against you (even though it is). The main issue is the randomness of the game, as RNGesus lingers throughout this Infinity War.

The cards in each sector are random, meaning you might find no easily acquired Heroes or a nasty combination of Villains from the setup phase. Bad luck can really hamper your game, making it hard to do anything and giving Thanos a head start.

Even if there are Heroes or Villains you can focus on, you’re at the mercy of the dice, and bad rolls can screw a player over. You may need an “easy” Power Dice combo given your pool, but you still roll the worst combinations possible (repeatedly) and gain nothing.

Worse, the Infinity Stone and Thanos dice only exacerbate the situation, as they can quickly damage Heroes you’re trying (or failing) to recruit or even your team. Remember, if your Team is knocked out (whether from repeated damage or only having a few members), everybody loses. 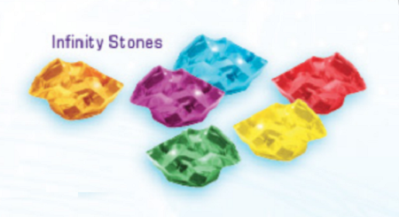 Another issue with Thanos Rising is the questionable design and proof-reading. For a mass-marketed American-style game, the components seem rather uninspired, and the rulebook has problems.

The plastic Infinity Stones aren’t gem-like at all (more like random volcanic glass), which is odd considering the Infinity Gauntlet has gem-like cutouts to hold them. Also, the Thanos Die in ours has a face that doesn’t match the design shown in the rulebook.

Speaking of which, the rulebook has a horrific font and layout that makes it hard to read. This design is in addition to rules that certainly need clarification or FAQs.

Despite these flaws, the remainder of the game is fantastic and deserves the Marvel stamp. Each Hero and Villain uses artwork that accurately portrays MCU characters and the giant Thanos statute for the Deployment Zone is fantastic.

Thanos Rising is primarily an American-style thematic game, with its dependence on randomness and gaudy components. The number of times that lousy luck ruined our chances was astounding compared to Euro-games; despite being a coop game, anyone that hates “Ameritrash” might want to look elsewhere.

Even though we prefer other genres overall, our groups kept demanding another crack at this game. The difficulty level could be astounding, and Thanos Rising became like that puzzle or level you just had to defeat once.

Maybe that’s what the designers had in mind: to make the chance the players would win as unlikely as in the movie.

As for replayability, there are ways to make it harder (or easier), but nothing of any notable difference. These “variants” merely increase (or decrease) the number of Villains to defeat, or adjust any other value (e.g., Heroes defeated, Teams wiped out, etc.).

The most significant difference we experienced was the number of players, which may bring more chances at the table. Although the difficulty doesn’t change (Thanos only gets as many turns as there are Teams), working with one, two, or three other Teams does affect strategy (and the ability to help others).

As fun (and frustrating) as Thanos Rising was to play, this game doesn’t rank high on our shelves.

As MCU fans we love the theme, the difficulty, and the opportunity to “right” the end of the movie, but our enjoyment ends there. The sheer amount of randomness (that could make or break a game from the start) and the lack of long-term replayability, means this box might fade from memory (or reality) by the time Avengers 4 is in theaters.

I give Thanos Rising a heart-wrenching 3.5 final words out of 5.