Stephen King’s IT has become a cultural phenomenon recently. The visage of Pennywise has become as common as Freddy and Jason, even overtaking them (for the moment).

The new films have brought in original readers of the book, those that remember the ‘90s mini-series (which has not aged well), and new audiences curious about what “IT” is. We’ve written about the good (and bad) of both the 2017 movie and its second chapter, so we’re not immune to the pop phenomenon.

There was no question whether I’d pick up a board game based on the recent films. It’s horror, it’s IT, and as soon as I saw the box, I added it to my collection. 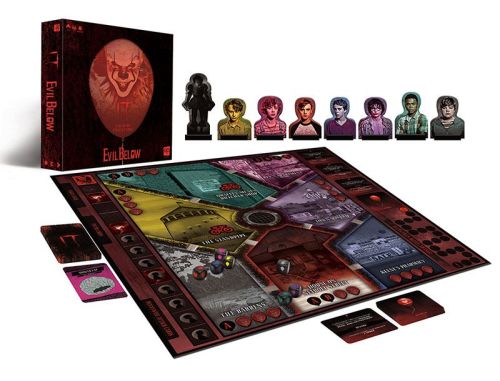 IT: Evil Below is a cooperative ‘push-your-luck’ game of moving, collecting, and confronting the terror of Derry.

Players work together as members of the Losers’ Club, gathering items that will help when they go after the menacing clown. Along the way, they’ll try to save random victims (as well as themselves) and keep “IT” from growing more powerful.

Each player takes on the role of a protagonist from the story, each with a unique ability. You don’t need to play all six characters to enjoy the game, as the more players, the more likely bad things will happen.

The board consists of color-coded locations from the story, which help guide everything from taking Actions, dropping Totems, and even where Pennywise will strike. Each site also has four balloon slots, which empty over time (and increase the monster’s strength there).

Along with the board, there will be tracks for IT’s Evil Influence, the Losers’ Club’s Strength, as well as various decks of cards (Weaknesses, Totems, Pennywise’s Attacks, and a Fight Stack). 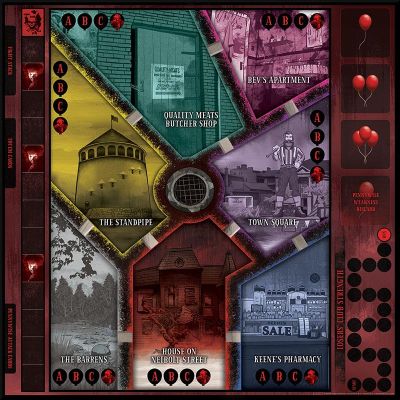 A player turn is divided into four phases: Roll Dice, Resolve Sightings, Player Actions, and (optional) Fight Pennywise. Once a turn is over, the dice are passed, and the next player follows suit.

Rolling Dice determines where Pennywise appears as well as what actions the player can take. The dice have Hands, Hearts, and Balloons, with colors matching board locations.

To Resolve Sightings, Pennywise takes tokens from specific locations, increasing his strength there (and pushing it toward a point of no return). Most tokens are Victims added to the Evil Influence track, but Red Balloons increase the chances of losing a fight with the clown.

Pennywise will also jump to one of these locations, although he won’t attack. The monster only does this as his Evil Influence track fills, preferring to let the Losers come to him. 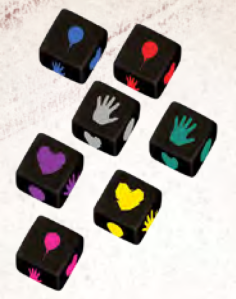 Once all Balloons (and any attacks) are finished, Players use Hands and Hearts to take actions.

Hands allow a player to draw a Totem card from specific locations and add it to their collection. Hearts either allow players at the matching space to regain Bravery or to rescue a Victim (returning a token from the Evil Influence track).

While usually dice can only be used in specific areas, Hands and Hearts can be used to Move (one space) regardless of color. This action is essential, as you add Totem cards to your Fight Stack by moving into (or through) matching locations.

The final action is optional but necessary to win the game: Fight Pennywise. The active player must be on the clown’s space and declare this action; others may join if already there (or have a Bike token to travel instantly). 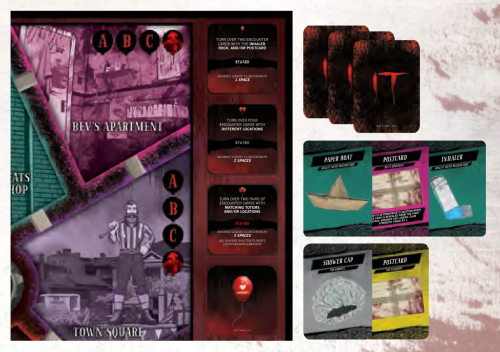 Fighting the monster is a game of pushing your luck, where you turn over cards from the Fight Stack. This deck begins small, but increases as you add Totems (or “IT” adds Attacks) and is shuffled before each battle.

The goal is to keep turning over enough Totem cards to match the criteria of Weaknesses, a series of goals divided by difficulty (and reward). Matching any (or all) allows the Losers Club to advance on their Strength track, and eventually win the game.

Unfortunately, players receive no reward until they stop revealing cards, meaning they must push their luck for harder goals. If an Attack card is flipped, all Totems are discarded, and the team receives no reward (only consequences).

This aspect is where the game becomes one of randomness and guessing. Are there enough Totem cards in the Fight Stack to reduce the likelihood of drawing an Attack? 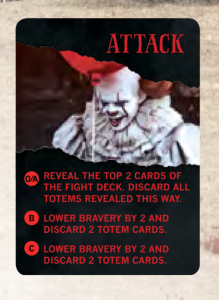 The consequences of an Attack are harsh and depend on how powerful Pennywise is at that location (how many empty balloon slots). Bravery is lost, Totems discarded, and even the Strength track may move backward.

Luckily, the more Losers present, the more penalties can be divided among them. It’s never wise to confront the monster alone, although there may be no choice if “IT” suddenly attacks.

This game is asymmetrical in that there is only one way for the players to win: advance the Strength token by completing successful fights with Pennywise.

In the meantime, everybody loses if any four criteria are met. If the Evil Influence track is full, three of seven locations are ravaged (no balloons), no Pennywise’s Attack deck is empty, or a character is lost (Bravery reaches 0), then “IT” has won. 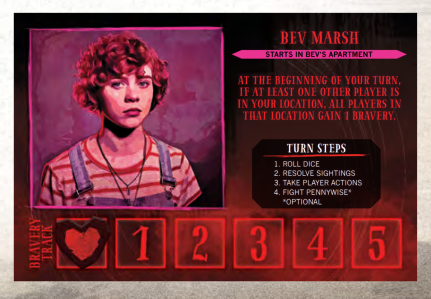 This asymmetrical, cooperative, and randomness is reminiscent of games like Arkham Horror or Thanos Rising and should add to the suspense. Unfortunately, whereas those games are a lot of fun (even if frustrating), IT: Evil Below falters from several flaws.

The first problem is the repetitive nature of each phase, as everything becomes rote. Players just move around the board, “stamping out fires,” while picking up and dropping off Totem cards.

The Totems are all the same seven items (a paper boat, an asthma inhaler, etc.), only changing in color/location. After a while, there’s nothing new or exciting about what’s drawn, and you just want to drop it off and fill your Fight Stack.

The second problem is randomness is too powerful in this game and can set you up for automatic wins or losses easily. Some games have Pennywise mostly inactive, while others the players have no chance before “IT” is ravaging Derry or taking out a character.

The final problem is the production value, which is as inconsistent as the gameplay itself. The gameboard, movers, characters, and tokens are lovely, with beautiful artistic renderings of movie stills.

They contrast significantly with the Pennywise Attack cards, with screen captures that look like they were pasted with Microsoft Paint and given unreadable fonts. Similarly, the instruction manual is poorly laid out, with a horrible font and is hard to follow. 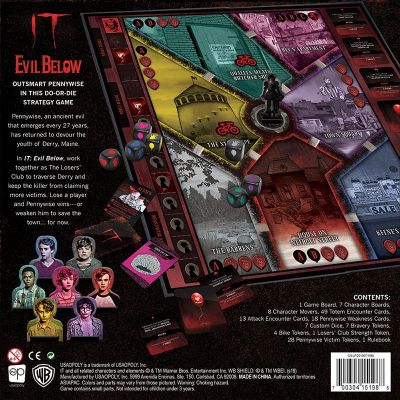 IT: Evil Below, unfortunately, fails to capture either the feel or horror of the movie, unlike games like Jaws. The rote mechanics could have any other franchise thrown on them, and the gameplay would be the same.

Although USAopoly’s product is fun at first, it loses charm (and replayability) fast, and will likely only be pulled out for new players or during the Halloween season. If any of the above critiques (rote activity, RNG, or art quality) were fixed, this game might rank higher, but I found it to be an average experience overall.

I give IT: Evil Below a floating 3 red balloons out of 5.