In the age of the Internet, YouTube, and social media, memes and viral sensations continuously shift. What may have been popular even a year ago may slowly fade to be replaced by the latest funny pictures, video, or challenge.

I’m not saying that some things don’t stick with us and become embedded in pop culture, but it’s rare to find those that last the “ages” (which amounts to the past 20 years these days). Those viral sensations, even from the early days of the Internet, have something about them that resonates even with viewers born after they happened.

Even rarer, however, is when something from the Internet has enough of a following to warrant an entire board game based on it. Which is how we somehow ended up with Trogdor!! The Board Game, based on the early ‘00s Homestar Runner flash animations and website.

I’m not saying I didn’t want it, but it’s amusing that a single cartoon skit (from 2003) would somehow turn into a full tabletop game. I’m still not sure if it’s because Gen-X and Millennials are now game designers, today’s youth recognize the references thanks to pop culture, or Trogdor is simply eternal.

Join us in a world of fantasy and badassery, as you play the followers of Trogdor and help him in his mission to burninate everything. Avoid the knights and archers, burn the peasants and thatch-roofed cottages, and bring about the doom foretold in ancient prophecies!

Trogdor!! is a cooperative game where players take turns moving the man, err dragon-man, err, dragon, around a series of tiles. The game ends when Trogdor completes his mission to leave everything burned up (and no peasants left alive), or when the defenders of the kingdom finally defeat your god-man-dragon-thing.

Each player portrays a different Keeper of Trogdor with a unique Item bequeathed upon them. Both the Keeper and Item provide different abilities or effects, although the Items are often single-use or require a specific action to recharge.

A player’s turn is broken into two phases: Trogdor’s Actions and Board Actions.

During the Trogdor phase, the player draws an Action Card, which provides Action Points (AP) as well as any special rules for that turn. You use AP to do things like Move one step, Chomp a Peasant (gives you health), Burrow through the Tunnels (traversing the board), or even Hide in the Mountain (where you’re safe).

Of course, the other action you can perform is to Burninate, which has a variety of effects.

The whole object of Trogdor!! is to Burninate every Tile and Cottage, and get rid of the Peasants. Tiles are the easiest, as you simply flip them over to their “burned” side, although the Lake has special rules.

Cottages are more complicated, as they require not only the Tile they’re on to be flipped but also every Tile around them. Once that’s done, you flip the Cottage token over to its burning side.

The most fun is Burninating Peasants, which can do the most “damage” to the board. When you light a Peasant on fire, they draw a movement card and travel across the board, Burninating every Tile they cross.

Also, burning Peasants will light Cottages (if they meet the rules) and other Peasants on fire, causing a chain reaction of running, flaming people. If they end their movement on the Lake, the peasant douses themselves and lives; otherwise, they are burned to ash and enter the Void. 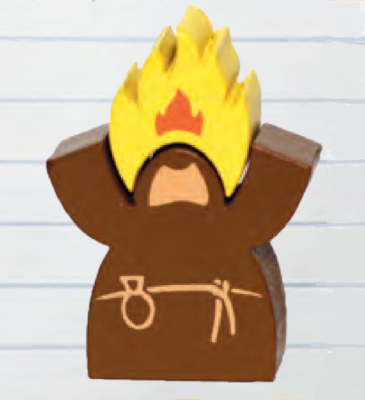 Once Trogdor has finished their phase, it’s time for the Board to react. A Movement Card is drawn, which may spawn more Peasants, move them, and then allow the Knights and Archer to move (and possibly attack).

Peasants are taken from the Trog-Meter, which represents Trogdor’s health, but only if there aren’t enough on the board. Each one then moves once in a given direction; there’s also the option to Move & Repair, which means they’ll flip Tiles back over!

Knights then use the Movement Path side of the card, and if they cross over Trogdor, he takes damage. Knights don’t repair Tiles, but they will fix Cottages automatically, adding to the difficulty.

Similarly, the Archer follows the Movement Path, but neither affects the burned areas of the board nor does it harm Trogdor just by crossing over him. Instead, the Archer proceeds to shoot left and right in a line; only if the dragon’s in that line is he “arrowed.”

Should Trogdor have no health left to lose (no peasants on his Trog-Meter), then the villagers have won! Trogdor is defeated, the Keepers lose, and the land is safe from burnination… maybe.

Trogdor has one last Fiery Rage upon that final damage, where players draw Movement Cards and sending him across the board (similar to the burning Peasants). He Burninates everything he touches (regardless of previous restrictions), and if he manages to complete his destruction, the players win!

For such a simple-looking game, that’s easy to learn and play, Trogdor!! has some deceiving strategy to it.

For one, Trogdor’s health is measured in the Peasants on his Trog-Meter, which only recharges if you Chomp them. You’re given a tough choice between restoring your health (from damage or spawned Peasants) or Burninating them to cause the most damage to the board.

Similarly, using abilities like Burrow or Hide, the right Action Card effects, and your Keeper and Item powers, are all important to winning the game. The Knights and Archer are erratic, and they can end up moving in odd ways that cause damage to you if you haven’t protected yourself.

Worse, the first time you take damage, the game adds a third Knight that occasionally moves twice a turn. This Troghammer ups the difficulty in completing your mission, so your best bet is not to be damaged in the first place. 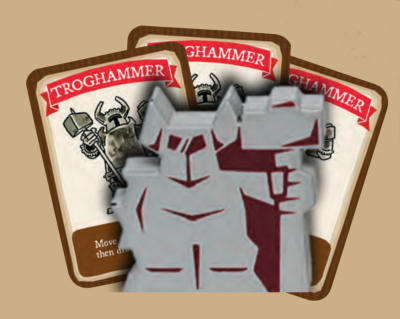 Another fun aspect is that the game openly encourages people to act as silly as the original skit. The entire rulebook is full of Strong Bad’s hilarious language, comments, and “editing;” meanwhile, the rules encourage you to make a character out of your Keeper and to yell things out like “ARROWED!”

Playing this game brought back many fond memories of Homestar Runner and the Strong Bad Emails. I’m not sure if that was particular to our group (who were all fans from that era), however, or if this was an “in-joke” for us Gen-X and Millennial crowds.

One small critique is that Trogdor works better with more players simply because they’ll have more Keeper and Item effects to help the dragon. Solo play is challenging, as you’re limited in what you can affect or do, giving the board more of an edge during its phase.

Luckily, the designers recognized this and provided some FAQs, including rules to make solo play easier. 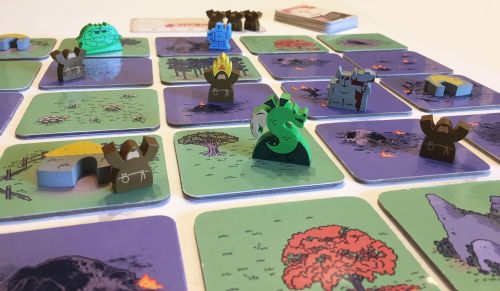 Either way, I believe Trogdor!! has proven you can take a viral Internet sensation from over 15 years ago and turn it into a fun, comedic gaming experience. Now I just need the GI. Joe Fensler Film’s tabletop game!

Get your fellow Keepers together to fulfill the prophecy and help burninate the countryside.