Whoooboy. It’s the first episode of the final season of Supernatural and Paul and I are here to do a deep dive into this episode and the season overall as we wait to see just how they wrap up 15 years of angst, humor and family drama.

Warning: Massive Spoilers Ahead for Every Season of Supernatural

Belle
Let’s get into the continued building of the mythology of the show right off the bat with the introduction of Belphegor, the demon who jumps into Jack’s body. First of all the scene of them running from everything, with Castiel carrying Jack’s body as Dean and Sam cover them is just heartbreaking, beautifully choreographed and acted. The pain each actor conveys at the events that they are facing and all that’s happened to lead to this moment is just fantastic.

Then there’s Belphegor who I knew sounded familiar: one of the Seven Princes of Hell, the epitome of laziness who seduces people with quick fixes for their problems and who is utterly obsessed with destroying beauty and nobility; which I think is going to become a major plot point. Here we get to see Alexander Calvert’s range as he really goes all in to show just how different Bel is from Jack, while being really, upsettingly, creepy regarding Dean.

Paul
Bel is definitely interesting as he certainly isn’t there to help the Winchesters. Also, since all hell is free, I am sure we will see Crowley before the end. Then there’s Sam’s wound.  Will he be Chuck’s vessel of Armageddon? Either by resurrecting Lucifer or releasing the crazy Michael of this universe or will it be something even worse?  In regards to this episode alone, I loved the throwbacks to season one bad guys but I hope they don’t do that all season. 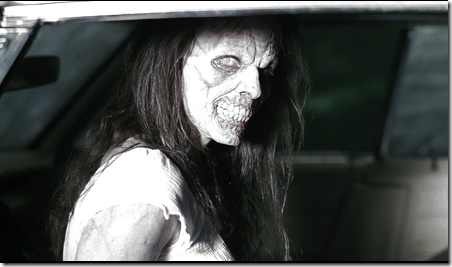 Belle
Agreed. I don’t need an episode by episode shout out to every monster of the week from previous seasons. In fact, I absolutely don’t want any monsters of the week this year. I need them to stay on the Winchesters and continue the trend of the last few seasons of narrowing down the focus back to the Winchester Family and their complicated dynamics because right now that family is a damn mess:  Dean is still super pissed at Cas for even putting him in the position of having to kill Jack because he didn’t tell Dean what was going on with him. Also? Cas not telling Dean what was going on with their son directly led to Sam and Dean losing their mom. Again.

Cas is spiraling because he knows he screwed up; found out his Father is trash on an epic level and has been manipulating him his whole existence; and is still lying by not telling Dean about the deal he made with The Shadow. Then there’s poor Sam, the lone voice of reason in this mess, who is infected with Chuck maybe?

Last but not least since I watched the previous finale and the premier back to back: Jack is currently trapped with the two entities that have basically told his dads that they’re going to kill them: Billie for Dean and The Shadow for Cas.

Paul
Cas is withholding way too much from Dean. He needs to just spill it about The Shadow. Especially given all the crap he and Sam have given Dean repeatedly over the years about keeping things from them. This is friggin’ huge and his last secret has already blown up in his face. They’ve already lost their son and mother because of Cas keeping a huge secret, how on earth does he think this is going to go?

Since the season is abbreviated to 20 episodes, I too hope they just stick to the main plot instead of doing the one off monster of the week shows. This episode made it clear that it’s not necessary as the weakest link was the mother/daughter subplot. Their acting was deplorable, cardboard cutouts would’ve had more emotion. They could’ve cut their entire plot out it, given us more of Cas and Dean’s relationship falling apart and Sam interacting with Bel in his dead nephew’s body and it would’ve been ten times better.

Belle
My Chuck they were awful. That little girl was an idiot and dead eyed which is unusual since they usually do such a good job with casting children. The only subplot we need is what’s going on with Jack, Billie and The Shadow in The Empty. Anyone or thing that’s not the Winchesters needs to directly feed into their previous trauma and be solely focused on the family. Nothing else.

Paul
Or, I hate to say it but, kill anyone who lands in their path. Innocents getting slaughtered builds the angst due to what Chuck hath wrought.

Book of Letters
That mention of Alistair does not fill us with confidence. At all.

Bel fangirling over Dean’s everything is both hilarious and so very gross considering he’s in Dean’s son.

Visions Of The Future
Belle
There’s more than an even chance that it was Samifer in the vision that Cas and Sam got when Cas touched Sam’s wound, which is unpleasant.

Paul
Which is why I think Chuck is going to try to set up the title fight that never happened: Adam!Michael vs. Lucifer!Sam

Belle
Yeah, but Chuck is definitely scared of one thing: Billie. Death’s the spanner in the works because they’re going to reap everyone, just like they told Dean way back in Season Five.

Paul
Agreed, I think Chuck will be reaped…but Dean will be Death in the end, as he always should have been. Sam gets to go to heaven and be with his girl, mom and dad but Dean will end up being Death. Jack will stay on earth as a modern day Adam…

Belle
…. and Castiel will become The Empty. Dean and Cas will be together for eternity as the End and Beginning of Life itself.

Belle
Please show, make this happen. It’s the bittersweet ending we and The Winchesters deserve.

These are our thoughts on the premiere of Supernatural: The Final Season what are yours? Let us know in the comments!

1 Comment on TV Brew: Supernatural – Back And To The Future