PCU has been quite adamant about its articles on cosplay and consent. We’ve written extensively on the topic, decrying those who use cosplay as an excuse for sexual harassment (or even assault).

We can’t reiterate this point enough, at least until the behavior becomes practically non-existent and the entire industry is united against it. There is more to be said, however, on the topic of costumes and consent, as this issue stretches beyond the convention halls and comic stores.

Opening for its latest season this coming weekend is the Maryland Renaissance Festival, an event with huge crowds, tons of staff and performers, and a loyal following of “regulars” (aka Playtrons or RennGeeks). I’ve written in the past about the similarities (and differences) between the Renaissance Festival and your local convention.

One of those similarities is the number of people in costume, or “garb” as Rennies and Playtrons say, and the problems they face. All the same rules we’ve mentioned apply, and yet harassment (or worse) still occurs, possibly on a different level from standard conventions.

So, I’d like to reiterate once more that “costumes do not equal consent” and discuss why the Renaissance Festival often has other problems amplifying the issue.

Renaissance Festivals are huge, outdoor events with live music, street performers, vendors, and (of course) alcohol. They often have more in common with Burning Man or SXSW than they do NYCC, Dragon Con, or Anime Expo.

Many RennFests host several pubs, and you can’t walk ten feet without someone drinking beer, cider, or wine. Of course, many attendees also enjoy themselves a little too much, and a drunken incident is all too common.

Booze is a significant factor behind a complete lack of respect and civility when it comes to other people’s rights and personal space. The amount of times some drunk has touched someone, leered at cleavage, or tried to reach up a kilt is too damn high.

There is no justification for this behavior, and if you can’t drink without acting like this, then don’t drink. Alcohol is not an excuse – just because you’re drunk, doesn’t mean you get a pass on reprehensible (and criminal) behavior.

If anything, you’ve got deeper problems beyond alcoholism if you feel it’s appropriate to sexually assault people just because your inhibitions are lowered.

Our Garb is Not Always a Costume

To many Rennies and Playtrons, what we wear is not a “costume”, it’s simply our chosen outfits for the events. No different than our favorite cocktail attire or clubbing outfits, we consider these normal clothes.

Unlike cosplay, few of us dress as a specific character or for photographs and attention. Our outfits are usually put together over years (or decades), reflect our personalities (not fandoms), and are used to blend into the Renaissance Festival (rather than stand out).

If you were at a club and harassed someone wearing a see-through shirt, you’d be thrown out. If you were at a concert and reached up someone’s mini-skirt to “see if they were wearing underwear”, you’d get arrested.

Why would you think it’s OK to do the same to someone in corset or kilt at a Renaissance Festival?

Being Sexy is not an Invitation

One of the running jokes at a Renaissance Festival is how much cleavage you’ll see. Bodices and corsets run rampant, and many women wander with everything spilling over (and some things even stored there).

Similarly, men often wear hose (with a codpiece) that presents a visual target, even if probably embellished. Or the men wandering in kilts, who enjoy showing their legs and might be “going regimental.”

Sometimes people wear these things to look nice, while other times they might want to feel sexy or attractive. Regardless of why they’re wearing revealing (or potentially revealing) clothing, that’s not an excuse to harass or assault them.

Just like cosplay, wearing garb doesn’t mean you’re asking for attention or into “ye olde sexy time.” A woman with overflowing cleavage “wasn’t asking for it” and you should never do a kilt-check without permission.

Some RennGeeks merely like to look good (or happen to), and that’s no more an invitation for harassment than someone out in the real world.

Careful With Those Eyes (and Cameras)

Cosplay and cameras go hand-in-hand, but not always. You should still ask before taking a picture and remember that not every cosplayer has the time (or wants) to be photographed.

These rules apply even more to Renaissance Festivals, where many are just enjoying being part of the experience rather than expecting attention. Although Playtrons are “in public,” it’s no different than if you saw someone walking down the street in a cool outfit.

In fact, that’s precisely the case, except the streets are usually gravel, and you’re wandering through a mock-16th century English village.

No matter how cool, sexy, or interesting someone is dressed, always ask permission. Also, for the love of everything, please don’t leer at people – if you wouldn’t do it in public, don’t do it at a Renaissance Festival (or convention for that matter).

Especially considering, you have no idea who you’re looking at. That young belly dancer? That shirtless Scot? They might be underage.

The Renaissance Festival is often a family affair, and many kids and teenagers were raised as Rennies or Playtrons. The faire is a second home to them, and their parents (and extended RennFest “family”) don’t take kindly to random strangers taking unwanted photographs of children.

Even if they’re not underage, that’s still no excuse to zoom in on people’s cleavage or up their skirts. (Yes… that’s happened.) 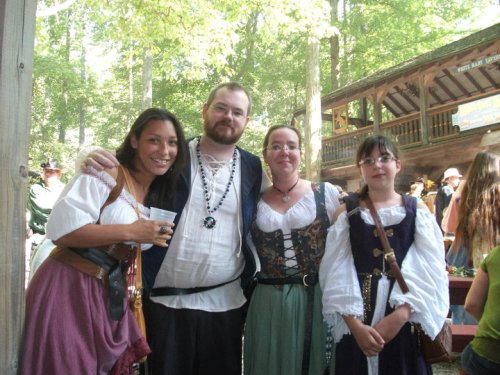 “Is There No Respect of Place, Persons, nor Time in You?”

Shakespeare was presenting Malvolio as a pompous jerk with that quote, portraying the steward as a curmudgeon out to ruin everybody’s fun. The phrase, however, is applicable for all those who think they can do whatever they want because of how people dress.

It doesn’t matter whether someone is garbed like the Scarlet Witch or a wench; nobody is asking for unwanted attention let alone being touched. If you can’t understand that, then you’re a reprehensible (and possibly criminal) person who shouldn’t be out in public.

The Renaissance Festival is tempting for people like that, with the ample bosoms, rising kilts, and flowing alcohol. If that’s how you’re going to act, however, then stay home – you’re not welcome, and you will be promptly removed.

Eat, drink, and be merry, and act like a respectable human being.

(We’d like to thank Liquid Lindy Photography for allowing us to use their photographs. In addition, the featured image was taken by Valeriy Lukyanenko and provided by the Maryland Renaissance Festival.)

9 Comments on Renaissance Festivals – Costumes are not Consent