I talked a bit about how RPGs and politics can (and do) crossover; that gaming is not exclusive to “fun” or that covering social and political issues can’t be enjoyable. Commentary on society is nothing new in tabletop RPGs, from anarcho-capitalism and race issues to fascism and eco-terrorism.

Lately, though, it seems that games have changed as we’ve become more fired up, whether because of the information (and people) on the Internet or due to changes in our government and society. Games are becoming more flagrant in addressing these issues, sometimes positively and occasionally not so much.

Enter the most recent addition to the politically-charged RPGs, Sigmata: This Signal Kills Fascists.

Although set in an alternative 1980’s where a resistance fights an authoritarian regime, Sigmata directly targets modern issues like bigotry, privilege, and fascism. While many title and credit pages have some blurb about having fun, being considerate, the golden rule, etc., the authors come out swinging with the following: 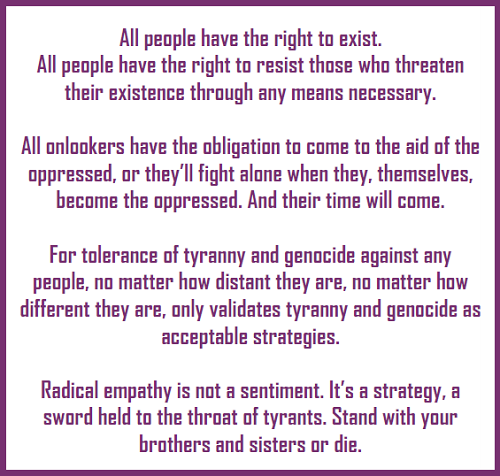 The writing doesn’t stop there with its focus on the alt-right.

Flavor text calls the fascist “a wailing, heaving toddler, told by men- far more cynical than he- that his tantrum is an expression of mythology and a defense of his birthright.” They talk about the discomfort and persecution complexes that drive these individuals into willful ignorance, hatred, and dictatorships.

The authors also quote Murri activist Lilla Watson: “If you have come here to help me, you are wasting your time. But if you have come because your liberation is bound up with mine, then let us work together.” In other words, our liberty is intertwined with everybody else’s; freedom for all or freedom for none.

In a gaming industry where “faux-centrists” whine, “Why do you have to bring politics into this?” while simultaneously supporting anti-SJW movements, Sigmata is a kick in the face. 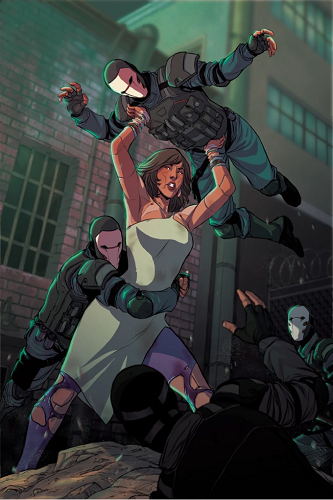 Although set in an alternate history, Sigmata has no qualms equating its antagonists with the Trump Administration and the modern GOP.

In a world where McCarthyism and the Red Scare continued unabated, Joseph McCarthy served as an ineffectual, unethical one-term President. His legacy of xenophobia, homophobia, and homogeneity, however, lived on in cultural norms, government programs, and national legislation.

Eventually, a new paramilitary agency is created and tasked with policing the country on a national scale. The Freedom Fist represent the worst of federal and local police – rounding up immigrants, enforcing the laws with a heavy-hand, arresting those who practice “immoral” (and therefore illegal) sexual behaviors, and targeting “dissidents” who dare criticize the Regime. 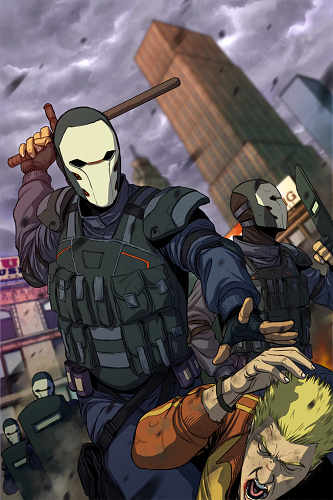 The allegories are all too real, from the “blue code” that makes good officers complicit in the actions of the bad, to a federal administration attacking the free press and protestors. Even the concept of “the people” allowing these things to happen is eerily similar.

Sigmata explains that not everybody is evil, and most are decent people inside. Peer pressure, social norms, and self-centered beliefs, however, often drive individuals to ignore (or even do) bad things, which in turn only lends power to the government.

It’s not the supremacists, extremists, and fascists creating the Regime; it’s every person who caters to them under the guise of “freedom of speech”. Or worse, people who tolerate their vitriol and stand beside neo-Nazis and the KKK, because “at least they agree on taxes, guns, or abortion.”

This game definitely takes a jab at moderates and those who “want to stay out of it.” Fascism occurs when you “agree to disagree” when it comes to bigotry or oppression, all because you’re more focused on yourself over the bigger picture.

Of course, this is only one part of the story, as you also have the players’ side: the Resistance. A conglomerate of different anti-Regime movements and individuals, they represent the fight against the fascist state.

Although the Resistance consists of everyone from hidden sympathizers to paramilitary cells, players portray “Receivers,” a cybernetic being serving as the vanguard against the Regime.

At some point, during the Regime’s attempts at creating super soldiers, their experiments went wrong. The subjects got lose, and the data found its way into unknown hands; now, the Resistance uses radio signals to empower the Receivers in their fight.

When Sigmata talks about repeating the signal and how it kills fascists, they mean it figuratively and literally. Not only must the Resistance repeat the signal of anti-fascism, but their primary weapon is activated when the signal is received. 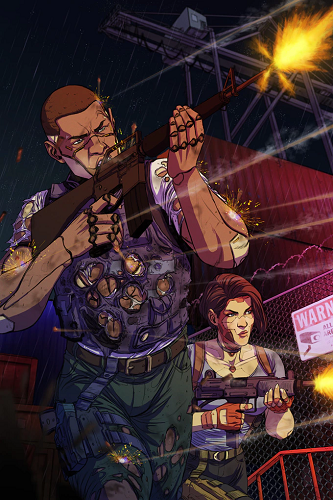 The Resistance is not a unified group, however, and it’s nice to see the writers create an allegory that targets more than the alt-right.

The players’ allies include uncounted individuals from disenfranchised groups, including women, PoC, LGBT+, etc., and these are often for who they’re fighting. Despite this, the Resistance receives much of its support from four different (and oppositional) factions.

Each of these groups is an allegory for a real-life, privileged group that has often shown no care (or even hostility) for the disenfranchised. From survivalist veterans to socialist academics, fundamentalist Christians to corporate big-wigs, these factions either ignored fascism as it occurred or cheered it on (while it helped them).

Unlike the real world, though, some began to see the error of their ways; as the government tramples on personal freedoms, violates tenets of faith, or puts personal wealth at risk, they find themselves siding with the Resistance. That doesn’t mean they get along, as each faction has its own goals and tries to use the movement toward their own ends.

Players may be the super-powered heroes of the Resistance, but they must deal with conflict among their ranks (and leaders). Fascism is the enemy, but sometimes the most significant trouble comes from your own allies. 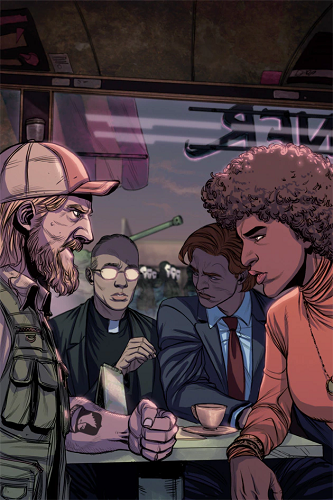 One thing I was conflicted on was the inclusion and emphasis on real-world 1980’s tech and pop culture. Sigmata is an alternate history, but they include numerous references, graphics, easter eggs, etc. all drawn from the decade of neon, leg warmers, and glam.

I’m a child of the 80’s, and I loved the style but felt a disconnect between the vision of an authoritarian America. The fashion, music, entertainment, etc. of the era arose from optimism following the crises of the 1970’s; everyone was looking at a future so bright, they had to wear shades.

It’s hard to imagine these styles developing in a world where McCarthyism continued, and xenophobia was on the rise. Although the 80’s was a capitalist society, so much of its pop culture originated in feminism, minority culture, and the LGBT world.

I believe the idea was to reflect our real-world, where we often go on about our everyday lives without thinking about the very real persecution occurring around us. That “the people” would be so distracted by synthpop, shopping malls, and arcades, they’d ignore jackbooted thugs checking papers, grilling minorities, and sending gay people to concentration camps.

Unfortunately, that’s an image more suited for the gritty, urban 90’s or today – I think the 1980’s wasn’t the best veneer for a story about fascism. 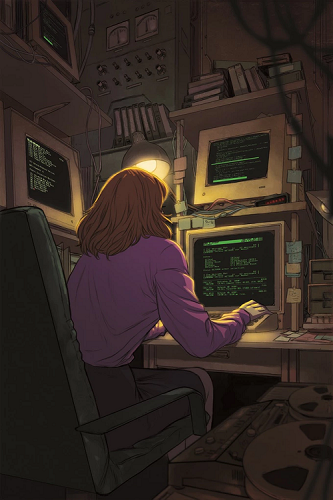 An exciting way they integrate the 1980’s, however, is through technology. Inspired by the Arab Spring, which had to rely on decades-old tech after governments restricted Internet access and cellphone towers, players live in a world where they fight fascism through handprinted zines, pirate radio stations, and Bulletin Board Systems (BBS).

Sigmata almost doubles as a “Resistance Handbook,” providing advice for characters based on real-world models. The writers cover coordinating demonstrations, the ethics of rebellion, insurgency strategies, and anything that might help the players succeed at their mission.

This RPG also plans for an end-game, with the players defeating the regime and warnings about what happens when afterward. The authors discuss the probability of factions splitting off, pushing their ideologies, and the danger of instituting a new regime if not careful.

Although couched in gaming jargon, with dice, tables, sheets, etc., there’s no doubt the authors researched the topic of anti-fascism and left a not-so-subtle message about where we are and where we might be headed. 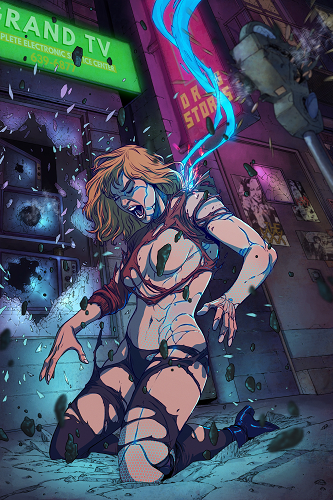 I could go further into the game’s mechanics, which contains aspects of both coop/story-driven systems as well as more classic style, but I think the setting and theme are what sets this game apart.

No doubt, it will raise the ire of those on the far right, with its heavy-handed Antifa message. The game will also irk the “faux-centrists,” who’ll either label it as more “SJW” propaganda or think it doesn’t apply to them.

Interestingly, Sigmata also came under criticism by some progressive and “leftist” individuals. They initially considered some artwork as “misogynistic crap”; ironically, feeding right into the purist ideologies about which the game warns.

Either way, this RPG is unabashed about who it’s targeting and its allegories. From the tiki-torch wielding white supremacists and the bigoted politicians to the “me first” libertarians and the “purist” socialists, this is a no-holds-barred game about the dangers of our social and political climate.

If that sounds fun to you, then, by all means, Repeat the Signal.