Like so many others, I had pre-ordered Guerrilla Games’ new PS4 exclusive, Horizon Zero Dawn, and I picked it up last night after work to give it a run-through. One word for you, dear readers: WOW. This thing is FUN! I barely noticed time passing, and I was awake far later than I probably should’ve been. Getting up for work this morning was a struggle, but I regret nothing.

Those of you who follow our adventures here at PCU know that several of us have been pretty hyped for this title. Since its announcement at E3 2015, PlayStation gamers, like some of us here, have been virtually frothing at the mouth about this game.

So let’s get in & talk about Aloy’s adventure.

Presentation:
Once the game began, it was made just about perfectly clear to me that the deep story was going to be one of the best parts of this game. The tone of the story was immediately able to grab my attention and make me care about the lore of this game, as well as really want to find out what came to pass which left the world in such a state.
Graphically, this game is beautifully crafted. The coloration, the sense of expanse (or “draw distance”, if you will), and the attention to detail that Guerilla Games put into this title is amazing. The game is optimized for play on a PS4 Pro, but I played on a standard PS4 and I was still blown away by how pretty everything is. Seriously: if/when you play this game, take a moment to stop & look at the gorgeous scenery when you’re in one of the map’s wider expanses. There’s almost a sense of Zen in not seeing a bunch of people aimlessly milling about but in looking instead at how nature has re-taken the planet, and just how HUGE this map is.

Gameplay:
Those of us who have been gamers for some time will be able to note that Horizon Zero Dawn seems to borrow things from the more well-done parts of several different games.
Starting with the movement mechanics: Aloy’s sneaky stealth movement through the tall grasses and the way she climbs up the sides of cliffs is very reminiscent of the movement animations & mechanics in the Assassins Creed franchise, while the way she strikes from cover and out in the open evokes a good bit of Lara Croft from the most recent Tomb Raider title. You can tell that Aloy is quite strong, but the constant sense of danger when moving stealthily around the larger (and pretty terrifying) enemies really heightens the tension and reminds you that she is still quite vulnerable against these mechanical beasts. 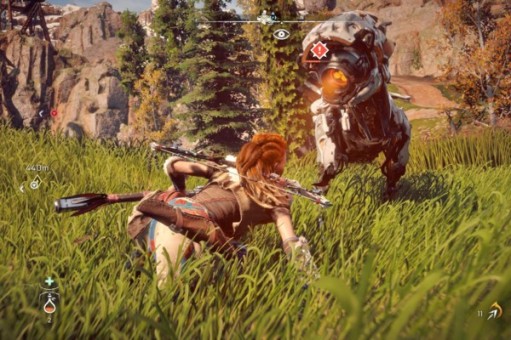 Next, in looking at the resource gathering & crafting system, I was immediately reminded of Far Cry: Primal. While my inventory kept filling up relatively quickly, it was nice to see how smooth Guerilla Games was able to get the menus & crafting to feel. The learning curve on the crafting system isn’t very steep, and I kind of took to it right away. Inventory management, however? That’s a bit of a different story. It took a bit of feeling out before I came to realize what I could part with and what I really needed to keep.

Last, but certainly not least, there’s the combat. Now, those of you who like a good challenge will appreciate how strong some of the enemies in this game can be. A word to the wise: you probably WILL get one- or two-shotted in this game a few times, but once you figure out how to locate and exploit the weaknesses of the larger enemies, the combat feels fluid & quite comfortable. Additionally, the ease with which I was able to switch weapons & craft ammunition on the fly, make quick decisions with the wheel-style weapon & gadget menu, and aim my ranged shots accurately added a good bit of appeal for me. After a bit of practice with the combat, and familiarizing myself with the skill trees (seriously: learn these), Horizon Zero Dawn really gave me the feeling of being a skilled warrior going up against what seems like pretty steep odds. A word of caution, though: if/when you play this game, DON’T. GET. COCKY. Aloy may be skilled, but if you’re not fully prepared for a battle, you WILL die…a lot. 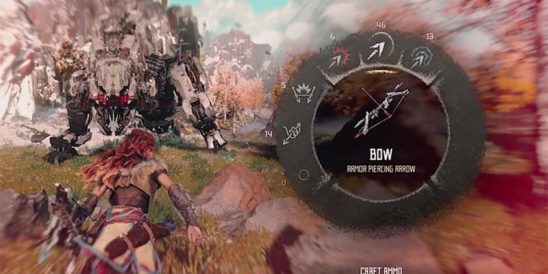 Final Thoughts / Pros & Cons:
Pros: First and foremost, this is a GORGEOUS game. I’m a sucker for beautiful expanses & detailed characters, so this one really hooked me. I had to remind myself to keep the story going while I was playing, as I found that I would occasionally just stop in the middle of the plains & look around in awe at everything in the world around me. From the expansive plains to the snowy forests, to the mountainous areas, it’s definitely a feast for the eyes.
Secondly, the combat is fun & immersive, and cool terrain traversal (sliding to cover, what?) allows for multiple ways to approach a quest or enemy. This is just one of the things that keeps the title from feeling too linear, and makes it a good way to familiarize oneself with multiple different weapons & gadgets that exist in this game.

Cons: Like Skyrim or Fallout, there are A LOT of side quests in this game. While that in and of itself isn’t a con, I will say that these quests began to feel a bit repetitive. They also don’t seem to add much to the over-arching story or the lore of this game. However, the fact that this game has such varied landscapes & ways to approach these quests almost redeemed that for me.
Finally, even though the voice acting in this game is quite good, I was a bit disappointed that Aloy’s personality didn’t grab me as much as I had hoped it would due to her facial movements. I mean, this is a woman who is basically a pariah in the world that she knows. Having that be the case, you would think that this would show on her face. However, the slightly stiff motion capture didn’t really convey emotion well.

All in all, this is a great game, and I highly recommend picking it up for those of you who are PlayStation users.

What do you all think of Horizon Zero Dawn, dear readers? Let us know your thoughts on this game in the comments!