On February 28, 2017, Paramount Pictures held an IMAX event which previewed their upcoming live-action take on Ghost in the Shell to select audiences nationwide. Pop Culture Uncovered was lucky enough to be on-scene at one of the screenings and is happy to report on what we saw. 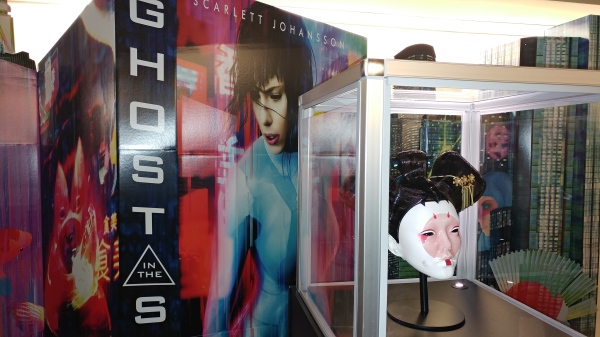 We attended the screening at White Marsh, Maryland, where attendees were given a small print of the movie’s theatrical poster. Attendees also got to see a prop from the film: the robotic geisha mask which played a substantial part in the preview clip we saw (more on that below). Lastly, the screening audiences also got a chance to play with some green screen technology and star in their own short clip of the film.

Now, on to the film.

Spoilers ahead; you have been warned.

Audiences were treated to what appears to be the first fifteen minutes of the movie, judging by both the content and its relation to the original Ghost in the Shell anime. The opening minutes show Scarlett Johannsen’s “Major” being brought into a futuristic hospital following a disastrous accident which destroyed everything except her brain. Following that is the “shelling” sequence in which she’s placed in her new robotic body (a shorter version of this scene has already been released to the public). At least one clever YouTube user has done a side-by-side comparison with the original anime, and the live-action version does incorporate a lot of the original’s imagery even while making conducting the scene in its own unique style.

From there, the preview jumped into a revised version of another familiar scene: the famous opening sequence of the anime in which the Major stands atop a rooftop tower, strips nude to activate her cloaking device, and then jumps headfirst into a police action. Visually, it’s similar to the anime. Story-wise, it’s very different–the original had the Major engaging in a straightforward police action, while the new version has her attempting to foil an assassination attempt on a business meeting with the President of Africa (that seemed to be his name). The sequence certainly emphasizes that this is an action movie, with killer geisha robots (that’s why we saw that mask on display outside the theater!) taking on a ScarJo who leaps and kicks her way across the screen.

The sequence ends with the Major getting a strange message from one of the Geishas–ostensibly, the film’s first hints at the anime’s Puppet Master–and the Major being visibly shaken by it. After that, the audience was exposed to a more traditional trailing showing quick,snippets of the rest of the film.

Filmgoers and producers alike may be hoping that this movie does for anime what Iron Man did for superheroes. That said, there’s two issues I had with the brief chunk of Ghost in the Shell that I got to see. First: Ghost in the Shell needs to impress people, and that’s getting harder and harder to do in our CGI-saturated society. The original Ghost in the Shell anime appeared to be groundbreaking in 1995, and indeed, its animation still holds up even by 2017’s standards. However, that doesn’t necessarily translate to modern filmmaking, and the live film may have overdone it just a tad. The “shelling” sequence is fine, but the “rooftop” portion is extremely busy compared to its source material. Kusanagi’s rooftop presence in the original was impressive, but also quiet and allowed audiences to breathe in this vision of the future.

In contrast, the live film’s CGI shows a very busy, hologram-laden megalopolis which had a lot going on and was visually overwhelming. It eventually slides into the familiar–when we see ScarJo standing on the rooftop, you just know it’s that scene–but it’s a bit of an eyesore getting there. All this CGI, and the fight sequence that follows, would have looked great in 1999.  It did look great in 1999 when they called it The Matrix. But this is almost 20 years later, and in terms of cinema, doesn’t show us much that’s original.

The deeper potential problem is that the live action film may be sacrificing substance for style, as western films so often do. That’s hard to judge from a 15-minute clip. What I will say is that the original anime–and the manga even more so–was a deep, thought-provoking film that asked disturbing questions about what it means to be human in a post-human, cybernetic world. If the body is removed from the mind and the soul, how much of a person can be left? If thoughts and memories are malleable, how responsible are we for our actions? And if thought is nothing more than a complex series of electrical impulses, then who is to say how life is defined?

It’s not clear if the live action film is going to approach that kind of philosophical depth or not. ScarJo’s Major (she’s not called “Kusanagi” but has some other name–it sounded like “Milla”–which is more appropriate to a white woman than a white woman playing a Japanese part) is literally a brain in a shell, while the anime suggested that Kusanagi was far less than that. Stripped of her humanness, Kusanagi tended to be a relatively emotionless person, bent on her police mission and not particularly bogged down by her nature. ScarJo’s character, on the other hand, looks like she’s more perplexed by the prospect of being a brain without a true human body, living an imitation of real life.

The preview clip, combined with the “trailer” portion at the end, suggests that ScarJo’s Major will be dealing with a larger conspiracy theory and questioning how human she is now that she’s mostly robot. It could be that the trailer was fooling us–Hollywood is notorious for manipulating previews to draw in larger audiences. Still, one of ScarJo’s strengths as an actress is her ability to go cold in her facial expressions, and I anticipated that this made her a good fit for Kusanagi’s character even if she isn’t Asian. But ScarJo’s expy version of Kusanagi is, so far, the opposite of the emotionless Kusanagi, so it’s not the strict adaption we might have been hoping for.

None of this is to say that the live Ghost in the Shell is bad, and maybe it’ll surprise us at one of the better sci-fi/action films of the year. However, the deviations from the original anime are enough to remind us that the 1995 original was damn near perfect–so why recreate what was already beyond acceptable? This could be fun–and let’s face it, we’ll probably end up seeing it anyway–but we’re a little nervous going in.

Ghost in the Shell opens March 31. Thanks to Allied Baltimore for the early screening opportunity.