Are games for fun or education? ¿Porque no los dos?

That philosophy seems to be at the heart of John Coveyou’s work. Known for multiple games that also teach, we’ve covered two of them here already: Cytosis and Subatomic.

Their latest product is no different, with all the trappings of a classroom but the enjoyment of a great board game. That’s why I’m proud to say that Periodic: A Game of the Elements is another excellent addition to Genius Games‘ catalog.

Use periodic trends to move across the board and research the elements, completing scientific goals, and advancing academically. The player who’s earned the most points during this process is the winner and Master of the Periodic Table!

Periodic uses a simple turn mechanic where each player moves their Flasks across the periodic table, trying to land on specific Elements. After they’ve moved, they research any Goal-related Element they fall on and collect any completed Goals, as well as possibly advance on the Academic Track.

Movement is performed in two ways: using a single Periodic Trend (and earning Energy) or performing multiple Periodic Trends (by spending Energy). Energy sits on each Trend and is replenished there whenever someone uses various Trends in a row. Players regain Energy by taking whatever has built upon the one Trend they use.

Five Trends exist, allowing you to move in a specific direction: right-and-up, left-and-up, right-and-down, left-and-down, or following the Atomic Number of the Elements. You can move any number of spaces from 1-5 and four of those Trends you can mix the movement (such as left and up, only left, or only up).

The point of movement is to land on an Element that fits the current Goals. Each Goal is based on a specific aspect of chemistry, whether it’s materials used in radiotherapy or highly toxic metals.

End you turn on that Element and you put a Research Cube on it; complete all Research Cubes and gain the Goal, each of which is worth specific points.

In addition to Goals, there are other ways to earn points: incomplete Research, Agendas, and the Academic Track.

Incomplete Research occurs when someone finishes a Goal on which you had Cubes. While the leading player earns the full points (plus a Reward token), anyone else who had Research Cubes earns some consolation points.

Agendas are a hidden card picked by the player at the start of the game. They award more points at the end of the game for earning specific Goals or advancing on the Academic Track.

The Academic Track also awards points the further along you are; you advance by ending your turn on specific Element Groups as dictated at the start of the game. The further along, the more points you earn, but in bigger games only so many people can reach the highest levels.

The game ends on two conditions: two players have reached the final two spaces on the Academic Track, or one set of Goals has been emptied. Once those criteria are met, everyone else receives one last turn, and then points are tallied.

Like so many of Coveyou’s games, there are multiple paths to victory that can turn the tide at the end.

Players may have earned many Goals, but if another person completed ones specific to their Agenda, they could gain a big boost. Also, the position on the Academic Track can net large amounts of points and pull off a win from behind.

Periodic’s strategy is all in the movement, choosing where to move your Flask on the table. Do you focus on researching Elements that match high-point Goals? Are you concentrating on only those Goals that match your Agenda? Or are you also sacrificing moments of Research to end on specific Element Groups, so you advance on the Academic Track?

We played multiple games, and the point spread was often very close, with players pulling off tight wins out of nowhere. No “best strategy” appeared to exist, and that is what makes this game fun and replayable.

I did have a few critiques regarding the design, manual, and player count.

First, as neat as Periodic’s components were, they felt overwhelming. Each player is responsible for a Flask (on the board), a Microscope (on the Element Groups), a Disc (on the Academic Track), and a half dozen Research Cubes. Tracking all of these meeples is hard, especially the Disc, which has the same shape as one of the Goal markers.

Also, the color scheme was not the most accessible, even though it was a pleasing pallet. Pastel orange, pink, green, blue, and purple matched the aesthetic but were sometimes hard to discern between (particularly the blue and purple). We can only imagine if someone had color blindness!

Second, the instruction manual has plenty of examples, yet it was hard to read at times. It took several readings to understand the concept of movement through Periodic Trends (including regaining Energy), and the font and layout were slightly confusing.

Unlike previous games, Periodic might have a steeper learning curve (even though the complexity is similar) and be intimidating to newer players. A more direct explanation of the end-game goals early on, plus a better layout, might have made it easier to understand.

Finally, although the game is fun regardless of player levels, it shines at three or four players. At two players, it tends to become a mindless back-and-forth (with little interaction). Five players become very busy, making it hard to complete Goals (and meet Agendas) before the game ends. 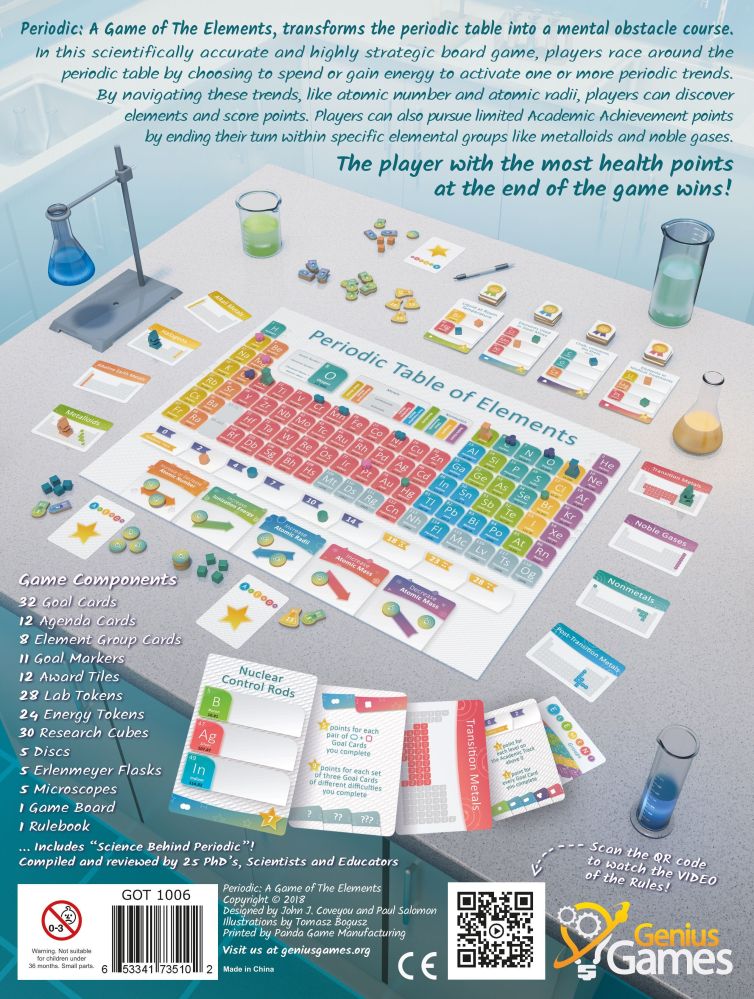 Despite these criticisms, this is probably my second favorite game design from Coveyou (after Cytosis) and my favorite theme. I’ve always loved the periodic table and elements, so playing around on it added to the experience.

As with all of Genius Games products, there’s an essential educational element. As you play Periodic, you become more familiar with the elements, their atomic numbers, their groups, and how they’re related to real-life materials or processes.

Periodic is an excellent educational theme on top of a fun movement and collection game.

We give Periodic a massive 4 periodic trends out 5.

1 Comment on Tabletop Tuesday – Periodic: A Game of the Elements