(This Tabletop Tuesday we’re giving you a two-for-one! Here’s another game for you to enjoy this Tabletop TWOsday!)

Microgames – a game that consists of minimal parts, size, and cost, but still allows plenty of fun or strategy.

These games aren’t exactly new; we’ve had microgames since the ’70s, including the Micro Warfare Series and Ogre, two miniature wargames. The gaming renaissance of that era was perfect for companies to capitalize on the concept.

Today you’ll find a variety of microgames, from travel games like Mint Works to the products of Button Shy ‘Wallet Games’. Looney Labs is known for its portable deck-based games, but they’ve now joined the rest with their microgame Are You a Robot? 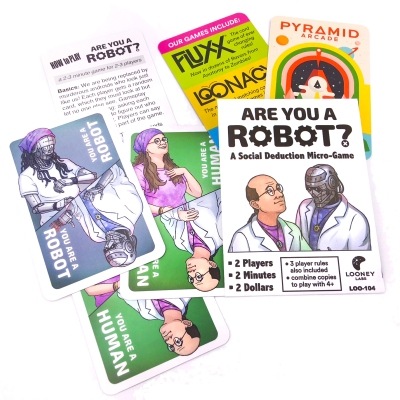 This game is genuinely a “microgame” consisting of a mere three cards and intended for two or three players. Two cards say “You Are a Human” and one card says “You Are a Robot,” and that’s it.

The point of the game is one of social deduction, as the cards are handed out randomly to each player. Can you figure out who the Robot is (if there is one)? Or do you accidentally do the Robot’s job and kill your fellow Human?

As a social deduction game, there is no right or wrong way to play this game. You can ask any question you want, and the other players can respond with the truth, lies, or anything between; the whole point is to deduce which player is the Robot.

Maybe you use logic to figure out who is most likely to be the Robot? Perhaps you read everybody’s body language? Or do you give in and trust when another person claims they’re a Human?

The main game works best for three players (two Humans and one Robot); it ends when one Human “zaps” another player. If the eliminated player was a Robot, the Humans win; if it turns out they were the other Human, the Robot wins.

In the two-player version, there’s a possibility nobody is the Robot, as two of the three cards are randomly drawn. The game ends when someone shoots or both parties agree to shake hands; like before, if the Human makes a mistake (shooting the other Human or shaking hands with the Robot), they lose.

Are You a Robot? also has the capacity for different modes and more players by purchasing multiple sets.

Schrödinger mode consists of Human card per player and a single Robot card, all randomly dealt so  nobody knows if anyone the Robot is there. It incorporates the handshake mechanic of the two-player version, meaning the Robot might still win if any Humans decide to be trusting.

Extended mode involves several packs of cards and more complex rules; if a Human shoots another Human, the murderer is removed from the game, the victim is revived, and then the deck is redealt. Each time this happens, more Robots are added to the mix, leaving the Humans slowly being replaced unless they find them all or trust the remaining people. 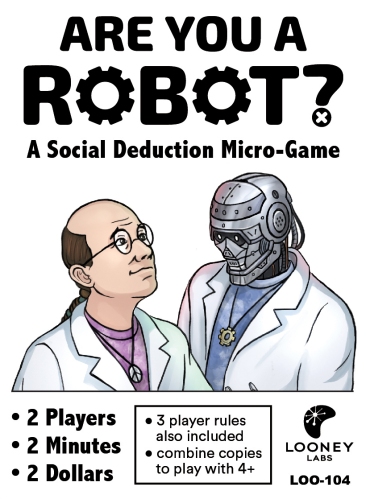 Are You a Robot? may not be for everyone, given its nature as a microgame of social deduction, rather than the typical board or strategy games you find on shelves. For what it does, though, it’s a lot of fun, from small groups of friends to parties.

The price tag is well worth it as well, costing only $2.00 per pack. Even if you wanted to include a large party of a dozen people, you’d only need to spend $12.00 for everyone to participate and have fun.

The cost, portability, and simplicity make this a worthwhile investment for anyone who likes party and deduction games.

I give Are You a Robot? a suspicious 4 handshakes out of 5.

(Thank you to Looney Labs Games for allowing us to preview their game!)