Cthulhu-themed tabletop games have been popular for years, from Arkham Horror to Mansions of Madness. You can’t check a gaming shelf without running into something based on H.P. Lovecraft’s work, even if it’s only a Munchkin or Gloom variant.

Aside from the multitude of zombie-based games, there are no other horror genres that saturate tabletop gaming. Unlike The Walking Dead and its ilk, though, Lovecraft’s literature has enough variety that the games tend to vary more.

When Dynamite Entertainment and Lynnvander Inc. put together a game based on H.P. Lovecraft’s ReAnimator, as well as Dynamite’s own comic, I knew I had to try it — regardless of Cthulhu overload. The short story was always a favorite and I’d long been a fan of the cult films and comics based on it.

What I found was just the right ReAnimator formula, but unfortunately with the dangerous flaws that Dr. Herbert West often overlooked. 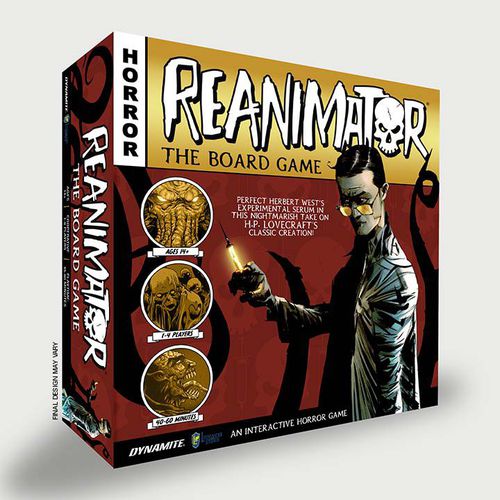 ReAnimator: the Board Game is a story-driven game wherein you attempt to create your version of Dr. West’s tale through random cards and some strategy. Players cooperate in the guise of Dr. West’s assistant, dealing with the pitfalls of his experimentation in the hopes of perfecting the reanimation recipe.

Each game lasts six Serials, during which players handle encounters, take actions, and experiment with the formula. Serials are further broken down into player turns, which contain one Subplot as well as an action phase.

The goal of the game is to successfully experiment with the formula during each Serial, which requires gathering the Cadavers, Ingredients, and possibly occult Tomes. Unfortunately, Dr. West faces obstacles in the form of Subplots, the City Watch, any Undead he accidentally creates, and his bad luck.

Should Dr. West’s Health or Sanity ever drop to zero, he dies or goes insane, and the game is lost. Given he may lose either of those tokens to everything from Subplots to failed dice rolls, ReAnimator becomes a task in finding resources and keeping Dr. West alive. 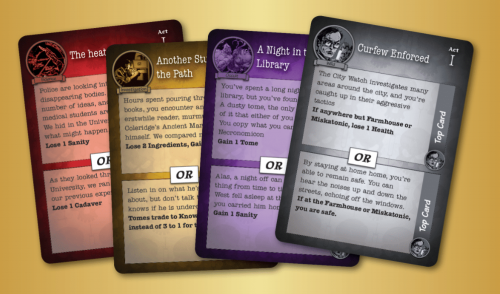 A turn in ReAnimator starts with one player becoming the Narrator, the person who creates the Subplot by reading cards from the Act decks. There are three Act decks drawn in order (I, II, and III) and each Act card may have multiple choices or instructions.

Each Narrator draws a card from the first Act, reads the text, and enacts the consequences. If given a choice, the group decides which route to choose; this not only affects results but may also change the next Act.

Act cards are color coordinated for their type of encounter: brown for Investigation, red for Science, purple for Occult, and grey for Wild. When picking a card’s text, the choice may also inform you what the next card will be; this designation may affect the group’s decision, as some card types have harsher consequences than others.

Once the Subplot is resolved through all three Acts, the players each take a turn to move Dr. West to different buildings. Each building provides a different benefit, whether it’s gathering Ingredients at the infamous farmhouse, digging up Cadavers at the cemetery, or taking a moment to rest at the university to regain Health and Sanity. 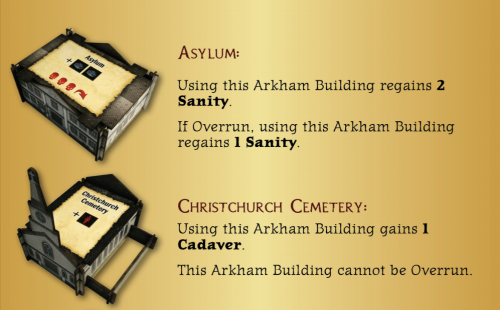 The game continues in this fashion, with each player Narrating a single Subplot followed by each player taking action with Dr. West. Once everyone has had a turn as Narrator, it’s time to finish the Serial with an experiment.

Players expend a number of Ingredients to determine the target they’re attempting to roll under to succeed. They also must spend one Cadaver even to try the roll; if Dr. West has no Cadavers at this time, his goal fails, and everyone loses.

Whoever is making the roll is initially given one die per player; given most Serials end with only a few Ingredients, the chances of four dice rolling under those numbers is nearly impossible. That’s where Tomes are useful, as they remove dice from the pool; in a four-player game, having three Tomes reduces you to a more manageable one die.

If the players succeed, their formula is a step closer toward perfection, and they continue to the next Serial unhindered. A failed die roll, however, can have dire consequences, as Dr. West loses Health and Sanity – the story might continue but the worse the failure, the higher the likelihood Dr. West is lost.

One change to this sequence is during the sixth, and final, Serial when Dr. West uses his formula for the last time. At the end of the sixth Subplot and actions, the group either succeeds or loses the game; this is the climax of the story when Herbert proves whether his formula works or faces the horrific consequences of his experimentation. 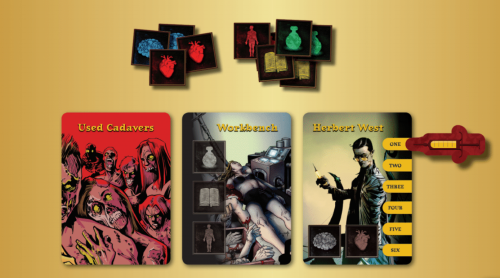 ReAnimator is a challenging game, with a lot of resource management and devastating RNG, possibly even more than Thanos Rising. The random Act cards can strip you of vital resources or harm Dr. West, and the wrong ones in a row can end the game before you’ve made it past the first Serial.

Worse, as the game progresses, the difficulty curve increases, with Undead blocking access to buildings or overrunning them entirely. You may find gathering resources or avoiding harm all but impossible as you approach the sixth Serial.

This difficulty doesn’t make ReAnimator a lousy game by any stretch of the imagination. However, it does affect the style of play and enjoyability. Casual players may struggle and give up; more experienced players need a good strategy and no small amount of adaptability.

Like a Lovecraftian story, the route to winning is never easy, and there’s very little in the way of hope or good luck. 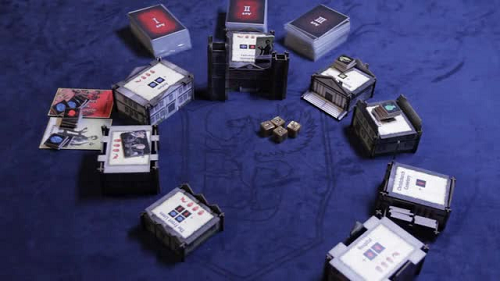 My biggest critique is that the single-player mode is too hard. Unlike other games, where difficulty scales with participants, ReAnimator works best with more players.

You may face more Subplots per player, but you also receive exponentially more actions per Serial; a four-player game throws 12 Act cards at you but also provides 16 Actions before you experiment. A one-player game hits you with three Act cards and a single Action to gather resources; you rarely have the Cadaver or Ingredients necessary, unless you were lucky, and the Subplot gave them to you.

ReAnimator lists itself as a “1-4 player” game but doesn’t provide any changes in rules for solo players, that means the single-player version is virtually unplayable. We ended up house-ruling that a solo player treated the game like they were two players, facing two Subplots but receiving two actions after each.

With my love of single-player games, that the publishers would advertise a solo play when there really isn’t one (not without homemade rules) is disappointing. 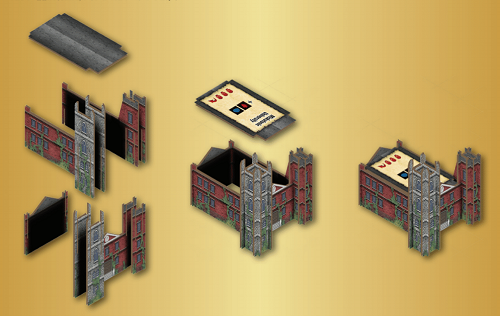 A smaller complaint is the “board” itself, which consists of 3-D cardboard buildings placed in the middle of the table. There is no board, and the buildings just sit there, in whatever configuration works for your group.

Unfortunately, the buildings aren’t designed to stay together; although they’re sturdy when left alone (or with tokens placed atop them), they quickly fall apart if lifted, knocked over, etc. The creators presumably didn’t mean for them to be permanent, and in fact, the roofs are intended to be changed during the game.

This design means you must construct (and deconstruct) them every game; great for storing but horrible for setting up and taking down. Not to mention, this game is best played away from the elements (or spillables) and on a table that won’t be disturbed.

Although the 3-D buildings are neat, I think ReAnimator might have done perfectly fine with a 2-D board. Some players have even suggested just using the roofs, as these are the only things required and that show rules on them.

One last gripe: the storage insert on the box is not designed for any of the parts: it doesn’t fit the buildings, the cards, the tokens, or dice. While the game itself was put through some design and playtesting, I don’t think the components or the box were given much thought. 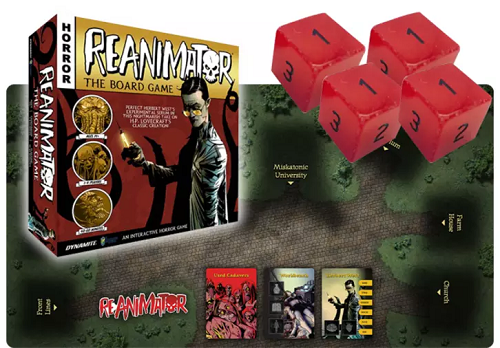 Is ReAnimator a worthwhile game? For some players, especially those who love Lovecraft, the Herbert West films, or the comics, this is perfect. Like Scott Pilgrim’s PLCG, this game may appeal to fans more than the general tabletop community.

More casual players, or those who don’t like hard games, may not enjoy this one as much. Also, although advertised as a solo game, it’s practically unplayable as written; single-players will need to house-rule if they want any chance of beating the game.

Overall, ReAnimator does a decent job of reimagining Dr. West’s story; bleak, horrific, and challenging, the players will have an interesting experience. Unfortunately, the high difficulty, questionable components, and lousy storage mean this game might not last long on shelves.

I give ReAnimator: the Board Game a mind-wrenching 3 cadavers out of 5.