On February 25, 1964, Malcolm X, Cassius Clay, Jim Brown, and Sam Cooke met up in a hotel room in Miami. This is a true story, though none of the men have spoken about this evening. One Night in Miami is a fictionalized version of this event based on the stage play by Kemp Powers. In Powers’ vision Malcolm brings Clay, Brown and Cooke together to discuss how they can use their successes and platforms to advance civil rights in the U.S. With Powers adapting the screenplay and Regina King making her directorial debut, the material translated masterfully! King’s vision for this project is magnificent, from setting up who each character is in that time, to the look and feel of the locations, to the intensity of the conversations. I was left feeling like I was a fly on the wall following these four men around in that room and peeking into their lives. 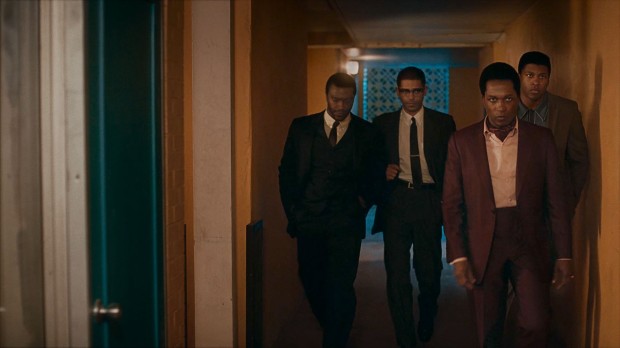 That feeling can only be attributed to the stellar performances by Kingsley Ben-Adir, Eli Goree, Aldis Hodge, and Leslie Odom, Jr. Each one of them should be on all the ballots this awards season. The movie starts as three of the members of the group wrestle with the conflict between their great successes and the overt racism of the society they live in. The men come together after Clay wins his fight against Sonny Liston. While Clay, Brown and Cooke were expecting a raucous night out, what they got was a series of conversations about their place in the world. From Kemp’s point of view, these men are more than acquaintances. They are friends, the type that challenge your beliefs and push you with support and accountability. They laughed, they argued, but they did not fight.

There are few films where black men are portrayed as strong, honorable friends without being involved in a criminal matter. I was left wondering what was said that evening and how each of them were changed. The film is all the more heart breaking knowing that within a year two of the men would be killed.  If I had one objection it was that, in the end cards, they mention Malcolm’s killing but not Sam’s.

Released on Amazon on January 15, 2021, One Night in Miami should go down as one of the best films of the year!