We speak with the amazing Ken Hall about improv, diversity and The Umbrella Academy!

Recently, I had the distinct pleasure to speak with actor & comedian Ken Hall, who provided the motion capture and physicality for the character of Pogo on Netflix’s The Umbrella Academy. With season 2 having recently dropped on Netflix, we at PCU were thrilled for this opportunity.

**NOTE** This interview will contain mild spoilers for season one of The Umbrella Academy.

PCU: Thank you very much for taking the time to talk with us, Mr. Hall. We here at PCU are huge fans of The Umbrella Academy (both the show and the comics), and I personally love the character of Pogo. We’re really excited for the premiere of season 2.

For those who might not know you as well as we do, please tell our readers about yourself.

KH:  My name is Ken Hall and I’m a Canadian based actor/comedian in Toronto.  I’m a Canadian Comedy Award Winner (Best Breakout Artist) and multiple CCA nominee.  I perform in a comedy (clownprov) duo called 2-MAN NO-SHOW with my comedy partner-in-arms Isaac Kessler and we’ve been performing together as a duo for over 11 years and have toured all over the place.  I teach a bunch here in Toronto at all the improv theatres i.e. Second City, Bad Dog Theatre, The Assembly and The Social Capital Theatre.

PCU: You’ve worked with and taught at Second City in Toronto. How did you get started with them?

KH:  I first started with Second City 16 plus years ago as a student in their training centre.  I started right at the beginning in a Level A improv class and simply never stopped.  Just loved everything about improv i.e. connection, comedy, playing pretend and giving and receiving laughs.  I then auditioned for their Conservatory Program (a one year commitment working with an ensemble to put on a revue style show) on the Mainstage.  It was also where I met Isaac.  A few years later I had a chance to start teaching clinics there and discovered I loved teaching just as much as I love performing.  It’s a joy to help adults learn how to play again.  I now teach my own public speaking classes and a clown class I brought there. Two huge passions for me.

PCU: I got a chance to watch some of your 2-MAN NO-SHOW performances as well, and got a serious laugh out of those performances. What drew you to improv comedy and how did you get started with Isaac Kessler?

KH: We thank you for watching and laughing with us!  I was a huge fan of Who’s Line is it Anyway? That was my first exposure to improv.  It was miraculous – watching how the cast created instant humour and connection in a matter of seconds.  I’ve always loved comedy and thankfully had been given a somewhat innate sense for comedy.  But growing up I was far too shy and scared to put myself out there.  But in my late 20’s I made a bunch of life changes and that was one of them that really started me living.  Doing improv classes helped me become the best version of me.  I found myself by playing other people if that makes sense.  It’s invaluable training to become a better person in addition to the theatrical skills you learn as well.  I think the rules of improv i.e. ‘Yes Anding’ and being supportive and open are good ways to live a happy life.  It changed my life and for the first time showed me that I was meant to be here.  And that performing and making others laugh is a way of helping people.  And that’s something that brings me deep meaning and helps me.

KH: Great question!  Unfortunately, it’s like people that look outside of the norm often don’t make it to our screens or stages.  Or if they do they are often viewed only through the lens of what makes them different, be it a physical disability or stature.  Often the biggest hurdles I’ve experienced is to prove to people on set that I can act and bring depth and nuance to the characters I play.  In some ways people have looked at my height (I’m 4 foot 7 and 3/4’s) and see only that aspect of me rather than the multitude of perspectives and points of view I have.  The biggest leap forward I think currently happening.  With the widespread call for action for Black Lives Matter change is happening in our cities and on our stages and screens.  BIPOC and LGTBQ+ have been left out and underrepresented for such a long time.  I think that because everyone is having these profound conversations, real lasting change can happen and within that, a larger conversation of equality is taking shape.  I’m curious and hopeful to see what the industry will be like in 5 years and how we all shine brighter when marginalized voices are heard.  We entertain audiences but I also feel we educate audiences too.  And we need to have people that have physical disabilities and such to have a seat at the table. And that starts by making training accessible and doing outreach to help bring people with disabilities into acting classes, improv classes, theaters, writer’s rooms, directors, etc.

PCU: How do you feel that filmmakers & others in the industry could be allies and advocates for those of us with physical differences?

KH: As I mentioned, I think it’s crucial that in order to see change we have to seek it.  Meaning that filmmakers, writers, producers, casting directors, agents, teachers, etc, proactively engage and seek to bring more people with disabilities into the industry.  I’m curious about what shows could look like in the future, what new and exciting characters and stories can happen and be told.  For me I think it makes good business sense as well to invest in talent that can share stories we have yet to hear that go well beyond surface appearances.

PCU: Tell us a bit about what it was like to work on season 1 of The Umbrella Academy, and what your favorite parts were.

KH: Just amazing!  I am grateful to play Pogo as well as Herb. It was the first time I’d worked with MOCAP and really enjoyed taking on the characteristics of an elderly chimpanzee.  Sometimes my favorite experiences were the ones where I would just go exploring in the soundstage and taking in all the amazing sets.  The academy for one always blew me away.  The set design is truly out of this world.  It was like visiting a museum and there would be new things that I didn’t notice the last time.  So much detail on such a grand scale.  And that’s the show in a nutshell for me.  It’s massive!  And it’s so cool to see all the small bits and pieces that all combine to pull this show off.  It’s really a team effort and I’m taking cast, crew, production etc.  It’s really quite remarkable what we’ve been able to achieve and I’m thrilled fans really love it. 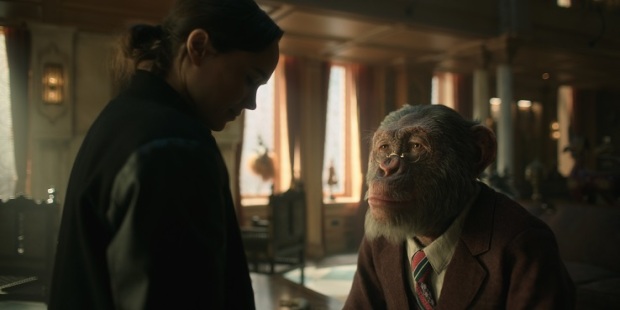 PCU: With Pogo sadly having met his end at the hands of Vanya in season 1, what will you be working on next?

KH: Yes, that was a sad moment.  I remember reading the graphic novel before shooting began and coming to that part where Pogo is no more and I was like “I wonder if he somehow makes it” but then kept reading and realized there was no way Pogo could come back from that.  The graphic novel is in fact, quite graphic in that sense.  But if you’re going to go then I’m glad Pogo went out the way he did.  As for me…I still have Herb who is diligently working away at The Commission.

PCU: For those who haven’t yet seen it, can you give us any hints about what’s going to happen with season 2 of The Umbrella Academy?

PCU: Thank you, Mr. Hall, for taking the time to answer all of our questions. It’s been a pleasure, and we wish you nothing but success in the future.

KH: Thanks for the chance to talk with you Doug!  Really enjoyed the questions.

If you want to know more about Ken Hall, you can check out his website and follow him on Twitter. Season 2 of The Umbrella Academy premiered on Netflix on July 31.