A Column to Help Save White People from Ourselves

I was what we used to consider racist-neutral. Like in D&D, my alignment would be neutral good. There is no neutral anymore. I gotta get lawful. Because being chaotically good isn’t an option. Is it really good if it’s only good chaotically? We used to think that the opposite of good was bad. It’s not. The opposite of good is neutral. Neutral is a luxury born of privilege.

It’s not exactly laughable, but it is telling that I am the most “woke” person most of my family and friends know. Guess what? I am racist AF. I’m also antiracist AF. I’ve been listening to a lot of Ibram X. Kendi talks lately. He’s the historian/professor who wrote How to Be an Antiracist and Stamped From the Beginning and has been integral to the global discussion on racial justice. Dr. Kendi suggests that racist is more like an adverb than a noun. You can do something racist in one moment and something antiracist in the next. I conceptualize antiracism like Buddhist enlightenment: a momentary state that one may achieve and lose thousands of times, but which one strives for all the time. 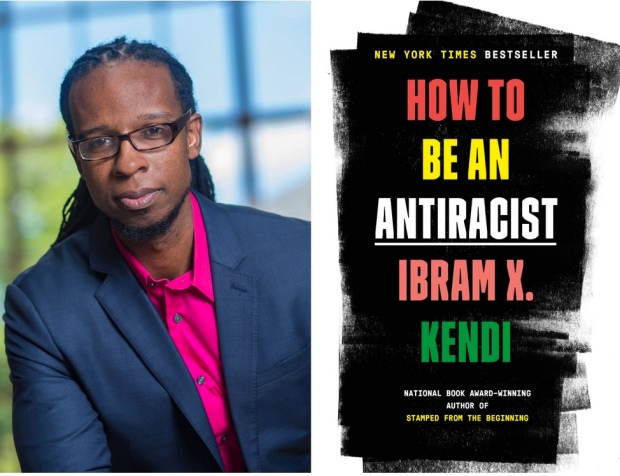 In this series, I will tell you – presumably white folks who are already striving to become more antiracist – about the media and culture I’m consuming to try to become better at understanding the black experience. I figure I’ve been trained to be racist since birth by living in a culture that has repeatedly witnessed black people being abused and murdered, yet somehow let that be business as usual. By deliberately devoting a portion of each day to view or listen to the work of not only activists and scholars like Dr. Kendi, Black Lives Matter, or Michelle Alexander, but also black artists like playwright Caleen Sinnette Jennings, musician Boots Riley, and painter Mickalene Thomas, I can help counteract my racist conditioning. I can share my journey and expose you to some things you may not be aware of.

Is this performative antiracism? Probably, to some degree. But that’s not my conscious motivation for doing this. It’s a way to maybe help other well-meaning white folks who are trying to navigate a tricky time in history, while keeping myself accountable to continuing the work. I feel shame that I have watched numerous black men be literally murdered by agents of the state while begging for their lives on camera. Numerous. How did I go from outrage to “oh, it’s recycling day?” How did I do that numerous times?

Lesson One: this is my white privilege. I personally do not have the constant and underlying awareness that at any moment, even asleep in my own home, I could be killed by the police and my death would be a blip, if anything. The atrocity du jour, the cost of living in the land of the free. Freedom being something my not-distant forebears had to be “granted” – by a narrow two-thirds majority, mind you – instead of being, you know, born with it. Freedom being something that I truly possess on paper alone. The reality of people of color is not my day in, day out, so I forget. I can do better and so can you. So let’s, shall we?

Killer Mike recommended this on Late Night with Stephen Colbert as a good 101-level place to start and wow, was he right. The Angry Eye is a 2001 documentary depicting a Blue-Eyes/Brown-Eyes workshop held by world-renowned educator and diversity trainer, Jane Elliott. Elliott first developed the Blue-Eyes/Brown-Eyes exercise in 1968, when she was a third grade teacher, in reaction to the assassination of Martin Luther King, Jr.

As described in its promotional materials for diversity trainers:

The Angry Eye is a documentary film in which Elliott revises her original experiment with a group of young adults in place of third grade students. The film captures what happens during her diversity training session and how the participants respond to being judged and criticized for their eye color. At the same time, the documentary weaves in interviews from people who have been a part of Elliott’s trainings in the past. By the end of the video, viewers will have a new perspective on the issue of racism and other forms of discrimination.”

The 50 minutes I spent watching this were eye-opening and made me aware of my privilege in a very visceral way, particularly the sequence from minutes 20-34. If you don’t make the time to watch this whole film, (1) work on your stamina, please, we’ve got a lot of ground to cover and (2) watch these 14 minutes. Herein, two white college students teach important lessons by example in how they react to badgering by Elliott. Both have been assigned to the Blue group for having blue eyes; both have been subject to rude treatment by Elliott.

Student One: Elliott embarrassed the first young woman in front of the class for failing to bring a pen and paper, though students weren’t explicitly instructed to bring them. The student became very upset, eventually crying, but remained articulate and answered Elliott’s questions about how the encounter was making her feel. It demonstrated how children of color, or people who are different for whatever reason, can be made to feel stupid and attacked for tiny errors or non-infractions yet are still expected to behave respectfully to the adults who are picking on them. The young woman’s candid responses were important: she was angry, she was trying to keep her cool, she was trying not to look at Elliott as to not provoke her or get more upset, it was exhausting to stay calm and not engage. The connections that Elliott drew from these responses seem so obvious now I wonder how I’ve never noticed them: years of this type of treatment or the reasonable fear of this type of treatment has a physical, a medical toll. Ulcers, high blood pressure, heart disease. Even the illness of substance addiction makes sense in the face of persistent and lifelong discrimination.

Student Two: The second young woman’s reaction was even more instructive and hammered home my own privilege. This woman was so strongly attached to the righteousness of her position, arguing that Elliott was being unfair to the Blue group, that she eventually stormed out of the seminar. It should be noted that the seminar was a voluntary, 2.5 hour exercise for which students received an hour of college credit. Also, Elliott by this point had been pretty explicit that the blue group was not going to be treated fairly. Two had just witnessed what happened to One and was similarly publicly humiliated, but in her case for lying. After a bit, the student tried to return to the seminar, but Elliott would not permit her until she had apologized to all the people in the room – particularly the people of color – because she had exercised a privilege by leaving that zero people of color enjoy. When you’re black, you never get to leave the room or the building or the town or the state or the region for relief from racism. You know that you are likely to face the same treatment you are trying to escape on the other side of the door or the county line. The student chose her privilege and left the seminar completely rather than apologizing and learning the lesson.

Her decision motivates me to stick with this work daily. My ability to walk away from this fight is not a privilege I choose to indulge in anymore.

Patricia Mitchell has been an editor, an attorney, a theatre reviewer, a Girl Scout leader and a promoter for punk bands. She is currently a freelance writer based in Baltimore, Maryland. Learn more at www.patricia-mitchell.com.
Follow Pop Culture Uncovered on WordPress.com