Whatever gets us more Jo Martin is fine by us!

((WARNING: The following contains spoilers from the episode “Fugitive of the Judoon,” which aired on Sunday, January 6th, 2020. If you haven’t reached that point in Doctor Who, stop reading now!))

How many Doctors have there been so far? That’s been the question ever since “Fugitive of Judoon,” the fifth episode of the (supposed) Thirteenth incarnation’s second season.

Although we, the audience, have had new Doctor’s and used-up regenerations introduced, this is the first time the Doctor themself is clueless. Where, in all of this Time Lord’s history, could Martin’s version be from, and why do neither version remember?

A theory from one fan may prove to be the most solid one yet, although it takes some knowledge of the original series (1963-1989), as well as purported plans for a season cut short.

Jimmy Meritt, RPG author (and Doctor Who fan), gave us permission to discuss his theory that puts Jo Martin’s Doctor between the Second and Third incarnations. This concept starts with the fact that we never see Patrick Troughton regenerate into Jon Pertwee, but there’s more information that backs this concept up.

For those unfamiliar with the older episodes, in “The War Games,” the Second Doctor defeats another renegade Time Lord (The War Chief) by calling in the Time Lords. Unfortunately, as a fugitive himself who left Gallifrey long ago, the Doctor faces punishment as well, in the form of exile to Earth and a “change of appearance.”

The last we see of Troughton’s Doctor is a series of psychedelic effects as he’s sent into a “void” of sorts. No regeneration is shown, and the episode ends; Pertwee’s first episode, “Spearhead from Space” (shot in color and broadcast over 6 months after “The War Games”) opens with the Third Doctor stumbling from the TARDIS onto Earth.

The question, Mr. Merritt asks is, “What could have happened between those two points in the Doctor’s history?” Thanks to some ‘official’ (albeit archived) posts on BBC’s website, we may have not only an answer but also an explanation for where Martin’s incarnation fits.

The Doctor Who episode guide reveals showrunners had plans for the Second Doctor after his apparent disappearance in “The War Games,” and it wasn’t regeneration. Instead, the Doctor was to become a tool of the Celestial Intervention Agency (CIA), a secretive Gallifreyan organization that believed in interfering with history to maintain its constant.

This mysterious “Season 6B“, where the Doctor worked for the Time Lord’s CIA, ends in a conflict and the Doctor becoming a fugitive again. A summary of the BBC’s official position explains the premise that has not been removed from canon (yet).

Rather than undergoing the regeneration shown starting at the end of The War Games, the Second Doctor was recruited to work for the Celestial Intervention Agency, a clandestine Time Lord organization shown to exist in “The Deadly Assassin”. During this time, the Second Doctor regained Jamie and Victoria as companions, acquired a Stattenheim remote control device to summon his TARDIS and undertook an unknown number of missions, including that depicted in “The Two Doctors.” Eventually, the Doctor’s association with the CIA ended for reasons not known and his full “War Games” sentence was executed at the beginning of “Spearhead from Space.”

The episode guide provides a compelling argument that these events occurred, even if never seen. The discussion points to the Second Doctor’s change in age, experience, and control over the TARDIS, as seen in “The Five Doctors” and “The Two Doctors,” to suggest that that incarnation has been around long after “The War Games.”

If the Second Doctor was working for the CIA, but then broke from them, this is where Martin’s incarnation might come into being. Mr. Merrit’s theory follows:

When we see Jo Martin’s Doctor, she is in hiding on Earth and being pursued by the Time Lords. She and the Time Lords chasing her express that she went on the run because she is being forced to do work she does not like or has a moral problem with.-

I propose Troughton’s Second Doctor escapes the Celestial Intervention Agency, regenerates into Jo Martin’s Doctor to hide, and eventually, Jo Martin’s Doctor is caught by the Time Lords and forced to finally have the consequence of exile to Earth and a new regeneration.-

-Jo Martin regenerates into Pertwee, and when the Time Lords remove his memory of how to operate the TARDIS, they also remove the memories of the Jo Martin incarnation, so he forgets whatever questionable act made him flee CIA work.

Mr. Meritt goes on to even suggest there’s a hint in recent episodes to these events. During “Spyfall,” the Master claimed to know a secret about the Doctor; could this secret involve the CIA and the Second Doctor regenerating into Martin’s incarnation and going on the run? 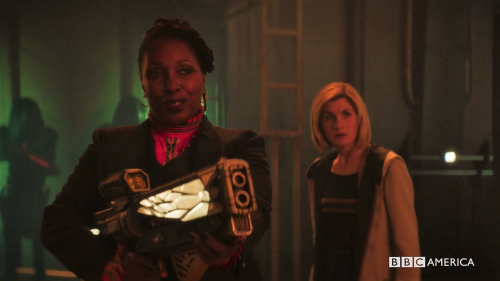 Whether this theory is correct is yet to be seen, but as a fan of classic Doctor Who, Mr. Meritt presents one of my favorite (and most solid) suggestions.

The tie to the original show, including episodes that never occurred (but have been alluded to and considered canon), would be fantastic writing and continuity. If true, these happenings would also explain the significant difference in personality and ideology between Martin’s incarnation and the other Doctors (similar to the War Doctor).

After all, if you’ve been forced to perform unknown acts as a tool of a secretive Time Lord spy agency, you would have a little less aversion to “questionable” tactics.

Either way, this season has us hooked, and we can’t wait to find out more about Martin’s Doctor and how she fits into the larger picture. Who knows – maybe we’ll get a spin-off series dedicated to her adventures!

1 Comment on TV Brew: The Doctor and Their Incarnations – A Jo Martin Theory