We had such high hopes…

White Wolf. The Butcher of Blaviken. Geralt of Rivia. These monikers have been given to one of my personal favorite characters in literature and videogames. Gamers and readers alike have been waiting for this show since production of Netflix’s The Witcher was talked about back in 2017. So, I was understandably excited when I heard that old Mr. Gruff-Pants would be gracing our television screens in a live-action adaptation of the novels by Andrez Sapkowski and the amazing videogames (most recently by CD Projekt Red).

“Was”, being the operative word here.

Out of a combination of professional obligation, my love of the franchise, and pure curiosity, I sat through a few episodes of this series’ first season. I finally had to cut it off after episode 4, however, when The Witcher just seemed to discard any semblance of good plot and cogent writing. Flashbacks were never outlined as flashbacks, one main character talked to a dead infant, an assassin used a giant bug to carry out his mission, and (I can’t believe I’m writing this) there’s just too much gratuitous boob. Yep: topless women abound in the first few episodes of this show, and the nudity doesn’t really add anything to it. It’s just there.

There are, of course, some other things about this show that, as a fan of the games, kind of irked me. For example: how do you get Geralt’s wolf head pendant wrong?? It’s a hallmark image in the game series, and warns him of the presence of the monsters he’s hunting! The pendant that lead actor Henry Cavill wears in the show looks like someone realized at the last minute that they needed it, and just did a Google search for “wolf head necklace”. It’s just wrong. 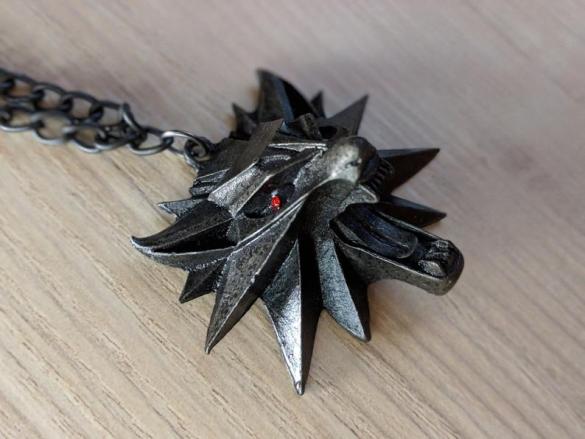 THIS is what it should look like. Less than $9 on Etsy, folks…

Okay, so let’s talk about Mr. Cavill. First, I know that he’s English, and his normal speaking voice is with an English accent. However, the affectation he puts on to portray Geralt of Rivia just makes him sound like Batman trying to speak with an accent. C’MON….

It’s not all terrible, however. The Witcher does have some good points to this otherwise disappointing piece of streaming cinema. First off, I have to give serious credit to the young actresses portraying Princess Ciri and Yennefer of Vengerberg (Freya Allan & Anya Chalotra, respectively). They are the absolute best part of The Witcher. Their talent shows through in every scene with the delivery of their lines and every subtle movement they do. Miss Allan draws the viewer into her scenes by deftly portraying the pain that Ciri is subjected to following traumatic events in the castle, while Miss Chalotra shows off an emotional side to Yennefer that we rarely get to see in the games. Nothing is wasted with these two, and I truly hope they go far in their careers.

Also, I want to ensure that the fight choreographer gets a shout-out. The brutality, speed, and elegance of the swordplay in this series is a treat to watch, and very reminiscent of the games. I was especially pleased to see that Geralt’s sword style, while flowing and beautiful (as combat goes), was very deliberate & visceral in its level of violence and power. Watching the White Wolf slice his way through a banquet hall of armed guards & guests made the rest of this show a bit more palateable.

Finally, I would be remiss if I didn’t mention the sets and the cinematography. It feels like this is where the vast majority of the talent in this project went. The colors, the level of detail, and the camera work all played together to at least make The Witcher look amazing. You can pause the show just about anywhere in any episode, and be treated to a visual delight of the grimy streets of a slum, the cold walls of a castle, or the sun-dappled clearings in a magical forest. It really is a very pretty show.

All in all, this was a disappointing effort by creator Lauren Schmidt & lead Henry Cavill. I went into this with hope that someone could do good things for video game cinema – especially given the amazing writing of the novels by Andrez Sapkowski. Alas, those hopes were crushed. I may end up finishing this show eventually, but I’m not in a hurry to binge-watch it.

If you want a true-to-the-source-material version of The Witcher, there’s always 2015’s short film, The Witcher 3: Wild Hunt – A Night to Remember.