School season has started, and many parents are probably more focused on homework, clubs, and PTA meetings than “luxury activities.” Even if summer is over, however, that doesn’t mean we should stop having fun with our kids.

One meaningful way to bond (and learn) with your children is through tabletop gaming. Studies have shown that tabletop gaming helps build cognitive and social skills, as well as positive family relationships.

This Tabletop Tuesday I want to go through three age categories and discuss my favorite children’s games from the 2010 decade. Maybe you’ll see some you’re familiar with, or perhaps you’ll find something new.

Either way, I hope you’ll find a great way to bond with your children and help them grow.

A simplified version of the word association game, Concept, this version is cooperative and doesn’t require any reading skills. Instead, players work together to find as many animals that fit a specific trait shown visually on the board (e.g., number of legs, habitat, diet, etc.).

Concept Kids: Animals is excellent because of its visual style, allowing younger children to make matches solely on your words and the picture. It also proves an educational opportunity to teach them the differences in many animals. 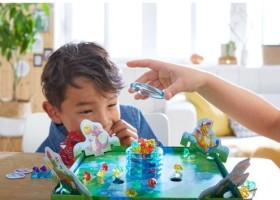 One of many HABA games my children own, Dragon’s Breath is a combination of prediction and set collection. Players lift rings from a stack that’s holding different colored gems, and as they fall they try to collect the color they picked that round.

Dragon’s Breath helps kids learn to analyze and make guesses, as they have to pick what color gems they think will fall that round. Although competitive, it’s not aggressive, and the randomness allows all players to win a game usually.

Although I’ve warned about franchise games in the past, and others based on the Disney show have failed, Protect the Pride Lands has proven an exception. Players work together as the Lion Guard, trying to stop the “outlanders” from invading while making sure Kion reaches Pride Rock first.

As with many Disney games, the design is excellent, with miniatures that kids love. That doesn’t detract from the gameplay, as players must learn strategy and patience, as they decide which Lion Guard members to move each round.

Sometimes a good gaming night isn’t about competition or beating others but solving a mystery. In Outfoxed!, players work together to solve the mystery of who took Mrs. Plumpert’s pot pie, collecting clues and evidence before the villain escapes.

Outfoxed! is perfect for helping kids learn teamwork and deduction while working against the clock. Kids also love the design of it, from the miniature fox to the “decoder” that lets you scan for evidence.

The ICECOOL series involves flicking weighted, wobbly penguin figurines around the board. Players take turns as a “hall monitor,” trying to catch the other students before they can grab fish through the doors and hallways.

These games have a lot of modular replayability, a fun theme, and some cool physics. We recommend getting both the original and the expansion, as ICECOOL2 adds new layouts and modes, room for more players, and can be used as its own game. 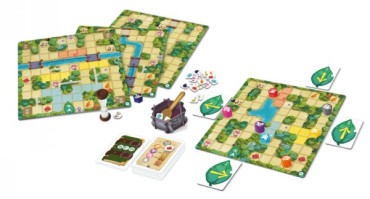 Another simplified version of a game for older audiences, Magic Maze Kids is a great intro game for elementary aged-kids. Players work together, controlling heroes as they explore (and escape) before the timer runs out.

Magic Maze Kids is great because the entire thing works as a growing tutorial, adding new rules as players grasp the old ones. I also love how it teaches teamwork and requires quick-thinking, pushing children to come together while beating the timer.

Rhino Hero (another HABA game) is possibly one of the biggest hits on the scene. Players take turns stacking cards and building a tower, trying to play their last card, but the Rhino Hero (and other rules) can make everything fall.

Rhino Hero can be pretty competitive for a kids game, as you force your opponent to make bad plays, but it’s also a lot of fun. It can also be mixed with the sequel, Rhino Hero: Super Battle, which adds more rules and players.

If we’re introducing kids to tabletop gaming, they’ll inevitably meet “legacy games,” board games that are used once (permanently) over multiple sessions. In this newer (and better) update to Zombie Kidz, students must defeat the undead in the halls of their school or be overrun.

As a legacy game, Zombie Kidz Evolution is designed to keep kids entrenched in its campaign, from sticker trophies to envelopes with new missions and tougher difficulties. Although I’m not usually a fan of this style (I prefer replayability), I can’t deny how this game teaches kids long-term thinking and consequences.

If you want a mix of dexterity as well as pattern recognition, then the Ghost Blitz series is for you. Players reveal a card with colored objects and simultaneously try to grab the correct ones, but beware – some of the cards don’t precisely match.

Ghost Blitz has numerous sequels, including Ghost Blitz 2, Ghost Blitz: 5 to 12, and Ghost Blitz: Spooky Doo, each stand-alone with new items and rules. They’re all great fun, although I think 5 to 12 was the best expansion as it upped the ante in matching and grabbing.

Sometimes players want to work together and try to beat a game through exploration and battle. In Ghost Fightin’ Treasure Hunters (GFTH), players move around the board searching for treasure, trying to evade (or defeat) ghosts before the entire place is completely haunted.

Reminiscent of other “move and action” games, like Flash Point or Maximum Apocalypse, GHTF is an excellent intro for late elementary school. Its Creepy Cellar Expansion Pack expands on the game more, giving it new life as your kids grow older. 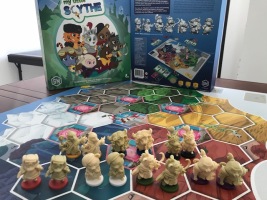 Once more, we find a simplified version of a hit game, and it does its job quite well. Instead of an alternate, dystopian 1920s, My Little Scythe involves animal heroes embarking on a quest to be the first to earn trophies in the Kingdom of Pomme.

My Little Scythe is perfect for teaching older elementary kids turn-based strategy, as they learn to use their limited actions efficiently. It also adds a touch of RPG, which is always a plus if you want to get your kids into those later. 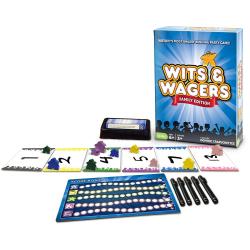 Almost all of the games here don’t necessarily require you to play with your kids; once they know the rules, they can play by themselves. Although great at teaching autonomy, I like games that are for the whole family.

The Family Edition of the award-winning game, a game of trivia and betting on the right answer, provides teaching opportunity and gives your kids the confidence to ask you questions. You might be surprised when they have knowledge you don’t!

These are just twelve games published over the last decade that I’ve enjoyed with my children. If you have a chance to check them out or were considering buying them, I hope they provide as much entertainment (and learning opportunities) as they did for us.

Don’t see one of your favorites? Let us know in the comments below what children’s games from the 2010s made the top of your list!