H.P. Lovecraft and the Cthulhu Mythos is probably the most over-saturated tabletop gaming genre, outdoing even such blockbuster franchises as Star Wars or Pokémon. Over a hundred tabletop games based on Lovecraft’s works have been published, from top hits to some questionable productions, and that’s not even including a top-ranked RPG (and various spin-offs).

I’m not sure what tabletop gamers’ obsession with Cthulhu is, as you don’t see this much devotion to other major literary franchises (even other horror icons). I’ve enjoyed many a Lovecraftian game, however, so I decided to support Reiner Knizia’s Miskatonic University: The Restricted Collection (especially since Chaosium published it).

Players portray professors at Miskatonic University who are given a shot at becoming the Head of the Library Committee, and thus access to MU’s darkest secrets. To do this, however, they must brave the Restricted Collection, collecting the most lore while also maintaining their sanity.

The academic who makes it in and out, with the necessary knowledge (and their mind intact), wins! 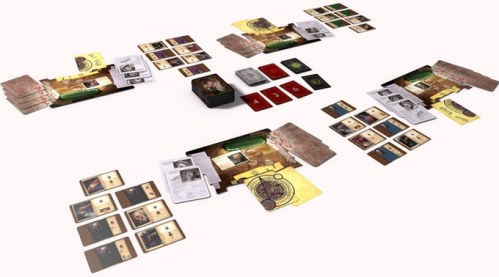 Miskatonic’s rules are deceptively simple: either you stay in the Restricted Collection and draw a card from the Library Deck, or you leave “the room” (and your turns are over for that round). There are no hands to refresh or discarding (beyond a few special rules); each turn you draw the card and deal with the consequences.

Why would you want to leave and not keep drawing? It boils down to the basic mechanic of gaining points by collecting different cards: Grimoire Fragments and Sigil Pieces.

If you collect the three different Sigil Pieces, you discard them and gain a 3-point Lore card. Similarly, if you receive five different Grimoire Fragments (and there are seven different types), you also discard those for 3-points.

The catch occurs when you draw a Sigil or Grimoire card of which you already have a copy – facing the same “knowledge” twice is too much and will send you screaming from the Restricted Collection. You are “expelled” from the round, lose any cards you’ve accumulated (including lost Graduate Students), and gain no Sanity points.

Thus, some players may choose to play safely, accumulating only a few Lore points, before cutting their losses and leaving. Those that leave first gain the lowest available Sanity for the round, but at least they earn some points in addition to keeping any Graduate Students they’ve found. 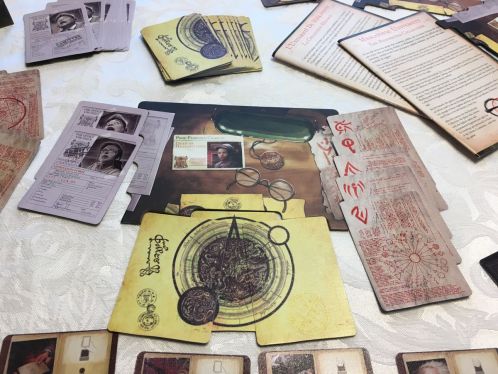 The game is more than Sigil and Grimoire collecting, however, as there are two other important cards: Defense cards and the aforementioned Graduate Students.

Defense cards are abilities each player has that allows them to be proactive or reactive in their search of the Library Deck. Seven defenses exist, and they range from laying out the first three cards face-up (and choosing to draw from them or the deck) to giving a player the drawn card (instead of keeping it and facing the consequences).

The downside is that each of these Defense cards is usable once, before being turned over, and may only be refreshed through a couple of techniques.

The easiest is to collect Graduate Students, which are also found in the Library Deck; if you collect four of these cards, you discard them to refresh (flip over) a single used Defense card. As you only keep Students if you leave the collection willingly, choosing whether to exit the round early is an important strategy.

The other way to refresh a Defense card is as a consolation of having drawn a duplicate Sigil or Fragment and being expelled. You lose all collected cards (including Graduate Students) and gain no Sanity for the round, but you can refresh one Defense card. 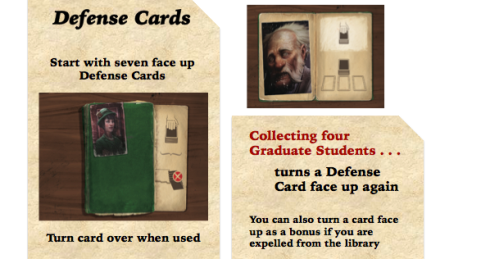 Miskatonic University takes place over five rounds, each with different possible Sanity rewards. Each game is set up with one steadily increasing black Sanity award (6 through 10) but also random red Sanity awards (which range from 2 through 6).

Players who chose to exit the collection, leaving the round first, take the lowest value of the red Sanity cards; they’re safe for the moment but at the risk of other players taking higher points. Conversely, those who stick around longer have not only better chances at Lore points (through Sigils and Fragments) but also receive the next-highest value Sanity card (which may be the black card).

Of course, as mentioned, if you don’t leave voluntarily (i.e., you’re expelled because of a duplicate card and no defense against it), then you gain no Sanity card. The lowest card is shuffled back into the deck and play continues with whoever remains within the Restricted Collection. 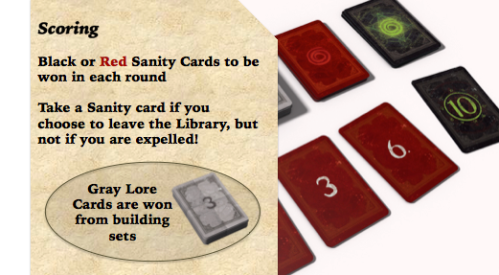 Miskatonic University is a game of RNG and risk-taking, with minimal strategy; each round is a test of whether you’re willing to wager what’s drawn against what you’ve accumulated. Early on, you have plenty of Defense cards to help prevent duplicates, but as the game continues you end up exhausting your safety net.

Unfortunately, Miskatonic is also a game of sheer luck at times, as what you draw is entirely random. The Library Deck is refreshed each round (minus any Graduate Students kept), so there’s no card-counting, and the chances of drawing any given card remain high.

We had rounds where people kept drawing Graduate Students, refreshing their Defense cards and always having the edge. Alternately, there were rounds where an individual was expelled almost immediately, as they pulled a duplicate on their second turn and had no applicable Defense cards remaining.

This RNG and luck, with minimal strategy, may frustrating players who want a little more control and planning. The game flows so fast because it’s “draw and play,” with little need to ponder the board or try to create a long-term strategy.

Although not a perfect game, given this significant randomness, Miskatonic University has several positives.

One is that it’s fast, as we mentioned, with simple rules; players seemed to understand the gameplay within a single round or two, and most games (five rounds) were done within 30 minutes. Between this speed and its compact style (it has a neat book-shaped box), this game would rank well for a travel game.

Another is the overall “game space” style and art, which is a bit unique. Each player’s board, representing their professor, has slots to fit the Students, Sigils, and Fragments, allowing you to keep track (and look for duplicates) easily.

Also, the artwork is classic Chaosium, with that Lovecraftian Noir appearance in everything from the character portraits to the Grimoire and Sigil symbols. The box (mentioned earlier) also looks fantastic, mirroring an ancient mythos text that would sit on a dusty shelf.

Overall, Miskatonic University is a decent addition to the hundreds of Cthulhu-based games, but unfortunately, it isn’t among its best. Chaosium’s latest product is fast-playing, easy to learn, and compact, but it has minimal strategy and relies a bit too much on RNG and luck.

Although it has some optional rules in the form of a new Defense card (allowing you to skip your turn) and a new “wild” Library card, these aren’t enough to ignore that this game is about taking risks rather than thinking. Any excitement is more akin to gambling in Vegas, rather than the strategy found in most tabletop games these days.

I still recommend giving the game a shot, primarily as a traveling or party game (it supports up to five players), as we did have fun. Maybe the forbidden knowledge of the Restricted Collection is right up your alley if you’re willing to wager your sanity.

I give Miskatonic University a sanity-breaking 3.5 eldritch horrors out of 5.