My Girlfriend is a Shob**ch

Anime series: 10 episodes (there are more but they’re uncensored and on the DVD)

Every now and then it’s great to watch a series that is out-of-pocket to balance out all the gore, action, fantasy, and mecha. Well, this anime is SERIOUSLY outta pocket and I’m here for it!

The title is probably jarring to you, but it’s what made me wanted to watch because…well, my curiosity will be the death of me obviously. My Girlfriend is a Shob**ch is basically about the blossoming and hilarious love between two 2nd year students, Akiho Kousaka and his love interest/girlfriend Haruka Shinozaki.

In the beginning of the short series, Kousaka wakes up from an oddly sexual dream and reminisces on his 1-year one-sided feelings for his crush, Class Representative Shinozaki, who was in his dream. She is the typical class rep student from any other anime. She’s pretty, smart, athletic, and just an all-around model student. So after a lot of pep talk, Kousaka finally builds up the confidence to ask her out. She says yes and all is well until…she tells him that she’ll be the best girlfriend for him by memorizing all the first 50 sexual positions. Excuse me?! 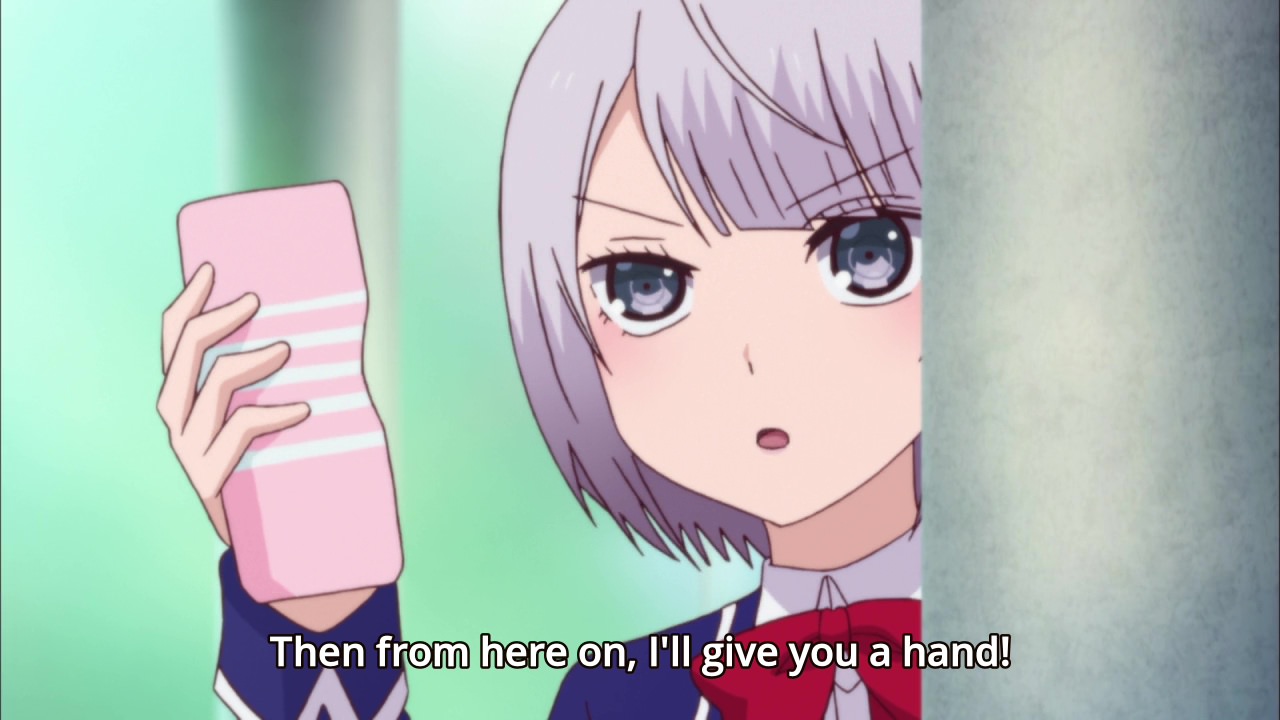 This is exactly what you think it is

If you are kind of shocked and put in a state of WTF, you’re not alone here. So was Kousaka. You see, Shinozaki is a very…out of pocket person. She’s not necessarily sexual, she’s a virgin btw, she is just very candid about sex and it’s hilarious and odd because she says it with a straight face. To her, talking about sex and sexual things is as natural as talking about math. And this puts Kousaka in hilarious and humiliating situations each and every time. She’ll either say embarrassing things such as him being a lolicon who needs to smell the rain hat of a kindergartener (major running joke and no it’s not true), get totally off base on what he wants like when she thought he as a Sub, or she’ll talk to him about his masturbation habits. All the while she is totally missing the verbal and physical cues that he is totally uncomfortable or never knows how to respond to this. Somewhere mixed in there, she also tries to be a good, attentive girlfriend which also gets lost in the sauce. Example being, she read that a girlfriend should always know what her partner is thinking and be able to cater to their needs. So she started predicting everything and bringing him food, a towel and water during gym, etc. All of it sounds sweet and all, but she was so cut and dry about it, no cutesy smile or anything, that it came off to everyone else that he was making her do this like a pet and not a girlfriend. 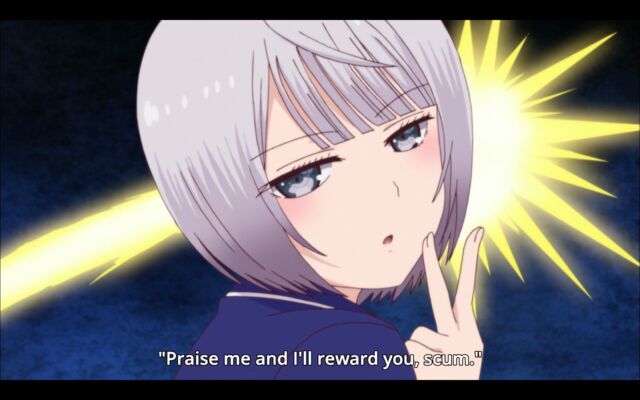 To make matters interesting, since this is a harem anime after all, there are other people in this series that make things tricky for Kousaka in a sexual way. You have a childhood friend who is the kind of character who makes 1,000,001 sexual jokes and innuendos but is super shy and clearly a virgin when things get too real. You have a younger sister who is the loli-catgirl of the series with a brother complex. A rich girl who transferred from an all-girl school where there were a lot of…INTERESTING relationships and interactions between the girls, so she tends to be VERY touchy feely with girls versus boys. Especially with Shinozaki. And then…of course, you have a guy who is super popular with girls but he is only interested in male-on-male relationships so…Kousaka is his prey most days who just never reads ANY of the danger signs!! Thank god he has Shinozaki who tries to save him.

He was trying to devour Kousaka!!

Before you check out and write this off as a typical and overly sexual harem anime, hear me out on this. Yes, it is VERY out-of-pocket but it has a lot of redeeming qualities. When the sexual jokes and things stop, at the heart of it all is really just 2 people trying to learn to care and love each other. Shinozaki does try her best to be caring and tries to do simple things for her boyfriend like cook him a lunch (even though she SUCKS at cooking) or holding his hand without being shy about it. Same goes for Kousaka. He usually looks past the sexual junk she says and sees that all she is trying to do is be an ideal girlfriend and this is how she does it. She does work hard and she does push herself to try and be his ideal, and he appreciates her hard work and loves her more for it. Until she ruins the moment with talking about sex toys or something. What makes this series rewarding for me is that when her parents are introduced, you can CLEARLY tell she gets it from her mom and her dad is pretty much in the same boat as Kousaka. They are brothers-in-arms and it’s hilarious. 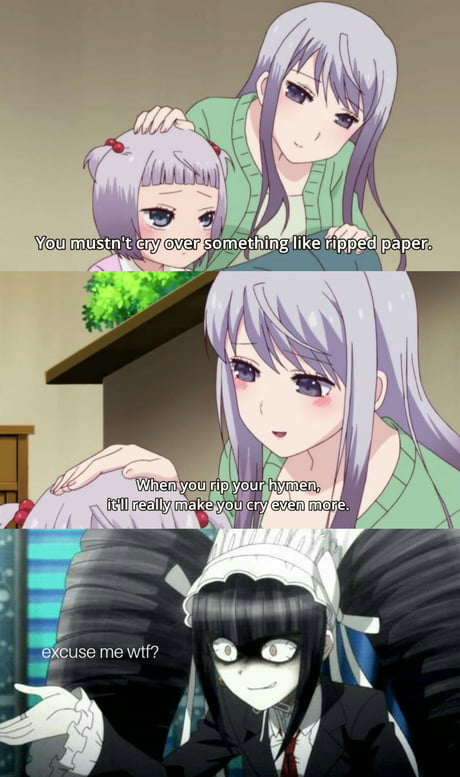 Celestia (Danganronpa) is pretty much me

All in all, the anime is a goodie to watch when you’re in the mood for something hilarious and to just binge when you’re down. I like how candid and open people are about sex in this show which is always nice since we live in a world almost opposite of it. I love the interactions between the characters when though I wish his childhood friend would just get real and go away some episodes. I LOVED the surprise BL sempai who just pops up and is so freaking thirsty! I was so scared for Kousaka, but thankfully his girlfriend can smell the hunter a mile away!

And he just says this and NO ONE BUT SHINOZAKI GETS IT!!!

Just give it a watch and prepare to annoy your neighbors, roommates, friends, and family because you’ll die laughing. It gets worse and worse each episode for Kousaka and I couldn’t deal! 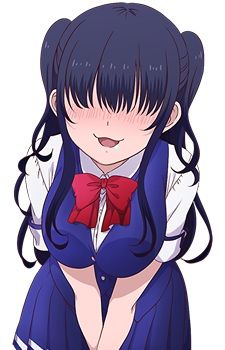