I don’t typically preorder video games. I prefer to wait until reviews start coming in, see which of my friends are playing, and hold onto my hard-earned money until I know I want to spend it. The few games that I have gone and preordered have been…disappointing, to some degree. However, when Red Dead Redemption 2 was announced back in 2016, I knew I was going to be playing it the second it came out. I was a huge fan of the original Red Dead Redemption (which I affectionately referred to as “Grand Theft Horse”) and was excited to delve deeper into the amazing open world and story that Rockstar crafted with their franchise. The early previews started dropping, gameplay started getting leaked, and I was already hooked. Months of waiting later, and there I was at 11:59pm last night, controller in hand, game installed and preparing myself to be let down by another poor choice of preorder. After all, nothing’s ever as good as you expect it to be, right?

Red Dead Redemption 2 isn’t as good as I expected. It’s even better.

So, saddle up your horses, pour a glass of bourbon, and let’s delve into what may very well be one of the greatest games ever made. I haven’t made it too terribly far into the story yet, so any spoilers will be minor at absolute worst and shouldn’t be anything that Rockstar hasn’t already talked about in their videos leading up to launch.

I could stare at this landscape for days.The graphics in this game are some of the best-looking I’ve ever seen in a game, period. You could lose yourself just staring at the incredible amount of detail in the environment, watching the sun rise and set, the wind gently rustling the trees. The draw distance is incredible and made all the more exciting because you know you can actually go to those mountains out on the horizon. The motion capture is on point, and sometimes I found myself forgetting that I was playing a video game and not watching a Western. The game transitions between cutscene and controllable gameplay completely seamlessly with no drop in quality whatsoever. There’s even a control built into the game for long horseback rides across the country where you can transition to a cinematic camera. Rockstar tried to implement this in games past like GTAV, but more often than not, it was just a hindrance. The moment you turned on the cinematic camera in the middle of downtown Los Santos, you’d find yourself swerving directly into pedestrians and other cars. Not the case in RDR2: the cinematic camera works almost flawlessly and you can really get a sense of the scale and love that went into this masterpiece. 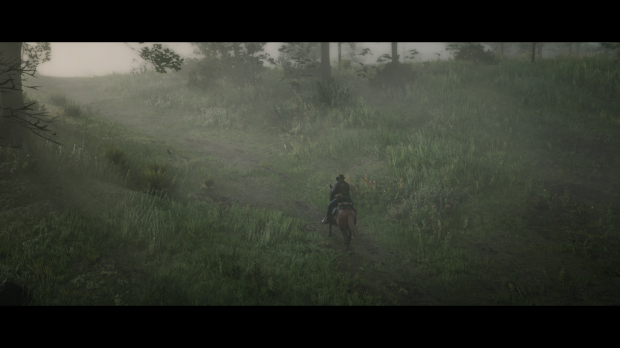 Cinematic camera at work. This is not a cutscene.

Story/Writing
The first Red Dead Redemption had a great story behind it. You played as former outlaw John Marston who is trying to settle into a normal ranchers’ life, but gets drawn back into violence by government agents who force him to hunt down and kill his former gang members. I sank so many days into that story and I would happily do so again: it’s a violent rollercoaster of emotions and drama set against the backdrop of a dying Old West. Honestly, I wasn’t sure that Rockstar was going to be able to live up to the first RDR, but it seems I underestimated them once again.

Despite being the second Redemption title, RDR2 is actually a prequel, and you play as a member of Marston’s old gang back in their heyday. The game starts you and the gang off in a bad way after a robbery gone wrong, and despite the capabilities of everyone present, the situation is desperate. The story thus far has been about finding your missing gang members, staying a step ahead of the lawmen hunting you down, and keeping your people alive. It’s all about survival in a story that lends itself wonderfully to Rockstar’s open world. Yes, I loved Marston’s hunter-killer storyline, but I’m finding that Arthur Morgan’s story is more my speed.

Characterization
Wow, where even to begin with this topic? The characters that I’ve seen and interacted with so far actually seem like real people. I’ve already talked about the beautiful mocap, but it’s the voice acting and scripting that really makes this game shine. I’ve played so many games with NPCs that seem to be important, but I don’t even remember the names of, simply because they didn’t resonate. Not the case here: I’ve only been playing for a couple of hours, and I can already list off all the members of my gang, what they look like, how they talk, how they act, and whether I can count on them to have my back. It’s absolutely breathtaking how much these NPCs seem like actual human beings.

As for the character of Arthur, Rockstar solved the one issue that I ever had with RDR’s story. The game had a morality meter and you could be an honorable cowboy or a thieving, murdering bandit to your hearts’ desire…but I never felt like it worked. The cutscenes with John Marston portrayed him as a pretty reserved, polite character and for me, him robbing trains while trying to kill his former brothers in arms and get back to his family never made much sense. With Arthur Morgan, however, the morality meter makes its return and now you get to make choices about how you interact with the world. There are quick and easy dialogue options where you can politely defuse a situation or aggressively set it off. There have been several story events where I have gotten to decide who lives and who dies, and no matter what, I’ve always thought, “yeah, that seems like something Arthur would do!” It’s not as in depth of a system as some of the more hardcore RPGs out there today, but it’s enough to let the player decide what kind of character Arthur is.

Controls
There’s so much stuff that you can be doing at any given moment in RDR2, and that means that Rockstar had to get creative with their control mapping. If I had a negative thing to say about the game, it would be that the controls have been, for me at least, a bit of a learning curve. It can be a bit difficult to remember what buttons do what, especially when they can change depending on the current scenario. There’s a particular button for focusing on NPCs and the surroundings to interact with them, but unfortunately, that same button is the “point your revolver at this police officer and start a gunfight in the middle of town if you forgot to put your gun away” control. RDR2 gives you the necessary tutorials and I like that they don’t hold my hand throughout the game, but there’s a lot to learn and it might be some time before I feel up to snuff.

Combat is surprisingly slow, and I by no means intend that as a bad thing because I think it’s wonderful. Every shot feels deliberate, every bullet impact on a foe is a moment of triumph, the scenery around you shredding as rounds tear through it…it’s one of the most fun shooting experiences I’ve had in a game. You can’t just stand up, guns blazing, and drop twenty foes in the blink of an eye. You don’t have the GTA weapon wheel of every single weapon you’ve ever unlocked: you’ve only got as many guns as you can carry, which is usually only a rifle and a sidearm. You must take your time and think, because every shot you miss is another half second that you need to cock your revolver and get another one off. Slowing combat down in such a manner makes everything feel more personal and involved, and I’ve found that I like it a hundred times more than the run and gun style of gunplay that most games seem to have these days.

Red Dead Redemption 2 is beautiful, emotional, and thrilling. I’ve gotten a huge sense of scale already, but I know I’ve only seen the tip of the iceberg. I haven’t even gotten into any of the crafting, hunting, or gun customization that the previews have shown us, and it’s not because I haven’t wanted to. It’s because this game is so unbelievably vast and detailed that half my time has been spent just staring at the scenery or answering the question, “what happens if I hit this button when I interact with this thing?” There’s so much to explore in the tiny sliver of the map that I’ve unlocked and based on what we’ve seen so far from Rockstar, I’ve only uncovered a tiny fraction of it. I can already tell that I’m going to sink dozens of hours into this playthrough alone, then probably start a new campaign where I make Arthur act like a black hat (I’m currently playing him as honorable), and that’s all gotta be done before the online multiplayer drops sometime next month. An outlaw’s work is never done.

P.S. I have not yet confirmed that in-game horse genitalia shrinks in cold weather, but I have confirmed that they do defecate at random. I’ll drop a picture of it if I remember next time.