It’s been slightly over a month and Red Dead Redemption II has been one of the biggest selling games of 2018. Its storytelling has been stellar and visually, it’s one of the best-looking games of this console generation. Just recently, the online component has opened up, and many of us have hopped on to see how dynamic a world it is. Here, we will tell you a bit about our experiences – and of course we have taken into account that this is the beta.

Harry
I literally woke up on Saturday to find that the online component was live, and immediately dove in. The first thing that impressed me was that the character creation set up took into account the time period and is very robust. Players should be able to start with a satisfactory looking character out of the gate. Even though it may be a small thing to some, I was also impressed that gamers can create female avatars as well.

Once the game starts, you will find yourself in a story. A group has broken you out of jail and wants you to exact revenge for a murder. You run a few small missions to get acclimated, and then off you go.

I think one of the first questions that was answered for me was whether or not gamers will have the same starting points. My starting point was in the southwestern portion of the map which encompasses the first RDR game. One of my other friends said that his start point was somewhere near Rhodes, while still another said he started near the Grizzlies. Regardless of where you start, you can always choose to move your camp once you have the currency to do so.

Graphically speaking, I did notice a couple of things… There is a big frame rate drop as opposed to playing the single player game — and this is to be expected. Once the server goes live and hundreds of players get in, there will need to be some balance to the game world. The biggest thing I noticed is that there seems to be a graphical difference when playing the old RDR areas as to playing in the newer sections. When going through places like Armadillo, Hennigan’s Stead, and a few others, the draw distance isn’t the same as going through St. Denis, Valentine, Strawberry, and other towns in RDR2. I am not sure if this is something having to do with issues on Rockstar’s end in integrating the areas, or if this is a ‘cut and paste’ job that may get fixed later.  Again, it’s a beta, but it’s something worth keeping an eye on.

As far as the gameplay is concerned, because it’s a beta, it still feels like a work in progress. I had a few hiccups with game sessions not loading, as well as some matchmaking issues. The world does feel occupied by NPCs and gamers, but there are a few things that feel ‘off’. For one, where are the trains? There is one train in Rhodes and it stayed in the station the entire time my friends and I played in that area. Also, when we formed a posse, we were unable to find and play any co-op missions so we just free roamed for awhile. On the other hand, I am pleased that because XP can come from anywhere, it’s not difficult to level up. However, it feels like a lot of items that you want to get will require a lot of grinding and a lot of money. I will defer to Manny (below) to speak on the economy system.

The only other annoyance I have is dealing with a lot of unwanted PvP issues with people online. You have to find a safe place, preferably your camp,  if you want to review maps or mission logs.  It’s annoying as hell to go to a town and as you are plotting your next move, some random kid who is playing, comes along and shoots you, or in one of my more embarrassing moments, lassoes you and drags you through the streets. He was dealt with once I got loose. I have had people attempt to steal my horse. Something needs to be done with the griefing or minor annoyances may turn into major reasons to not play.

For the most part, the few hours that I played have been fun; but I can tell that a lot still needs to be fixed before this game opens up to the general public.  The map is HUGE and having the ability to go back through the original RDR areas really was a heartwarming experience. The question is, what will Rockstar do to fix issues ahead of the release and beyond to make this a viable online game in the years to come?

Manny
There’s no doubt in my mind that Red Dead Online is going to be fun. I’ve been playing the Beta now for the last day or so, both solo and in posses of various sizes, as well as with friends and randoms (a couple of which have been added to my Friends List). Still, there’s no doubt in my mind that Rockstar Games is going to have an EA-sized mess on their hands if they don’t fix the game economy. Microtransactions are the bane of the gaming community, but Rockstar has seen that they can be a license to print money, with GTA Online making over $1.09 billion since it launched. Since it’s basically pure profit, it’s a big reason why they haven’t bothered to make any DLC for GTA 5 and why they can continue to keep adding free content on a steady basis.

The developers haven’t bothered to release any details for the online store for RDR2, but one can start to make assumptions based on the in-game economy as it stands. Players are rewarded either via cash or gold nuggets. Collect enough nuggets and you can turn it into gold bars. These gold bars can then be used as an alternate currency. Switching from the single-player story mode to the online portion can be kind of a financial shock.

In story mode, one gets used to regular rewards of $25 or more, for example, but then get a cold bucket of water thrown in their face when online they might get 9 or 10 cents or a nugget or two. That shock is further compounded when you look at the prices of game items. Guns and rifles (which let’s face it, you will have to buy and improve in order to stay ahead of the other cowboys and gals) can easily go from $300 to upwards of $700 or more at the gunsmith, horses and their various accouterments can go from $40 to $1000. Then there’s the daily upkeep fees–fees for your camp, fees for maintaining your guns and for buying ammunition (which you will have to do constantly if you participate in the various activities outside of horse racing). As a player, you will constantly be grinding small payouts for large payoffs–unless one is willing to fall into the microtransaction trap once the in-game store goes live. My hope is that this gets fixed before the beta ends, as finding issues and making adjustments is the purpose of betas after all.

UPDATE: While this article was being written, Rockstar released an announcement in regards to fixes coming to Red Dead Online, to include balancing the economy. 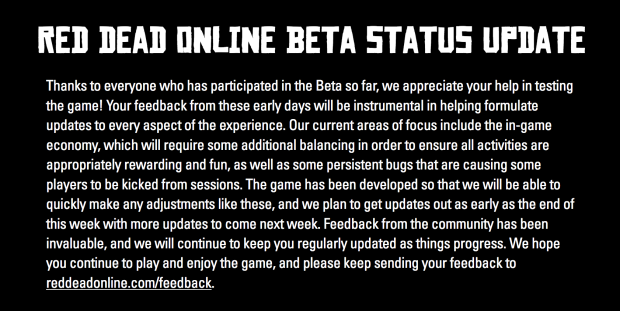 It’s always good to see when a developer takes the time to listen to their customers and takes their feedback to heart. The changes will be coming this week and next. Hopefully Bethesda is taking note of this and applies the same philosophy to Fallout 76.

So, there is a lot of potential here for this to be a great online community. Still, whether or not Rockstar fixes it will determine the online future for this game. Yes, it’s a beta, but we’re hopeful that problems found here will be weeded out before it’s fully launched.