Streaming/Where to watch: Not currently licensed, airing on TV in Japan. (aka: find it however you can)

I blame the fact that I love this anime already on me rewatching Van Helsing on Netflix, and I ain’t mad at it.

Let me tell you about a series that is so new, I haven’t even seen episode 3 yet and I’m already invested in where this is going! Sirius the Jaeger premiered on July 12th, and I’m just now hearing it about it. Since it’s so new, there isn’t a whole lot of info on it, but the premise for right now is very simple. Set in the 1930s, vampires exist  and are doing typical vampire things; feeding on humans, messing with humans for fun, destroying lives in general, etc. There is a centralized group of vampires called The Arc of Sirius, who made their way to Japan, and who are the focus of all the bad stuff. Their enemy, (the good guys), are known as Jaegers. Jaegers are a group of people who carry around musical instrument cases which hide weapons and their main focus is to hunt and kill vampires. One of their current secret-not-secret weapons is Yuliy. He is a werewolf who had his entire village destroyed by vampires so he is all about the revenge; or so it seems. At the end of episode 2, it seems to be more than just the typical ‘I hate vampires for killing all my friends and family’ story. It’s too early to call but this series seems to be a fun goodie. 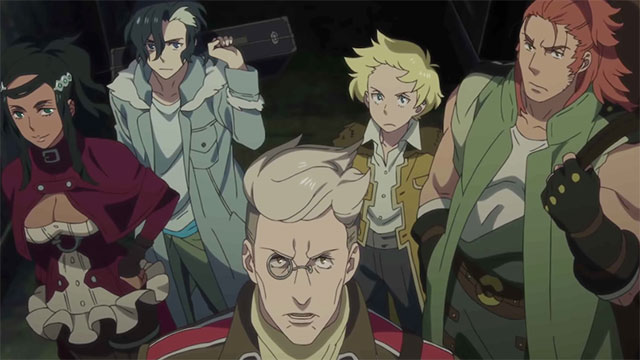 Jaegers: Dorothea, Yuliy, Phillip, and Fallon. Willard (in front) is the leader.

I’ve seen a lot of vampire animes, and usually the stories don’t differ all that much from each other. My top 3 faves would have to be the Vampire Hunter D movies (1985 and Bloodlust), Hellsing (both the TV and OVA/Ultimate), and Castlevania. These animes don’t necessarily center around Dracula, or the idea of Dracula, but he plays a role in each. For those who don’t know (How fam? How?!), Alucard is Dracula, D is the son of Dracula, born from the union with a human woman, and Castlevania is pretty much about how the world is dealing with terror and trauma after Dracula goes postal following the murder of his wife.

What I’m getting at is this: in a lot of vampire animes or non-anime related movies about vampires, Dracula, or some form of him, plays a role and drives the plot. As much as I LOVE Dracula, all the lore behind him, and his importance to the vampire lineage, it gets old after a while. You start to wonder if that’s all you can draw from a good vampire anime. That’s why I appreciate Van Helsing with Hugh Jackman so much. Still the same old Dracula kind of story, BUT with the twist of adding other legendary monsters like Frankenstein and werewolves made it interesting. Sirius the Jaeger is lowkey giving me those same kinds of vibes, because they’re going from the angle of a werewolf who is hell-bent on taking down vampires; especially the ones who ruined his life. There is no sense of Dracula or the idea of Dracula (which is refreshing), and it seems there is going to be a dynamic shift with Yuliy.

Yuliy with his weapon, a version of a sanjiegun (or 3-section staff)

Who knows what will happen 5 episodes from now, but I like Yuliy and what seems to be taking place with him. The other members of Jaeger have distinct personalities but no back story as to why they’re hunting vampires yet, so I can’t speak on them. EXPECT DOROTHEA! She is a brown WOC with long black hair, deep green eyes (which you can’t beat), and is the 2nd in command of Jaeger.  SIGN. ME. UP. FAM. Anywho, Yuliy for the most part is well-composed and seems to be a source of peace, but when he gets a whiff of a vampire or deeply engages with one, he gets tunnel vision. He will go after that vampire until it is dead or until he is taken down. It wasn’t made obvious that he’s the werewolf in the group. I only knew because I watched a promo trailer for it and someone mentioned it in the caption on Facebook. You don’t even get a hint of him being a werewolf until someone mentions something about beast blood, or when Yuliy got too deep into this fight with a lady vampire. My first thought was, if he is a werewolf, why isn’t he “changing” or using claws, biting, etc.? I think the fact that he isn’t doing that yet or seems to be holding back from doing it is what’s keeping me around, especially when his (maybe) older brother shows up. I love how Yuliy isn’t a typical werewolf or has wolf like traits that would give him away. I feel like if it did, that would’ve taken me all the way out.

So far, the vampires seem to be not completely typical, but not completely different to what you’re used to seeing with vampires in anime. They blend in with humans, they don’t do sunlight, they have different colored eyes, they’re crafty, etc. Still, they remain interesting. I’m curious as to why some formed a formidable group and what their game plan is.

Agatha (vampire) and a doctor

All in all since there isn’t much to go on about this show, I’m going to keep it on my radar. I see potential and I do recommend giving it a shot. The animation style is really good, the vampire design (after they drop their pretty human form) is dope, and the music choices are great! If you love old timey kind of animes, this is it. Remember, it’s set in the 1930s, which makes me wonder if they’ll follow real-life history in this anime. However you find this series, whether it be online or watching it on live TV, since it is new I’d suggest letting a few episodes build up before jumping in. Unless you don’t mind waiting week-to-week like me. If you don’t mind, it seems a new subbed episode drops between Thursday-Friday.