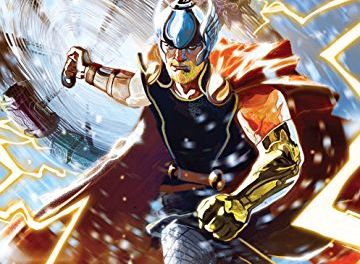 Long runs are a tough game in superhero comics. Given the looming shadow of movies demanding a familiar take at times, the problem of outdoing yourself over an extended period of time, and of course whether people will respond to one person’s take. With Thor, that take that anyone can point to as the platonic ideal was always Walt Simonson. However, Jason Aaron’s six years on the book have proven to be fantastic individual points in their own right and have effortlessly reinvented themselves each time. Each act of Aaron’s run has been part of the mega-story he’s been writing for six years, but each has a distinct feel: from the initial few years focusing on Thor Odinson, 2014-onward focusing on Jane Foster’s picking up the mantle, and now back to the Odinson’s resurgence as Thor. What follows next is a pretty thrilling comic.

While Thor is a new #1, it’s an effective continuation of last month’s finale to the Jane Foster era of Thor, and by extension the story that’s been brewing since way back in 2012. Thankfully Aaron makes the story to follow with a simple if spanning premise: Thor still isn’t worthy and is working his way back up, just in time for the War of the Realms to kick off.

That being said: it’s also great that Aaron hasn’t stopped digging deep into the bench. Thor has a fantastic supporting cast and it’s good that “Fresh Start“ doesn’t mean the characters who’ve populated the book for the last six years (including previous Thors) are going to get left behind. However, Aaron offers up a Thor problem no one has really explored before and it’s one that proves to be quite promising. In addition, while it is sad to see Jane Foster’s story–a woman who inspired the gods–end, it is interesting to see the baton shift in turn back to someone who needed that act of courage to reignite them.

One of the best parts of this Thor run has been to see what artists come through. Esad Ribic was the initial artist on this book when it was Thor: God of Thunder and he left quite a lot to live up to. The same can be said for Russell Dauterman during Jane Foster’s time as Thor. Now Mike Del Mundo, one of Jason Aaron’s previous collaborators from Weirdworld, returns and he brings Hel with him. The heavy metal meets Lord of the Rings tone of Jason Aaron’s Thor run feels very much at home here. Everything from monster buggies, Hel-Hounds, and the Juggernaut get their day under Del Mundo who helps to sell the story Aaron is telling here. Marco D’Alfonso’s colors also help Del Mundo’s art to pop. All told, any reservations I may have had about the continuation of this run, have pretty much evaporated. This extends to Christian Ward (who illustrated one of the best issues of Al Ewing’s Ultimates run), who illustrates a backup story returning to King Thor’s story at the end of time. As with Del Mundo’s story, Ward creates a visually eye-popping story. One also distinct from the main story and frankly any return to a crankier King Thor is always welcome. All told, you’re coming in at the long end of a years and century spanning story. This is as good start as one will get and the art alone is very much worth it.

5 Monster Buggies out of 5

What's there to say about me? Well I'm an avid fan of comics, video games, tv shows, and movies alike. I love to read, consume, and discuss information of all kinds. My writing is all a part of who I am.