World building is a key element of story craft in which an author creates and defines the universe in which he or she will write. Good world building is consistent above all else—and also gives the story meaning. A Google search of “world building” pulls up almost 150 million results, almost all of them relating to fantasy and sci-fi series; TV Tropes, for example, cites both The Lord of the Rings and Dune.

That said though, world building is just as important—if not more so—for work set in the real world, in the universe that we, as readers, also inhabit. To illustrate this, let’s look at the example of Briony Hatch.

Briony Hatch is a graphic novel by Ginny and Penelope Skinner. It’s a coming-of-age story in which the titular character is afraid of growing up. As stated on the book jacket:

“Briony Hatch hates reality. She prefers the fantasy world of her favourite novels: The Starling Black Adventures, in which ghosts are real and you can cast magic spells to defeat your enemies. In real life, Briony’s parents are getting divorced and her friends are preoccupied by losing weight and shagging boys. Worst of all, Briony has almost finished reading the last ever Starling Black novel. But Briony is about to learn that fantasy and reality aren’t always so easy to distinguish, and life doesn’t have to be dull just because you’re getting older.”

Now that’s powerful—as a lover of fantasy novels, the child of divorced parents, and someone who’d like to believe that life doesn’t have to be dull just because I’m an adult, I’m hooked. I want to know more.

The first half of Briony Hatch delivers on the promise of the book jacket description. The world presented in the first 68 pages firmly places Skinners’ work in the real world, one in which fantasy novels are the only connection to the paranormal or unusual. When Briony desperately tries to create magic in the real world—and fails—it’s an absolutely crushing moment for both her and the reader.

Just before Briony tries magic for the final time.

Unfortunately, though, the story doesn’t have a chance to grapple with this moment of failed magic, because a real ghost appears in Briony’s room 18 pages later.

Ghosts are fine, really, as long as the world of the story sets them up as a possibility, which Briony Hatch doesn’t—in this universe, characters read fantasy novels to connect with the paranormal. The appearance of a ghost, therefore, is almost too good to be true, something bordering on Dues ex Machina; it’s unsatisfying. It takes away from the poignancy of Briony’s struggles and makes the graphic novel more plot-based than character-based; the sudden transition from character-based to plot-based is jarring for the reader and, for me, Briony’s character development takes a serious hit. 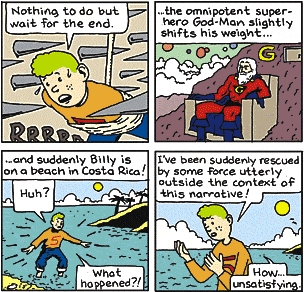 That said, Briony Hatch does have a fantastic message—Briony really does learn that “life doesn’t have to be dull just because you’re getting older.” She  develops as a character by becoming more confident, transitioning into alternative fashion and also dying her hair, both of which, it seems, she wanted to do from the beginning of the graphic novel but lacked the courage to do–at least until she made a ghost-friend.

It’s a cool idea and, overall, enjoyable–I just wish the world building in the first half of the graphic novel had been more consistent with the second half, that the story had made clear that Briony lived in a universe not only where ghosts definitely existed, but where one would appear to her, too.