If there is any reliable success to be found in DC Comics’ cinematic endeavors, it is in its animated branch.

That’s not to say the cartoon universe hasn’t had its share of missteps , but compared to its live action counterpart, there is a significant outpacing when it comes to storylines, character portrayals, and, when called for, canon-compliance. Something else the DC’s animated ventures excel in is building excitement for its vehicles, particularly when it comes to its core cast of classic heroes. When first announced and subsequently marketed, Batman: Ninja had not only the flashy gimmick of ‘caped crusader meets anime’ to bolster it, but the confidence inspiring success of enough of its predecessors to easily capture fandom interest. All that said, Ninja is sadly a middling outing that may have been downright awful were it not for its outstanding animation and the few saving graces of an unfamiliar but hardworking voice cast.

Batman: Ninja takes the familiar premise of Batman against a league of crazed villains and flavors it with an element of accidental time-travel. Transported by an untested experiment courtesy of Gorilla Grodd, most of the Bat-family, and a cast of readily recognizable baddies are thrown into feudal Japan, with the intricacies of time travel landing Bats at his accidental destination a full two years after everyone else. In that time, the likes of the Joker, Two-Face, Penguin, Poison Ivy, and Deadshot have assumed the roles of feudal lords or Daimyo, in order to take advantage of this warring states period in Japanese history. With no access to his usual array of tech and gadgetry, Batman is forced to face some of his most formidable foes with only a small collection of allies, his wits, and techniques of ancient Eastern warriors.

The visuals of this film are undeniably gorgeous, with both crisp computer renderings and a brief interlude in a style modeled around watercolor art. The backdrops are vibrant and costume designs are familiar but inventive, offering nods to well-known character archetypes while steeping them in either traditional Japanese fashions, anime-trope stylings, or a combination of the two. This sleek style of animation also lends itself to engaging fight sequences and dynamic action scenes.

With the exception of Tara Strong, the voice cast is comprised of individuals new enough to the franchise to avoid the nostalgic familiarity found with the likes of Mark Hamill or Kevin Conroy. Keeping that in mind, Roger Craig Smith does his best to capture the clipped stoicism characteristic of Batman, and Tony Hale is a surprisingly spot on Joker, taking equally successful turns at mania and menace sometimes within the same breath. As always, Strong’s Harley Quinn is a welcome bright spot that manages to punch up the inevitable puns and wordplay that forever punctate comic book dialogue.
Unfortunately, the polished look of this movie and the efforts of its actors can do little to guide the plot toward a similar mastery or substance. Somehow, it manages to simultaneously suffer from bloat and a dearth of vital information, stuffing itself full of story and beloved characters without much concern for the whys and wherefores of it all. While I can appreciate the avoidance of heavy exposition, Ninja leaves out a great deal of reasoning altogether, supplying allies, villains, and dastardly plans with little more than a passing line of justification before barreling ahead unbothered. Alfred and several generations of boy wonder join Batman in this adventure with almost no explanation as to how they too became caught up in Grodd’s wayback machine, and seem to be present as convenient tools in the caped-crusader’s arsenal, rather than as the fully fledged characters we know them to be. Deus ex-machina allegiances, so-called ancient prophecies, Bat-gods, and actual machines rise and fall almost at the drop of the hat, with most eventually falling to the wayside to make room for several encounters between Bats and the Joker. 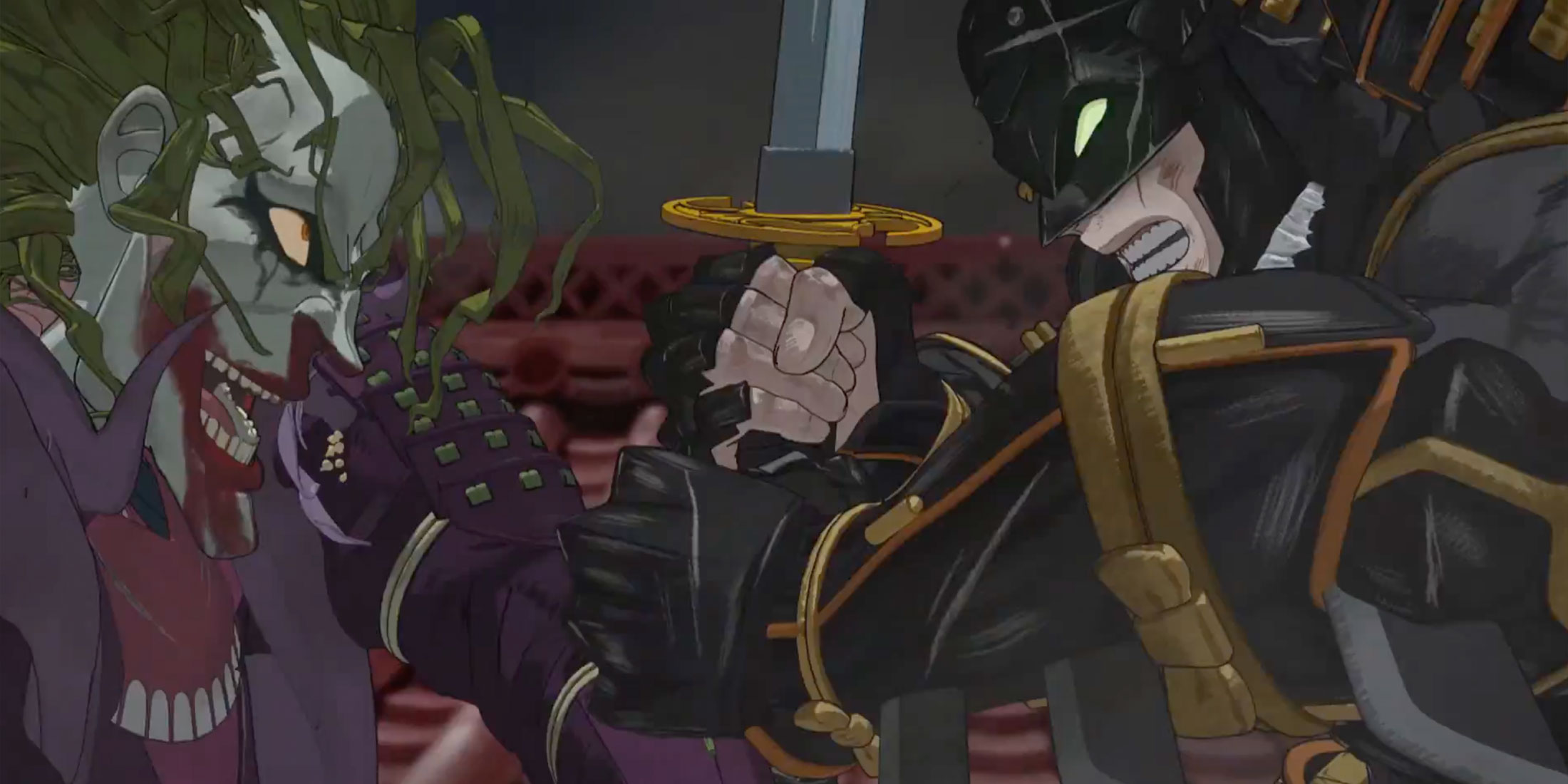 Most troubling of all Ninja’s faults is the script’s treatment of Bruce Wayne himself, as the master tactician and combat virtuoso finds himself almost immediately destabilized by culture shock and a separation from his usual technological advantages. Ostensibly, stories of this nature are expected to pit protagonists against the dilemma of unfamiliar territory, but to see a purported genius-level hero struggle so spectacularly in a climate he has tangible history with is bizarre at best, and unpalatable at worst. In an age of outdated, appropriative tropes, where an outsider protagonist is inexplicably the master of a culture to which they neither belong or originate from, down-playing Batman’s past connection to Japan could be seen as an educated step, but entirely ignoring his very much storied shinobi training to give credence to a physically and culturally off-balanced Batman rings nothing but false.

Not to mention, it becomes nigh impossible to argue sensitivity of any kind when the purported Ninja training is in fact more Samurai-based, and the film’s actual native, Ninja characters fade in and out of the plot like living set-pieces. By the third act, and after a whopping month-long training session, Batman manages to regain enough confidence to battle it out against his Jaeger-wielding foes, but one has to wonder if this elongated lapse into self doubt might have been better left overwritten in favor of say, explaining a few of the harder-to-swallow plot points. The assistance of an unnamed bat deity in the form a giant Animated Series era facsimile readily comes to mind…

As anticipated as this release was, there are a host of prior entries from all parties involved that better satisfy. Looking for spectacular work from Takashi Okazaki? Revisit his masterpiece Afro-Samurai. Want a Batman-centric story steeped in Japanese intrigue? BTAS: ‘Night of the Ninja’ episode and Day of the Samurai, respectively, provide. And in the end, if the pull of this film’s alluring visual packaging prove just too strong to resist, then prepare yourself for a decadent feast of the eyes, but remember not to think to hard about what is actually going on. Oh, and maybe watch it in Japanese, if for nothing more than the experience of peak anime immersion.

-Gorilla Grodd is an interesting choice in secondary villain and plot instigator. There isn’t anything inherently wrong with him, but also, Gorilla Grodd? Really?

-Alfred’s presence in this movie is waved away with a blink and you’ll miss it explanation of having been in the Batmobile when Grodd’s device was triggered. Why was he waiting in the car, one might ask? We never find out.

-Bane makes a brief appearance as a villainous Sumo wrestler, which is cool at face value, but completely confusing when one focuses on it. Did he, the man powerful enough to physically and intellectually best Batman, spend the whole of his two years in Feudal Japan solely training in the art of Sumo? Also, where did he get his fix of body-buffing venom for the duration of his stay? Inquiring minds want to know, but also have a headache.

-I expected some heavy leaning into anime tropes and wasn’t disappointed in areas of giant mechs and fight scenes, but none of that prepared me for the addition of an actual animal sidekick that helped our heroes save the day. Like, I guess…

-The fact that there was not one, not two, but four generations of Robins twiddling their thumbs waiting for Batman while the pantheon of villains took over all of Japan is rather unsettling. Are we actually expected to believe that even Jason ‘Red Hood’ Todd sat back and let a clutch of villains manipulate history unchecked?

-Of the smattering of Robins provided in this outing, I appreciated Tim Drake’s Red Robin the most. Not because of anything he added to the narrative, but because he seemed just as confused by conceptual hoops as I did, namely Damian Wayne Robin’s intelligent pet monkey.

-Batman: What is Batman without his technology.
Me: Uh, still Batman! Pull it together, man!

Rating: Two and a Half Warring Daimyo Robots out of Five