After years of hype and speculation, Rare and Microsoft finally have delivered their pirate MMO. “Wide as an ocean, deep as a puddle.” This is the perfect way to describe SEA OF THIEVES. It is a game full of potential, but empty of content.

Loading into the game, you start off inside the tavern of a random outpost. As a brand new Pirate Captain, the game does nothing to hold your hand. You get no tutorial. I was lucky as my first time playing was with a friend that had been in all the betas. He talked me through and taught me the mechanics, and quite literally showed me the ropes once we got onboard a ship (Thanks Tom!). I paid this forward by doing the same with other friends on their maiden voyages. This “sink or swim” treatment is a refreshing change from other games that inundate you with unskippable tutorials that have to be completed before the fun can start, but some initial help isn’t a bad thing.

The graphics of the game are outstanding. It easily has the best water graphics that I’ve ever seen in any game. You can almost smell the salt and feel the sea spray as your ship crashes thru the waves. The world of the game is really pretty vast with islands, both charted and uncharted, dotting it far and wide. Despite this, there are no loading screens as you go from one zone to another.

I like the cartoonish look to the rest of the game, as it helps to reinforce the fun of the game. It’s goofy but not too much. The character creator is unique in that it takes control away from the player. You are presented with multiple pre-generated pirates and are given the option to choose one and go into the game, favorite a Pirate and re-roll the others until you get what you want, or re-roll the whole lot. The reason for this is because all the cosmetic choices are actually purchased within the game with gold.

Being that the game is setup so that a new sailor can easily jump in with veterans, the only progression in the game is via cosmetics and leveling with the factions. There aren’t any better weapons or ships, merely different looking ones. Once you’ve leveled each faction to Level 50, you become a Pirate Legend. You’ll have access to legendary voyages and access to exclusive locations. There are three types of quests (“voyages”) in the game, given to you by the different factions:

The quest loop of the game is simple and short (trust me on this): 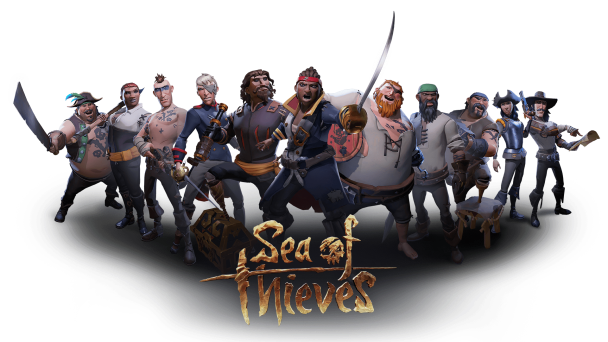 It’s a fun game to play, but with conditions. The game is best played with others. It makes it easy to run a ship when you have a crew. You have your navigator standing by the world map, calling the course up to the helmsman at the wheel. Then you have others manning the sails, constantly watching the wind and adjusting the length and angle of the sails in order to balance speed and maneuverability. You’ll want to have a crewman up in the Crow’s Nest, looking out for other ships, active skeleton forts (given away by a tell-tale skull shaped cloud with glowing eyes in the sky), and the deadly Kraken. When it’s time to fight, the crew can take turns loading and firing the cannons, bailing water and repairing hull damage, or repel boarders. If you have nothing better to do, pull out your trusty flagon and quaff down some grog until you puke. Do this with a group of friends and I’ll guarantee that you’ll have hours of fun. It’s not to say that you can’t do this solo, but juggling so many balls in the air ratchets up the difficulty considerably. Getting a crew of friends together isn’t as hard of a proposition seeing that the player pool is cross-played between Xbox One and Windows 10 PC users. Other than graphics, the player experience is guaranteed to be the same (Reviewer’s Note: I play it on Xbox One X).

Being a free-for-all PVP game, it is truly full of griefers—and not just those in other crews. The game has a mechanic where crews can vote to place players in the ship’s brig. When placed in the brig, the prisoner is at the mercy of the rest of the crew. How long you’re stuck behind bars is dependent on them. Multiple times when joining random crews, I spawned in the brig due to this mechanic. If they won’t let you out, the only way is to simply quit and try again.

Meeting up with other crews out in the open water or on land, one never knows if they will be friend or foe. If it leads to combat, it CAN be fun, at first. The problem with the combat in this game is that there really is no sense of accomplishment because there is no downside to losing. If you die, you’ll find yourself a brief passenger of the Ferry of The Dead before respawning close to where you fell. The only inconvenience comes if your ship is sunk while you’re on the Ferry—you’ll spawn in port with access to a brand new ship, sans any treasure that may have been on your old ship. In the end, PVP combat is pointless and can only serve to annoy and frustrate the player on the losing end.

The soundtrack of the game is rather enjoyable to listen to. Players are able to use instruments—concertinas and hurdy-gurdies—to play shanties together. If a player is already playing a shanty, other players can join in with their instruments and add to the song. One of my favorite things about ASSASSINS CREED BLACK FLAG were the sea shanties—when playing SEA OF THIEVES, I’ll load up a playlist on Youtube and have it playing in the background. I wish there was a similar mechanic in this game as running around looking for more shanties to have in your repertoire would be something fun to do outside of the rinse and repeat of the aforementioned voyages.

Despite all of this, I can’t, in all honesty, recommend that you go out and BUY the game. The grind of the quest loop and lack of options simply takes the fun away after a couple of hours, especially if you’re playing solo. It’s nowhere near worth the $60 price tag. If you have Xbox Game Pass, then, by all means, take the time to download and play it. At most, this is an Early Access game, so you’ll get your money’s worth at the monthly $10 charge for Game Pass. Rare has to step up and add more content to the game—something that they’ve promised to do, give or take three months from now. Honestly, it may be three months too late, at least for this Pirate Captain.

I give Sea of Thieves 3 Jolly Rogers out of 5.

"Man. Myth. Legend. Ladies Man." There are many words that can be used to describe Manny...unfortunately, none of those apply. "DJ, Cat Lover, Man-Child, Wookie" will have to do.