@NBC @JCSTheMusical is a powerful performance worthy of #Webber’s masterpiece

There are many movies or shows to enjoy during the Easter season as Christians celebrate one of their holiest days. From the family-friendly to the epic and spiritual, the story of Jesus is compelling regardless of your faith or beliefs.

Given some questionable live musical broadcasts in the past, how did Jesus Christ Superstar Live in Concert hold up?

I can safely say this performance was probably one of the best I’ve seen. David Leveaux’s direction and the cast’s performance did Webber’s art complete justice.

The “adaptation” itself was primarily updated in costuming, set design, and a few changes in musical arrangement. All the classic songs and lines remain, however, bringing an almost-50-year-old masterpiece into the 21st century nearly untouched.

John Legend’s lead as Jesus Christ was tremendous and worthy of the role. His voice was fantastic (as expected) and his performance was solid, conveying the roller coaster of experiences Jesus faced.

Similarly, Sarah Bareilles also played the part of Mary Magdalene perfectly, nailing the famous “I Don’t Know How to Love Him.” Her torn emotions over Jesus and the dilemma his followers find themselves in was heart-wrenching.

Of the three major characters, Brandon Victor Dixon as Judas Iscariot stole the show, especially in “Heaven on their Minds” and “Superstar.” Given his performance as Aaron Burr in the award-winning Hamilton, it’s no surprise that he poured his very being into portraying the tortured Judas as few could.

Broadway Star Norm Lewis, channeled his fantastic baritone into Caiaphas, sometimes adding just a hint of his iconic Phantom of the Opera. He was joined by Jin Ha, another familiar face from the stage, who complimented Lewis’ Caiaphas with his own Annas. 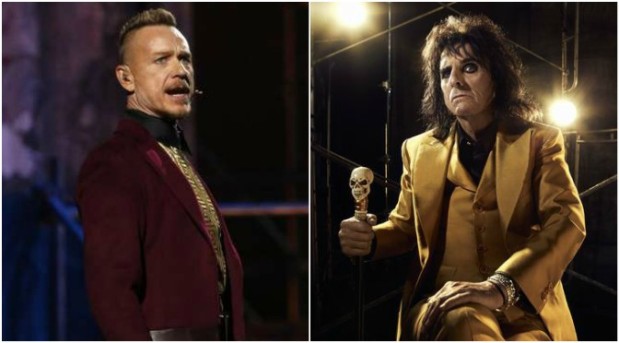 The two surprises of the night were Ben Daniels‘ Pontius Pilate and Alice Cooper’s King Herod.

Daniel’s, familiar for his leading role on The Exorcist TV series, brought an edge to Pilate I’d never seen, particularly during “Herod’s Dream.” The emotions and turmoil were tangible, and I loved his mannerisms, dress, and voice – an intensity rarely seen in the role.

Cooper was only there for the famous “Herod’s Song,” but he sold it like he does a rock concert. I loved they kept Webber’s original arrangement but allowed Cooper to add his extraordinary presence and style to the scene, bringing the audience to their feet. 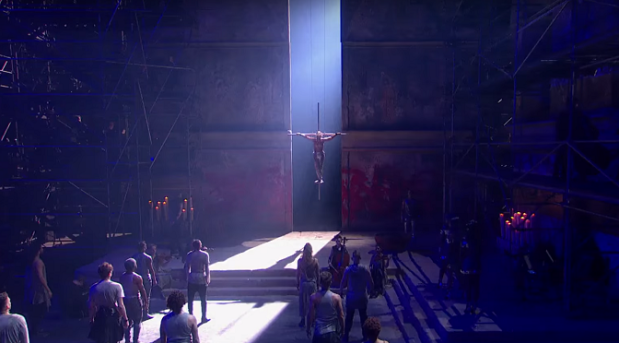 Brown’s choreography brought something new to the stage while retaining nods to the original production and film. I particularly enjoyed the complicated movement during the temple and leper scenes, as well as the exceptional ensemble performances.

Tazewell upped the ante on the costumes, and I’m not sure I can see this production without them in my mind. From Jesus’ simple, yet stylish, open white shirt and pants to the fantasy-like robes of the high priests to the rock opera garments worn by Judas’ in his final song, not a single outfit didn’t scream its character.

Ardizzone-West created a set like no other – a mix of antiquity and urbanism that was utilized in surprising ways. The final crucifixion scene was intense, and nothing like I had seen on stage before.

Now, the show wasn’t entirely without some criticism.

Although all the performers were fantastic singers, there was a difference between the pop and Broadway stars. Legend and Bareilles were terrific, but sometimes the body language wasn’t as strong as stage-trained performers like Dixon and Lewis.

I also was not fond of Legend’s arrangement of “Gethsemane” – it wasn’t bad, but it didn’t meet the high bar that Ted Neeley set in the 1973 film. Legend’s choice to avoid those high, long-powered rock wails was a bit disappointing, but I can appreciate the approach he took.

My biggest complaint, though, was the audience – they didn’t enhance the show and in fact detracted from the experience. Their constant cheering overpowered the performers, and they sounded like teenagers at the VMA’s; in fact, several times their hollering felt forced, occurring at odd times (like during a musical bridge) as if there were an “applause” sign that went on at the wrong moment. 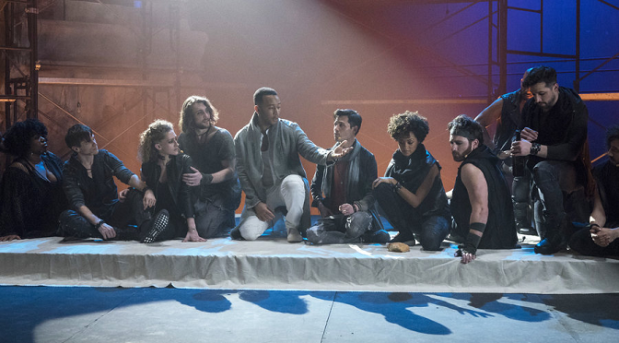 Still, even despite the audience and a couple of critiques (as a long time Webber addict), I can safely say this was one musical event worth every minute. The talented cast, the fantastic design, and the beautiful choreography made this one of the most compelling performances on broadcast television.

Whether you’re a devout Christian, a lover of theater, or simply enjoy good music and story, Jesus Christ Superstar Live in Concert deserves a place in music history.

I give this performance of Jesus Christ Superstar a stunning 4.5 flipped tables out of 5.