Marvel’s Iron Fist has probably been the most divisive of Netflix’s Marvel shows, although in different ways from the social commentary of Luke Cage. Critics hated it, audiences seemed to enjoy it, and there are all sorts of arguments over the acting, plot holes, and appropriation. One of the common complaints that show up is probably the most important for a series based on martial arts: its fights.

My issue with the fight choreography is that, for a character and theme focused on Asian culture and martial arts, it severely lacked in that department. The fight scenes weren’t anywhere as exciting as Daredevil, they were inconsistent in style and presentation, and the “acting” of the participants was haphazard at times. This series was less Yuen Woo-Ping and more Pat E. Johnson, and that was a missed opportunity.

Part of the problem was the source material, which stemmed from an era of Orientalism. Like the action films of the late-20th century, the Iron Fist comic involved a white lead using a stereotype of Asian martial arts and culture. Everything was romanticized and simplified for American palates, accuracy, and respect be damned. This generalization carried over into the fighting styles, which used aspects of Asian martial arts but were far more simple, straightforward, and brutal than the elaborate fight sequences of Eastern cinema.

When they brought Iron Fist to the screen, they had an opportunity here to return to the core of Hong Kong action rather than simply translate the outdated (and ignorant) tropes of the 70’s. Instead of following in the footsteps of Wong Fei-hung films, though, whoever oversaw Netflix’s show chose the more boring route: 80’s/90’s American action films. No Bruce Lee, Jackie Chan, or Jet Li here… instead, we were presented with weak shadows of Chuck Norris, Jean-Claude Van Damme or Steven Seagal.

This decision was a huge mistake, and it led to numerous criticisms about the fight sequences. There was no fluidity, variety, interesting styles, or back-and-forth between combatants. These fights were an American interpretation of martial arts, using the visage of kung fu to mask nothing more than straightforward brawling. Thus, the comparison to 1995’s Mortal Kombat; all the garnish and dressing of a kung fu film, but missing any decent kung fu action. Worse, at least the films from decades’ past were enjoyable with their choreography or editing, something that cannot be said for Iron Fist.

The fight choreography of Iron Fist appeared to have some problems. Some have questioned whether Brett Chan was up to the role. While his background boasts “30 years of experience of martial arts in several disciplines”, his 20 years of television and movie experience appears to be as a stunt coordinator mostly. His first position choreographing fights wasn’t until a decade later, and that was for the short-lived drama-thriller Traveler. He would later only work with fights in the occasional television show episode or B-/C-grade film, and often he was the assistant. Mr. Chan’s first role as the principal choreographer was on Netflix’s Marco Polo, a historical action-drama.

Maybe that last series explains how Mr. Chan landed such an important position in Netflix’s latest series. With such legends as Tak Sakaguchi, Corey Yuen, and Benny Urquidez, it still seems baffling to hand the reins of a martial arts-centric franchise to someone without much choreography experience. Was Philip Silvera unavailable, given all his amazing work on Daredevil? Of course, some suggest it wasn’t Mr. Chan but instead other factors: preparation, actors, and editing. 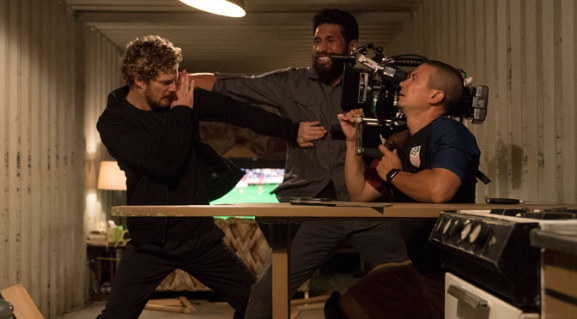 When you hear about the planning and training, you wonder what the crew was thinking. According to Finn Jones, he was often given mere minutes to learn a fight scene, and shooting them was squeezed in the wee hours of the morning in-between the rest of the show. How do you expect a 30-person fight scene to look good when you wait until 3 am, try to teach everyone the choreography in 15 minutes, and then start shooting?

Worse, although Mr. Jones claims to have had adequate training, many wonder if he was truly up to the task. PCU talked to a professional fight choreographer, on the condition of anonymity, and he had the following comment:

“I would say the choreography is actually fairly good, however the lead actors do not have the skill or presence to pull it off; so the end result is fights that don’t reach their full potential. I can see where the choreographers were going, but the actors just can’t reach that level.

It should have been better but the guy [Finn Jones] just sucks.”

Even if all those aspects had been golden, it’s possible they were ruined when the editors got ahold of the material. We don’t know which crew were responsible (there are quite a few), but the quick cuts were atrocious and one of the most glaring flaws. Also, some scenes tried to slow-down Wachowski-style, only to speed right back up, and the technique failed miserably. The entire experience was so “all over the place,” that it made any redeeming qualities of the choreography lost.

Whatever the reasons (and excuses), Iron Fist failed to present its core theme in the best way possible. The show missed the opportunity to bring classic Asian cinema to Marvel audiences, instead choosing the cliché (and ignorant) American action film. They hired a fight choreographer with questionable experience, gave unskilled actors no time to prepare before shooting, and then edited the sequences into a horrid mess.

Whoever they’ve hired for Defenders, from choreography to the cutting room floor, let’s hope they’re a lot better than Iron Fist’s crew. Otherwise, I don’t think Marvel’s Netflix series will maintain its audience through another debacle like this past one.

Is it too much to ask for martial arts scenes that are more The Protector or The Transporter… and less Gymkata?

1 Comment on Iron Fist’s Fight Scenes – Why do they pack no punch?