When I attended my first Katsucon in 2016, I was not overly impressed. There were many factors of Katsu that I encountered last year that gave a semi-bad impression of the anime convention. No, the infamous fire was not a factor since I missed it as I was commuting to and from Katsucon. There were a lot of fun things about Katsucon that did convince me to come back and I’m SOOOOO glad I did! This year at Katsucon was AMAZING! I went to Katsucon with my friend Michelle and since we did cover a lot, I’ll break down what we did into the 3-days Katsucon was officially open.

Friday was a day my friend Michelle and I decided to just explore the con and see what is happening; making our game plan as we went along. I chose not to cosplay because I wanted to experience the con not as a member of the cosplay community, but as a fangirl and an “outsider” if that is even the right term to use. As a dedicated cosplayer, in my opinion, there is a different vibe when you’re attending a convention in costume and when you’re not. Even though I’m comfortable in my cosplays, it feels more relaxing to just be in my normal clothing and being a fangirl; not worrying about props or costumes coming apart. After we went to pick up my press badge (Thanks Harry!!), we went to Artist Alley. In comparison to last year’s Katsucon, this Artist Alley felt more creative and energetic. There were a lot of unique artists and more diversity in their art, it was BEAUTIFUL! I noticed there were a few booths that showed a lot of love to brown skinned women characters, so that warmed a special place in my heart. 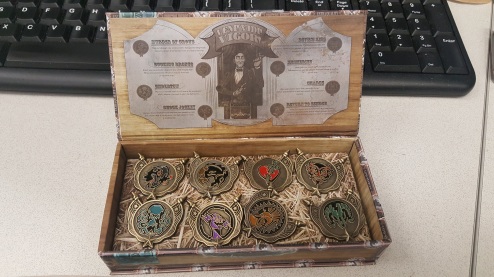 After leaving Artist Alley, I kid you not it took us at least 30 minutes to enter Merchant’s Hall. There wasn’t a huge line or delay to Merchant’s Hall that stopped us. It was the amazing cosplays we saw as we walked down the hall. The one that stuck out the most was this cosplayer who did a Reinhardt, from the video game Overwatch, cosplay in what I could only assume were real-life scale measurements! They didn’t have Reinhardt’s hammer from what I could tell but it was AMAZING! Everything about their armor was completely accurate to the video game and it caused quite a stir in the hallway.

There weren’t many panels we wanted to see or could attend, we were commuting to and from Katsucon, so we decided to just be cosparazzi’s for the day. We explored the mini convention within Katsucon, LobbyCon, and saw creative cosplayers from all skill levels. The first time I attended Katsucon last year, for some reason the air felt tense or off, but that feeling was completely absent as we explored LobbyCon. Everyone was very comfortable and there was a lot of energy in the air; everyone felt at home.

Saturday was the most exciting day for us at Katsucon. For one, I was cosplaying so I was immersing myself into the subculture and community that I love AND there were a bunch of panels we wanted to go to! Cosplaying at an event with other cosplayers is like speaking a language no one but you guys understand. It’s hard to describe the feeling when someone recognizes what character you are and you guys talk about it for a second or fan out. It’s really amazing how strangers can come together and get each other off the back; one of the many reasons why I enjoy cosplaying.

Back to Katsucon, I rarely go to the how-to style panels; I like to go to the panels about discussions and animation companies such as Funimation showing anime movies or new shows I haven’t seen. One such panel was a Funimation streaming of D.Gray-man HALLOW. At first, I thought this was a movie, but after it started I learned it was a sequel to the two seasons of D.Gray-man. This sequel is worth watching if you really enjoy D.Gray-man. The sequel is available on Crunchyroll, it is thirteen episodes long. The panel didn’t show all the episodes, but maybe 4-5 episodes. The only issue I had with this panel is the internet connection. Since the episodes had to be streamed instead of being on a DVD or downloaded to a hard drive, there were loading issues and some delays, but other than that it was a solid viewing.

Another panel that was iconic was the streaming of The Vision of Escaflowne. To me, this anime is one of the classics from the early 90s. Some of the animation techniques and storyline were trailblazers for the animation genre back in the day and paved the way for what we have now. On April 20th of last year, Escaflowne celebrated its 20th anniversary of its TV debut; in honor of its milestone, Funimation remastered and redubbed the anime (with the help of Kickstarter backers) and the new English dub was shown at Katsucon. The full season was not shown, but Part 1 which contained 4 or 5 episodes. Same problem as with the D. Gray-man panel happened. Due to internet connection, there were pauses where the episodes would stop so it could load.

The one panel I truly regret not attending the part 1 of was Homosexuality in Japanese Media. The panel was a lecture style discussion about all of the portrayals of Japanese male/male relationships. It covered the “origin” of male/male relationships from bonding experiences among men to the most current genre of male/male relationships called Boy’s Love (BL) or Yaoi, but we learned that was an outdated turn. The lecturer or teacher was very thorough in their explanations about new censorship laws that were passed in Japan that effect Boy’s Love (and other genres like ecchi) and how some manga or doujinshi artists are trying to become more aware of how male homosexual relationships actually work instead of creating potentially harmful stereotypes. We discussed the differences between BL anime series and anime series that were never categorized as BL even if they contain a BL couple; Yuri!!! on Ice was an example that was used. The panel overall was very educational and thought provoking.

Since it was the last day of Katsucon, we didn’t plan on doing a lot. That didn’t stop A LOT of cosplayers from showing up and still pulling out all the stops, the only difference was that a lot of them were dragging luggage to the designated luggage storage Katsucon had in the Gaylord. It was really an unsecure hallway with some sort of organization. It seemed odd only because across the hall on the other side of the hallway, panels were still happening so anyone could potentially grab someone’s stuff.

The only panel we attended was ran by fellow PCU writer Kurenai Kiba aka Britany. Her panel was on color theory and cosplay. Michelle and I came in a few minutes late so we missed the opening, but Britany was VERY clear in her explanations of color theory. I’m pretty sure Michelle understood a lot of what was discussed being an art major, but it was still digestible for a complete newb like me. When it came to color schemes or color choices for characters, I never really paid attention. I assumed there was a cosmetic reason, but never did it dawn on me that color choices were deliberate to portray a certain personality or archtype, so that was pretty awesome to learn. I took away how to make certain cosplays I’ve been meaning to revamp POP and become more fluid in color design. Color can be used to make a statement when it comes to cosplay and using it to your advantage can express a certain trait or feeling you want the character to portray.

Overall, this year’s Katsucon was a significant improvement to the Katsucon I saw last year. Artist Alley and the Merchant hall were so much better. The atmosphere felt a lot better and no one felt stressed out. There were more thought provoking panels rather than just panels that streamed anime series or movies I could watch at home. I learned from Katsucon that conventions held in a convention center or hotel/convention centers are VERY different. Hotels with convention centers attached have a very relaxed vibe which is great, but it also leaves room for some people to become careless and forget etiquette and common sense. There have been other hotels with convention centers attached that have strict rules for the con goers; rules such as needing to have a hotel key to stay in the room so no friends crashing over or unregistered guests. Katsucon is a really fun convention to go to and the Gaylord is a great space to have it until they outgrow the space like Otakon outgrew Baltimore. I don’t want the price of Katsucon badges to increase or for Gaylord to implement strict rules that will leave bad tastes in people’s mouths. In a nutshell, I would attend Katsucon again and I say it is very family friendly. Katsucon found a formula that worked this year and I hope they stick with it next year!

3 Comments on Color Me Impressed, Katsucon