McDonalds in the UK is currently running a Nintendo promotion, and it looks like their newest Happy Meal toy has some fan crapping their pants with laughter.

In the first week of the promotion, McDonalds Happy Meals in the UK are including a plastic toy of everyone’s favorite plumber, Mario. However, the fact that our mustachioed hero sits on an oddly-designed “chair” has some people saying that it appears as if Mario is sitting on a toilet in Goomba-land. 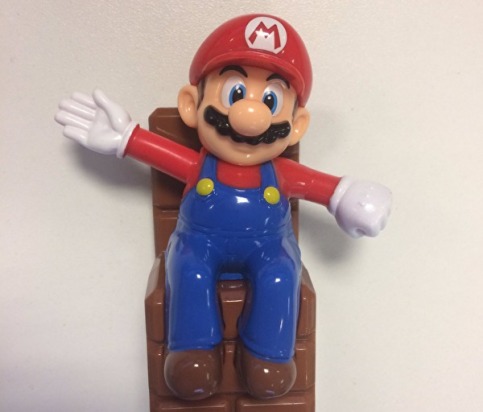 Nintendo recently circulated an image of the different Happy Meal toys, and the internet trolls responded as only the they can:
User ‘Mr_Zurkon’ said, “That’s an interesting pose for Mario. Looks like he needs a newspaper.”
This was followed up by a comment from a user called ‘Tyranexx’ who quipped, “Good thing Mario’s a plumber”.
User ‘thesewoodenideas’ wrapped it up with the more crass comment, “So that’s where the phrase ‘sh***ing bricks’ comes from!”
One user even went as far as visualizing the plumber practicing for Broadway:

I like the one of Super Mario singing show tunes on the toilet. https://t.co/jefG514y1d

The funniest part about this? It’s not even the first time there’s been “controversy” over Mario toys in Happy Meals. Back in 2015, a man in Plymouth, England bought his then 3 year-old daughter a Happy Meal, which contained another plastic Mario figure. This time, the toy featured Mario holding what Nintendo said was a “boomerang”. However, with the fact that the toy’s mechanical arm moved up & down, it appeared to some as though Mario was…having a good time with himself.

One wonders if Nintendo has spoken with the manufacturer of these toys, and WHY they seem to keep going back to them. What do you think, dear readers? Are the Mario Happy Meal toys a misstep in Nintendo’s marketing, or just another way for them to become “flush” with cash?