Wes Craven redefines terror and resurrects his career with Scream… 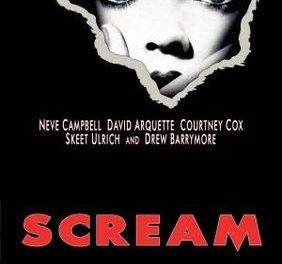 Wes Craven and Kevin Williamson’s homage to Psycho and Craven’s own movies, Scream is the self-referential horror movie that started a franchise.

Everything seemingly begins with Drew Barrymore’s adorable Casey getting the world’s worst prank call. Before too long Casey and her boyfriend, Steve, end up dead as hell and we’re off to the races.

This opening scene of the movie sets the tone for the rest of the film: cheerful with colors that are almost candy bright, but increasingly dark as the smoke from Casey’s forgotten popcorn fills the house, obscuring everything and making it impossible for her to see where the danger is coming from. As Casey’s terrorized by Ghostface her night in becomes not just her nightmare but the worst case scenario for anyone who’s ever been home alone.

One of the most quotable movies ever, Williamson’s script is snappy, hilarious and terrifying all at once. Aided by a game cast, the standouts are Rose McGowan’s Tatum and the always amazing Courteney Cox’s Gale Weathers. The ladies’ comedic timing and dry delivery never fails to hit the mark. The rest of the cast is rounded out by Skeet Ulrich’s Billy whose beautiful exterior hides a wellspring of pain and anger; Matt Lillard as proto-Joker, Stu; Jamie Kennedy’s Cassandra-like Randy and of course Neve Campbell’s psychologically scarred yet resilient Sid.

Music and character framing are essential to this movie. The phenomenal soundtrack employs classic rock to highlight the moods of the characters while Craven’s use of mirrors, windows and fisheye lensing gives you the killer’s point of view and perfectly maximizes tension.

Filled with twist and turns the movie’s cat and mouse game between unlikely allies Sidney and Gale versus Ghostface builds and builds throughout the film. Clues are dropped, from the opening scene actually, as to the identity of Ghostface and the ladies scramble to figure out not only who the killer is but who is next.

This movie takes everything you know about the teenage horror genre and flips the script on it, using your, and the characters, knowledge to subvert and celebrate the tropes you expect.

Never say “who’s there?” Don’t you watch scary movies? It’s a death wish. You might as well come out to investigate a strange noise or something.