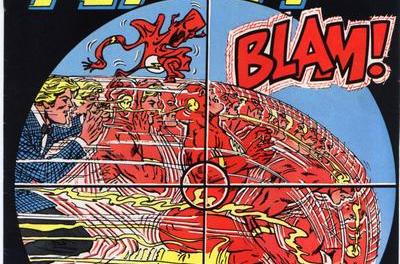 The early 80’s, a time when I, as a young kid, would get my comic fix from thrift book shops and the spinner rack at the local drug store. In those days, I was less apt to read a book consistently based on story as I was more likely to buy due to the imagery on the cover. The Flash in particular had a pretty good run of eye catching covers, and issue 322 was always a personal favorite.

Drawn by longtime Flash artist Carmine Infantino, this cover pulled me right in. A masterclass in expressing motion in still art, the main action of the cover has Barry Allen changing to The Flash as he runs, seen through the reticle of a gunsight. As the smartly dressed Allen pops his ring and retrieves his hidden suit, a single piece of text reading BLAM! adorns the cover, signaling that a shot has been fired and as fast as his forward momentum can take him, he falls to the ground. It is a simple concept that a lesser artist with a slighter grasp of kinetic motion would not be able to handle, but Infantino nails it. This period of The Flash focused heavily on the villainous antics of The Reverse Flash, who would go on to be the primary villain of the 2014 CW The Flash tv series.

I read comics for story over art personally, but the power of a good, well thought out and flawlessly executed cover can still get me to pick up any series off of the shelf to at least give it a look. I often think back to my early comic reading years, and the amount of stories that are memorable to me is eclipsed by the number of covers that have been burned into my memory. That may say something about the way my brain worked or, more likely, about a lot of the writing at the time. In either case, we have more of our favorite covers to share every weekend, so keep checking in on Weekend Coverage.