It’s almost funny that Matt Damon said near the end of the Golden Globes that his kids should be in bed.

Many have often spoken of the Golden Globes as a sloppily put together drinking party for the stars and last night it was pretty evident. When your host comes out on stage, collar unbuttoned and a  glass of beer in hand, your little ones should already be in bed.   On the flipside though, some of these awards shows can be a bit boring so a bit of alcohol can spice things up but…alas some fuckery can ensue.

If you missed (and some of you did on purpose and I can understand that) last night’s Golden Globes, here, in no particular order, are some of the moments from the show:

Some people just can’t help being an equal opportunity offender.   Gervais didn’t disappoint by going after Caitlyn Jenner and trans-gender people in less the 10 minutes in his opening monologue. Not only that, he makes fun of the accident that Jenner was involved in that killed two people and then wrapped up by going after Jeffrey Tambor and…his long balls. Hey Ricky, a note: You’re not funny and making light of a sensitive subjects and death is NOT FUNNY. 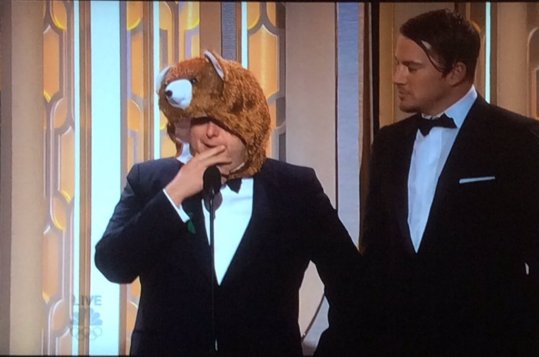 Jonah Hill came out trying to be the bear from The Revenant annnnddd..his joke fell flat as the twitterverse reminded him.

I’m pretty sure Jonah Hill is the scariest Care Bear I’ve ever seen appear at The Golden Globes.

In case you want to relive the horror, watch Jonah Hill as the bear from “The Revenant” http://huff.to/1mPeWk2

It was amazing how Jamie Foxx trolled Steve Harvey and the Miss Universe flub and then on comes Quentin Tarantino who not only attempted to drunkenly troll Straight Outta Compton but also got wrong the fact that Ennio Morricone has never won for any of his musical scores (he actually has 3 Golden Globes awards) but then he said this:

“Wow, this is really cool. Do you realize that Ennio Morricone, who, as far as I am concerned, is my favorite composer ‑‑ and when I say “favorite composer,” I don’t mean movie composer, that ghetto.”

On one hand while I am all for Jamie Foxx calling that out, another part of me says, “Jamie, you had no problem taking QT’s money while starring in Django Unchained right? I’m just sayin’.”

This moment speaks for itself.

So of course, at some point during the night, Ridley Scott won for Best Director for his comedy, The Martian.  I just have to say this about that.  It’s amazing how people still feed off of Scott’s hubris by giving him kudos when his last comedy looked like this:

I don’t care what anybody says about Taraji P. Henson.  She is probably one of the most underrated Black actresses in Hollywood and while much can be said about a Black person only winning an award for playing stereotypical roles, it is what it is.   Taraji has worked hard to get ANY recognition so at least let her have her moment.   Even a few people on twitter got on her for ‘being so ratchet’ in her acceptance that I have to say,  “Umm you’ve been watching this entire show right?  It’s FULL of ratchet.”

No seriously, what was this? Is he using John Travolta’s stylist? 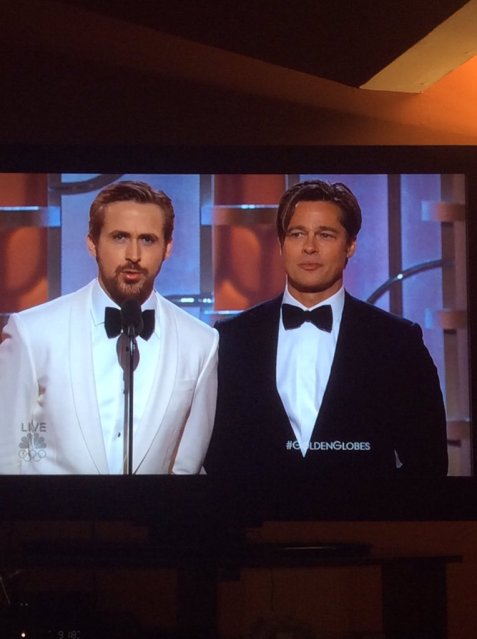 Is this really a thing?   Some people say that he was rude to Lady Gaga while others are saying that she deliberately shoved his arm.   Maybe it’s just me but I thought he was going gaga for Gaga.

If there was at least a bit of class to be found at this award ceremony, it was with Denzel and Paulette Washington.  Only your spouse will blast you kindly in public for forgetting your glasses and remind you to thank the family. it was a very good and touching speech from the 2016 Cecil B. DeMille Award Winner.

So, that’s pretty much it.  Now the question remains is, even though Leonardo DiCaprio won the Golden Globe for The Revenant, will he get the Oscar or get snubbed again?