My Aunt Jo was the spark of my love for SciFi, horror movies, comics and literature. She was a huge Science Fiction/ Horror movie fan. As a child she introduced me to all the greats. Star Trek, Star Wars, Battlestar Galactica, Six Million Dollar Man, Buck Rogers, Indiana Jones, Godzilla and giant monster movies, and even the original Black and White Horror Movie Classics with Bela Lugosi, Lon Chaney, and Lon Chaney Jr.

My parents definitely influenced me to design and create my own Cosplay costumes. When we were growing up my parents would always make our Halloween costumes. They would come up with themed ideas for my siblings and I depending on what was popular at the time. I would be Captain Hook, my brother Peter Pan and my sister Tinkerbell or the Big Bad Wolf, the Woodsman and Little Red Riding Hood. It was great and so much fun.

When I discovered Face/off I instantly feel in love with it. I thought it was amazing to see the fantastic creatures the artist would develop. I thought to myself I’d love to do that.

Then I saw the Awesome Con’s attempt to break the Guinness Book’s record I said well here my chance and with my family’s influences, a little inherited artistic, mechanical, and construction ability my Cosplay adventure began.

2. What do you do when you aren’t cosplaying? (hobbies, community service, or work)

I am an US Army Veteran who is currently bartending and in the application process for the Montgomery County Fire Department.

I participated in several charity events since I’ve been home from the Service. Including Make a Wish Foundation, Relay For Life, Lupus Walk for the Cure, and most recently Coslove. I like to give back when I can. Especially to those organizations who support children and Service Members. 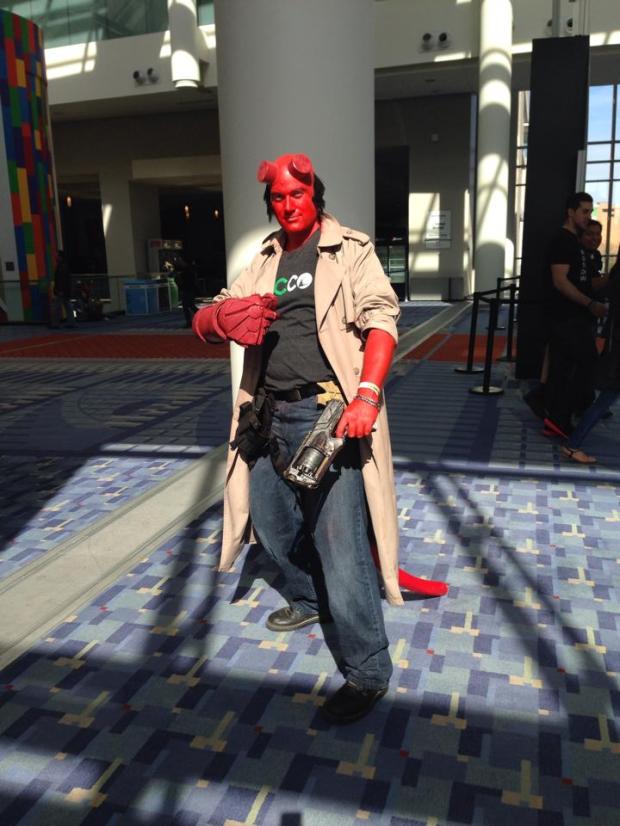 I haven’t been Cosplaying long so guess I would have to say my first costume would have been my biggest challenge. My first was for the Awesome Con World Record. No one I knew was into Cosplay so just working up the courage to do it was a challenge but I found it. I chose Hellboy because I truly enjoy the character and thought he would present interesting a challenge. I did some research in to Hellboy’s different looks and decided I liked the look from the comics the best. With my Parent’s old homemade Halloween costumes as an influence I knew I want to make my own costume from scratch and I came up with a design. I found most of the bits at costume shops and second hand stores but The Right Hand of Doom presented a little more of a problem and was definitely the most complicated part. Well actually the hand was pretty easy but the forearm was another story. For the hand I knew I wanted to use a hockey glove because it would that blocky look I needed. I went to a second hand sports store and looked through their gloves. One pair stood out above the rest and by rare chance they were just about the right color so I knew I had to have them. For the forearm it took several visits to craft and hardware stores to find the parts the right size and weight. Once I had all the parts it was amazing how easily the Hand came together.

As with all my costumes I hated my Hellboy throughout the application process. I am always saying ‘This isn’t going to work’ or ‘It’s the wrong shade’. It isn’t until I’m about ninety percent finished and it’s finally coming all together that I say ‘Okay I can work with this’. I am still never sure about a costume until I get that first smile and nod of recognition. It is gratifying when not only fellow Con goers, Cosplayers, artist, and exhibitionists appreciate your costume but when the average Joe does too. When you’re walking through the streets of DC to the Con and people in cars are yelling ‘Hey Hellboy!!’ or folks on the sidewalk asking you for a picture, you just can’t help feeling good. That you know appreciate your vision and all your hard work has paid off.

I receive a weekend pass to New York Comic Con 2014 from the folks at Valiant Comics for doing a Cosplay of Harbinger’s Torque. Also I just won my first Cosplay competition for my Hellboy and I received a weekend pass to Awesome Con 2015. So that was pretty awesome.

But without a doubt my most rewarding experience was at Tidewater Con last year as Beast. There was a young teen walking with his Mother. When she saw me she said to him ‘Look Beast’. I went over to say hi and she told me that her son was Autistic. He was overwhelmed by all of the people and commotion at that Con so they had leave. I offered to take a pic with him. She gladly accepted on his behalf. Even though he seem a little apprehensive at first but a warm Beastly smile and a hand shake brought him around. That I was able to bring him at least a moment of calm and happiness was the greatest reward.

4. What is the best advice you would give someone new to cosplaying?

Find a character that you truly enjoy. A character you identify with and that can you see a little of yourself in. It will make the costume more meaningful to you and you will naturally put the maximum effort into it.

Don’t be judgmental. Everyone is there to have good time and put there best effort into their costumes. You should appreciate their efforts. Be willing offer advice or to give freely if asked. 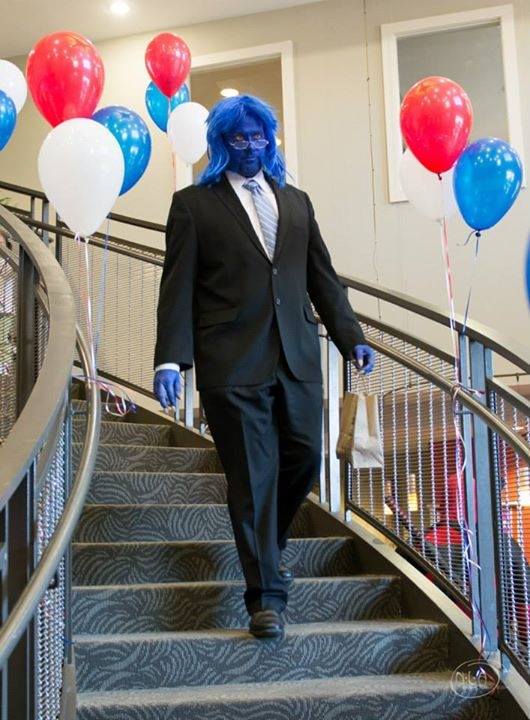