The last few…everything, has been a lot. Like, too much, levels of a lot. So, when I needed a bit of a break I wasn’t quite sure what I wanted to read. Luckily for me, Lion Forge sent out a great list of reading material in honor of Juneteenth and one of the books that caught my eye was Fast Enough: Bessie Stringfield’s First Ride.

Now, I am ashamed to admit, I had no idea who Bessie Stringfield even was, and originally thought this adorable children’s book was just to encourage little girls everywhere to not be afraid to go after their dreams and ignore those who told them they aren’t good enough. If that had been all the book was about it would be well worth the read but that is far from the case. 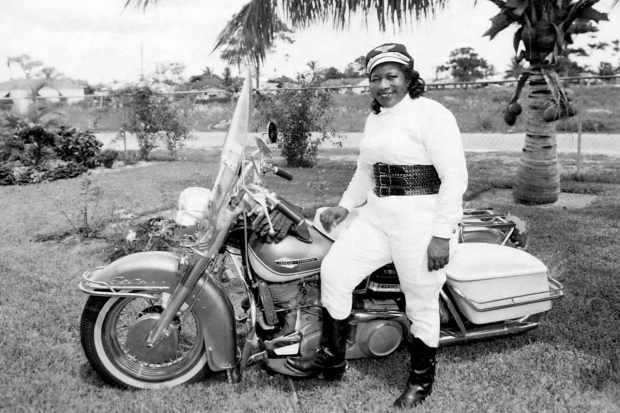 Bessie Stringfield, “The Motorcycle Queen of Miami.” ALL PHOTOS: COURTESY OF THE AMA MOTORCYCLE HALL OF FAME

In Fast Enough we get a fictionalized childhood tale about a real life lady whose story was larger than life. Bessie Stringfield was a woman whose true history we’ll never really know as she wrote her own mythology and it became even bigger than she could imagine. What facts we do know are even more insane when you realize the time period in which she grew, the early 20th century in the American South. That’s what makes her accomplishments so extraordinary: she was the first black woman to ride a motorcycle from coast to coast; a dispatch courier for the Allies in World War 2, inducted into the Motorcycle Hall of Fame and had multiple honors named after her. Basically? She was amazing and this wonderful little book, written and illustrated by Joel Christian Gill, is a perfect way to introduce your little one, or yourself, to a phenomenal Black lady that history had overlooked.

Joel Christian Gill’s writing is sweet and intelligent, never talking down to the reader (as so many children’s books often do) while his illustrations are just lovely and capture the time period that Bessie grew up in wonderfully. There are so many little details that elevate the story – watch how Bessie’s clothing changes in each scene – that add a whimsical touch to the proceedings and make it worth reading multiple times to make sure you notice everything.

I would highly recommend Fast Enough: Bessie Stringfield’s First Ride to anyone as a standalone children’s book or a jumping off point into forgotten Black history.

Five Bicycles out of Five