We’ve already mentioned the pitfalls of fence-sitting and the effects it had on Origins Game Fair.

It seems some people don’t learn these lessons, and instead double-down. They’re not just fence-sitters, remaining silent; when they finally respond, they make things worse and show how ‘apolitical’ they really are.

Such is the case with Everything Board Games (EBG), a site that discusses and reviews tabletop games.

Their reason was simple: given current events and the troubling silence with organizations like GAMA, something should be done to show solidarity. However, when they talked to leadership, they were told that the website was to focus on gaming, nothing “political.”

Dissent rose among the contributors, but those in charge silenced them. Threads were deleted, commenting turned off, and the writers couldn’t even access their previous work (let alone work on new material).

The reviewers attempted to discuss matters with the owner of the site, who not only stonewalled them but made it quite clear. EBG was to focus solely on gaming and remain completely ‘apolitical,’ and there would be no exceptions.

We’ve already clarified the problems with being ‘apolitical,’ but the situation grew worse when the owner responded. Not only did Lake Leafty (the current owner) double-down, but his official statement on the EBG site was rife with the usual ignorant, privileged, and fallacious rhetoric.

He starts by blaming the matter on “false and defamatory statement” and how “a few” contributors coordinated an “attack” by involving the gaming community. Within the same paragraph, he flagrantly admits he will censor anyone who posts things meant to “incite”.

The official statement only goes downhill from there.

“At Everything Board Games, we are committed to our core mission which is to help bring gamers and the games they’ll love together. To create a space and a community where we can hang out together and just have fun. We believe this is especially important right now as we live in a time of political and social unrest.

In order to make this happen, Everything Board Games has chosen to refrain from getting involved or advocating certain positions in regard to politics, religion, or any other hot topics.

This is why we have chosen not to make an official political statement.”

This whole passage is ridiculous on multiple levels and an example of Popper’s Paradox of Tolerance. “To create a safe space, we have to remain silent,” is like saying to make sure coronavirus goes away, we should stop testing.

Whether you like it or not, these things are happening, and they have a significant effect on BIPOC, LGBTQ+, women, etc. in the gaming community. You can’t assume everyone will push these issues to the side, while playing with those complicit (if not flagrant) in discrimination.

That is not a safe space, and to think so is delusional (at best).

The other reason why we will not make such a statement is because we believe in you—our community. To make the statement those reviewers demanded would be for us to assume that there are those in our community who are hateful racist bigots. This directly contradicts the experiences we’ve had within our community.

The naivety is intense with this paragraph and smacks of willful ignorance. No assumption is needed – the gaming community is rife with bigotry and gatekeeping.

As usual, just because you don’t see it, doesn’t mean it’s not there. You might have contributed to it yourself, as a person of privilege, with your language, behaviors, and subconscious bias.

“We at Everything Board Games are interested in just that—board games. We have no interest in virtue signaling, requiring the membership of our community to prove their moral and ideological purity, and all the other nonsense that comes with adopting that kind of mindset.

Instead, we choose to show what we stand for—what all of us stand for in the Everything Board Games community—by how we comport ourselves.

To those who who feel they cannot stay in a community that refuses to wade into politics and other social justice initiatives, we understand and we wish you the best.”

This paragraph is the smoking gun with the use of the snarl world, “virtue signaling.” All too often, that term is used to dismiss movements and stances that fight for social justice and equality.

The same remains true for charged language like “wades into politics” or suggesting “social justice initiatives” is somehow a bad thing to be involved in. They suggest less that the author is somehow apolitical or centrist, and more likely, they hold anti-SJW prejudices.

In a time when our country is divided, from the highest office in the land to the lowest keyboard warriors, solidarity for BIPOC, Black Lives Matter, and the protests is not virtue signaling. Performative or not, the public must know you are not a contributor to systemic and societal discrimination, regardless of how you view yourself.

Lake Leafty and EBG have shown precisely how not to respond to matters. Even GAMA crafted a better response, no matter how late they were (and still not taking full responsibility).

Instead, the owner decided to show his true colors by accusing his accusers, making ignorant claims about a lack of racism, and using snarl words that suggested a bias against social justice movements.

Leafty’s FB page, which includes memes and statements that mock the protests and social movement, only backs these assertions up. One public post even has comments from those with inside knowledge, highlighting everything that went wrong. 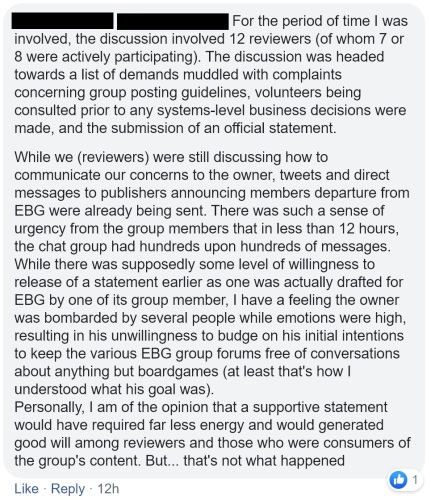 Mr. Leafty and EBG are yet another warning, and I hope others use more critical thought and humanity when considering how to respond to current events.

The days for thoughts and behavior like EBG and Mr. Leafty are over and should remain in the musty basements of the 20th century from whence they came.

UPDATE: Since EBG and Leafty released a statement on their FB page, his political leanings and stances are more obvious. Lake Leafty is not just ‘apolitical’ but anti-BLM, anti-SJW, and anti-“anything but his politics.”

A quick look at the supporters on his FB page shows a certain homogeneous group of a deplorable mindset, openly cheering on EBG’s “non-political” stance, while simultaneously decrying SJWs, BLM, leftists, etc. In the meanwhile, Leafty has made sure to publicly declare when he blocks or deletes anyone who publicly criticizes him and his supporters (“harasses” in his words).

As pointed out, these actions and words are not fence-sitting – EBG and Leafty have already decided what side of the fence they sit on.

And it’s the wrong side.