Before we start this Tabletop Tuesday, I’m going to admit that I am utterly new to Living Card Games (LCGs).

I understand the concept, the ability to create a deck of cards like Collectible Card Games (CCGs), and adapt gameplay with various expansions. Unlike CCGs, however, new sets aren’t random, and there’s no need to trade – you all receive the same cards with which to build.

I’ve been interested in LCGs, from Arkham Horror to Android: Netrunner, but haven’t started on the ‘ground floor’ until now. Suffice to say, my first LCG has proven to be a great introduction, and I’m eagerly anticipating more.

For those like me, or who want a new game of this type, I have to recommend Marvel Champions: the Card Game.

Marvel Champions is a cooperative game where players each build decks for a Hero, then work together to defeat a Villain.

If the Heroes reduce the Villain’s Hit-Points to zero, the players win. If the Villain, however, knocks them all out or completes their Main Scheme, then the players lose.

The trick is to work together and use Heroes’ strengths, as well as focus on keeping things under control. Unfortunately, the longer the game goes, the harder it gets, and the players can easily find themselves in trouble.

Does your team have what it takes to foil the enemy? Or will they end up overwhelmed, and the Villains (and their Minions) will escape?

Marvel Champions focuses on one Hero per character, each with their own identity and deck.

Identity Cards have their Alter-Ego on one side and their Hero form on the other. Both sides have Actions as well as attributes for Basic Powers: Attack (deal damage to the Villain), Thwart (reduce counters on a Scheme), Defend (reduce damage during Villain Phase), or Recovery (heal damage to the Hero).

Player Decks consist of unique cards specific to their Hero, Aspect cards based on a type of heroism (e.g., Aggression, Justice, etc.), and a variety of Basic cards. Players must use their deck to build up their Heroes and thwart the Villains’ schemes while taking the bad guy down.

Each game of Marvel Champions has a single Scenario, involving a Villain and their Main Scheme.

Villain cards are multi-stage and have attributes as well: Scheme (to increase their plot) and Attack (to dish out damage). Main Schemes develop Threat over time, and when they reach the final total, the Villain wins.

Villains also have a pre-built Encounter Deck that can be changed in numerous ways. Each deck includes Villain-specific cards, a Modular Encounter Set, and Standard (or Expert) cards.

By changing the Villains (either the character or the stages used) and the cards in the Encounter Deck, players can vary the difficulty and experience every game.

Each round of Marvel Champions is divided into two phases: Player and Villain.

During the Player Phase, each person can perform a variety of options, as many times as they can afford the cost unless the rules say otherwise. For example, Heroes may change their form once per turn as well as exhaust (tap) their Identity Card to use a Basic Power.

Hero Decks include Allies, Upgrades, Support, and Events, each with their own cost and effects. Resources are earned, and prices paid, by discarding cards from your hand.

Actions on cards may also require Resources, the character to be in a specific form (Hero or Alter-Ego), or other costs. Once a player has performed any options they can (or want), the next person takes their turn.

After every player finishes, cards may be discarded, hands are redrawn, and cards refreshed (untapped). 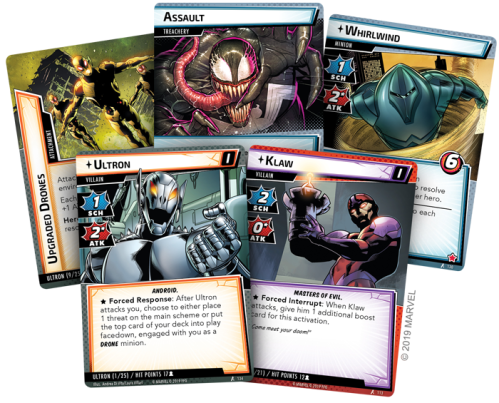 The Villain Phase allows the enemy to progress their plot, take action against the players, and cause a variety of encounters.

The Main Scheme automatically progresses in Threat every turn, and if it reaches its target number, the Villain wins. Individual events can accelerate progression rate, making gameplay harder the longer the game continues.

The Villain (and any Minions) then take actions against players depending on their current form. Alter-Egos are safe, but the enemies will build Threat on their Scheme; Heroes are attacked, taking damage to their Hit-Points unless they Defend or use an Interrupt.

The Villain Phase finishes with a random Encounter Card dealt for each player. Encounters might include Minions, Treachery events, Attachments to the Villain, or Side Schemes to defeat.

Each Encounter Deck may also activate Hero-specific events, set-up at the start of play. A Nemesis is a unique Minion that brings a separate Side Scheme, while an Obligation is an adverse event that impedes the Hero.

What I love about Marvel Champions and LCGs, is how these games are modular and variable. You can play with the pre-set decks at the lowest difficulty, or you can switch things up, from the Heroes to the Villains.

Although the basic game only comes with five Heroes and three Villains, a variety of other cards lets you spice up your game without any expansion. As you learn the basics, you can begin to customize your Hero decks to your tastes and play style.

Players can also customize their scenarios by merely varying the Villains and Modular Encounters. I also appreciate that you can solo the game, and it scales with the number of players.

All of this leads to a high replayability value, that will only grow with new Hero and Scenario packs.

While Marvel Champions is a fantastic game, it has some flaws, from being time-consuming to a lot of complex rules and questions.

The more players, the longer the game takes, as the Villain takes action for each player, and each Hero resolves an Encounter Card. At four players, we experienced notable downtime, and turns were sometimes very long (depending on the Encounters).

Also annoying was that knocked out Heroes are simply out of the game. Marvel Champions has no mechanic for bringing people back, which can lead to boredom or poor sports.

More significantly was the complexity of the rules, which often required knowledge of synergy, which may be an obstacle for novice players. Worse, even for experienced gamers, the number of questions we had regarding the rules was astounding.

We missed a lot of rules that weren’t spelled out and had to turn to forums and unofficial FAQs for clarification. Although we loved the game, and are more prepared for the future, this game proved frustrating for non-gamers and casual players.

I’m glad that Marvel Champions was my first introduction to LCGs, as it mixed both a beloved franchise with some excellent gameplay. Given this is a Fantasy Flight Games production, who I’ve lauded numerous times in the past, it only makes sense that I’d enjoy their latest.

A cooperative format, as well as solo-play, makes this game an excellent choice for gaming families or those with limited play opportunities. Even though these are cards, rather than models, the game still retains that excitement of the superhero genre.

The main downside is the complexity of rules (intended for teenagers or older) and a need for dedicated play-time (particularly for maximum players). Although a great introduction to LCGs, we had to coach more casual and newer players, and some were ready to give up.

If you’re willing to give it a chance, or already familiar with LCGs and similar card games, I think this is probably one of the best choices. Excelsior!

I give Marvel Champions a heroic 4.5 Avengers out of 5.