In a culture that’s slowly moving past the zombie-craze, you wouldn’t think we’d need an RPG to explore the zombie apocalypse. There are still films, shows, comics, novels, and games, but many are coming to a close (or already have ended).

In the TTRPG industry, we have no small amount of good zombie games; All Flesh Must Be Eaten, FFG’s End of the World series, Red Markets, etc. Each approaches the topic in its own ways, and they’re a lot of fun.

Despite this, one thing I’ve been yearning for is that interpersonal drama found in series like The Walking Dead or World War Z (the novel, not the movie). I love the concept of exploring life after the apocalypse in a “secure” encampment, dealing with threats both living and dead, and the inevitable loss of life (or mind).

That’s why we gave Magpie Games’ Zombie World a try, as the very premise in the box (and artwork) mirrored the stories of Kirkman and Brooks.

Zombie World is a new take on the Powered by the Apocalypse (PbtA) games Magpie has become famous for, choosing to use laminated cards and playmats instead of dice and playbooks. The system is streamlined but still follows the PbtA basics: cooperative world-building, broad Moves that cover general actions (or a whole plan), and a “yes, AND – no, BUT” approach to results.

The setting is generic, open to interpretation as the players build their Enclave. While it provides initial cards for two basic choices (prison or hospital), there are expansions with further possibilities, and the GM could quickly come up with their own. 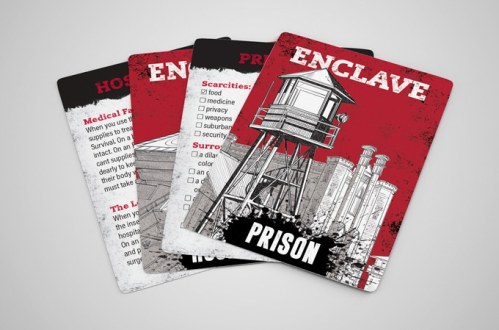 As the Enclave is the center of the game, Zombie World starts with a round-table process allowing the players to design it. Each Enclave card lists two guaranteed aspects and further options; the players pass the card around checking off more.

By the time they’re done they’ll have an Enclave with multiple Scarcities, Advantages, Surroundings, and Population, that they’ve discussed and named. Along with the GM, this helps them figure out the general setting, from where it’s set (real-world or fictional) to geography.

Unlike other Magpie games, Zombie World doesn’t use playbooks or “splats.” Characters are made from scratch with a mix of stat assignment and randomized aspects, but still broadly open to interpretation.

Each player draws a series of Identity Cards: a Past (representing who they were), a Present (their current role or behavior), and a Trauma (a personality quirk). The Past and Trauma cards remain hidden; these will come up in-game and provide bonuses once you’ve revealed who you really are to the others.

Afterward, players assign numbers (one low, two medium, and one high) to four Stats: Savagery (physical violence), Soul (empathy and interpersonal skills), Steel (willpower and psychological control), and Survival (ingenuity and general skills). These will determine how easily you perform different Moves, just like any other Stat in PbtA games.

Although the randomness of the Identity Cards may seem restrictive, you can still fit them together into a coherent (and compelling) character you want to play. Some players use their Stats to play to their aspects while others go in opposite directions, but everything is open to interpretation in the end.

Once Enclave and Characters are done, it’s time to develop relationships, reminiscent of Urban Shadows and Masks. Adjacent players are dealt a question about their Relationship (and possibly the NPCs); these might fill in backgrounds, give story hooks, or flesh out social dynamics.

Players also receive a random Ally, a member of the Enclave that the player knows they can trust and ask for help. Allies have names, previous careers, skills, and equipment, providing hints as to how they can help. 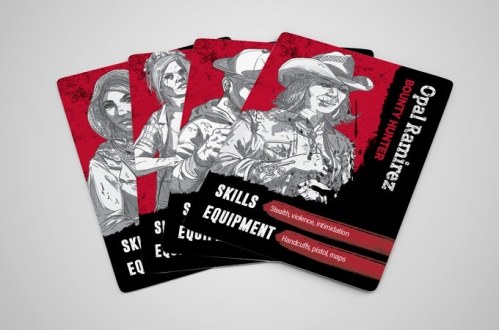 Like many PbtA games, the rest of the set-up is mostly roleplaying and player-created. Appearance and demeanor, fine details about the surroundings, and even equipment aren’t necessary; Zombie World is all about the story rather than simulation.

Once everyone is ready, the GM draws a Fate card, which has a plot hook that’s occurred after “Time Passes.” These can range from an Advantage breaking to a social dispute, but this is the primary conflict of the session.

Zombie World itself plays like most PbtA games: players roleplay in response to the plot points and perform Moves when they try something important. The game develops organically, with the GM primarily in a reactive role, portraying the NPCs, situations, and consequences in response to the players (and action results).

One difference compared to standard PbtA is that there are no dice; everything is drawn from an 11-card Survivor Deck. You draw cards equal to the Stat, plus or minus any bonuses or penalties, and then pick the best result.

Another change is the inclusion of Zombie Moves, a new set of actions for dealing with the undead. Whereas the main Moves are for interacting with other people and general problems, the mood changes when you’re encountering a bunch of walkers.

Zombie Moves are meant for swarms, not a few undead (quickly dispatched through roleplay). These actions reflect the chaos when you open that door that says “Dead Inside” or fall from the fire escape into an infested alleyway.

You might try to fight, flee, or fool them, and one person may take point to lead the others. Either way, the risks increase as you might end up in a worse situation or even be bitten. 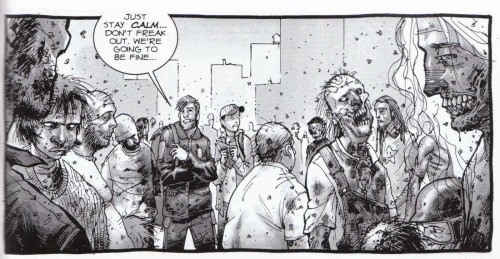 Speaking of being bitten or other injuries, Zombie World does not keep track of health. Instead, it uses other consequences: a Stress track, a Move called Suffer Serious Harm, and the Bite Deck.

Stress represents how well you’re handling the apocalypse and your mental stability, and it regularly fills (or clears). If you fill all your boxes, you gain a new Trauma; upon earning their fourth Trauma, the character is “broken” and becomes an NPC (and possible antagonist).

As for physical harm, damage is often reflected in roleplay or when someone suffers extreme injury, probably from the results of a Move. When that happens, the player draws cards from the deck, with the results ranging from surviving with a scar to having permanent damage to outright dying (at some point).

Similarly, Zombie Moves might result in a draw from the Bite Deck, a set of cards that includes positive (and negative) consequences as well as a single Bite card. If you’re unlucky enough to draw it, your character is doomed – they will eventually succumb or have to be put down.

One significant aspect of the game is that death or being bitten doesn’t mean you’re immediately out of the game. Instead, the player and GM can have the character go out on their own terms.

Maybe the grievously wounded sacrifices themselves for the good of the other survivors while the bitten finishes out one last goodbye with everybody before a merciful (and permanent) death. Once more, drama reigns supreme, and the final curtain call is best saved for the end (or climax) of the session.

I also love that Zombie World quickly encourages introducing new characters to replace the fallen. As time has passed between each session, players might roleplay a supporting NPC, background character, or even add new survivors to the Enclave.

Given there’s no mechanical progression for characters, it’s easy to start over with someone brand new and death is a regular (and accepted) possibility. All of these factors contribute to an exciting game where anyone can die, and the cast continually shifts.

Although most PbtA games range on the “softer” side for complexity and rules, Zombie World is comparatively easy to pick up, learn, and play. Without playbook-specific moves, and with randomly generated hooks, you can easily play a session in a couple of hours.

This game is excellent for novices; one game included a person who had only played a single TTRPG decades ago and was apprehensive about them. Despite being somewhat intimidated at first, they quickly picked up the play and thoroughly enjoyed themselves.

Another fun aspect of the game is how it can be played with small or large groups. Zombie World works just as well with two PCs as it does with nine, requiring only a few minor tweaks (included in the rulebook) to accommodate larger crews.

With the generic (and adaptable) setting and the guidelines during set-up, I’d even recommend this game as a “travel” RPG. The use of laminated cards and small playmats, along with an erasable marker (included) means minimal footprint and GM materials.

The only critique is that, given the erasable marker, you might need to take a photo of the playmats; once you put them away, they tend to smear or erase. PDF copies of the playmats, however, might work better for carrying over between sessions.

Zombie World meets everything I wanted in a game set in the zombie apocalypse. Episodic sessions revolving around survival and interpersonal drama, guidelines that push the plot along at a nice pace, and intense (and deadly) encounters when the undead are involved.

Not to mention the game is pint-sized, great for small or large groups, and easy to learn for even the newest gamer. With some more sessions, this one might also top some of my previous favorite zombie-based TTRPGs.

If you’re looking for that Walking Dead-style flavor of zombie game, where it’s all about the people and the apocalypse is simply the backdrop, then this is the RPG for you.

I give Zombie World a triumphant 5 survivors out of 5.