I’ve loved Godzilla ever since I was a small child watching reruns of badly-dubbed kaiju films on Sunday afternoons. I didn’t care about the special effects or the ridiculous plots – it was all about watching that rubber suit throw another one into explosive-filled, wooden buildings.

I’ve been with everyone’s favorite monster from the 1954 original through the latest movie and anime; I stuck with it through the best (and worst) of the Shōwa period, loved the over-the-top nature of Final Wars, and even tolerated abominations like the American “Zilla.”

When U.S. filmmakers tried once more to copy the success of Toho with 2014’s Godzilla, I was there on opening night. I came out a little disappointed, mostly criticizing the acting or direction, but overall satisfied. Unlike many critics, I realized that the limited screen presence and fights were a direct homage to the original.

There was no doubt I was psyched to see Godzilla: King of the Monsters, even though I was still reeling from how great Shin Godzilla was several years prior. I knew it might not be a Toho masterpiece, but I had high hopes for Godzilla: KotM, given the return of all the favorite kaiju.

Unfortunately, those hopes were marred by the usual mixed bag, which appears to be par for the course in American Godzilla movies.

I want to be clear that the concept is solid, and one straight out of the Godzilla playbook. Although the core plot points are different, this movie is essentially Ghidorah, the Three-Headed Monster with a touch of Destroy All Monsters.

The Earth (specifically the United States) is still reeling from the events five years prior, and the American Government is holding Monarch responsible for the return of “the Titans” and the resultant destruction. While the U.S. wishes to take control of Monarch’s knowledge and resources to destroy the creatures, Dr. Serizawa (Ken Watanabe) argues that not all the Titans are dangerous and that they’re a vital force of balance on the planet.

In the meantime, the side plot focuses on the Russell family, Mark (Kyle Chandler), Emma (Vera Farmiga), and their daughter, Madison (Mille Bobby Brown), survivors of the destruction in San Francisco. Mark and Emma both worked for Monarch, although after a tragedy during the 2014 incident, Mark left and became distant from his family.

When a rogue group begins releasing monsters long monitored, and held in stasis, by Monarch, the Russells are at the heart of the situation. Serizawa and his scientists, along with the military forces of Monarch, must help stop the destruction of many awake creatures, while advocating for the use of Godzilla as the planet’s only hope.

Despite much more monster action than its predecessor, the main problems with Godzilla: KotM fall along the same lines two different movies in one.

On the one hand, you have the story of the kaiju and their effect on the world around them. Godzilla, Rodan, Mothra, and Ghidorah all play their parts, as do the people fleeing and the forces of Monarch.

This tale, although cliché, is the best aspect and probably what will draw many people who disliked the 2014 film. The sheer amount of monster battles makes up over a third of the film, and they are epic every time.

The other side to the movie is the drama of the humans, whether it’s the dysfunctional Russell family or the various heads of Monarch. These scenes focus on the interpersonal relationships and the philosophical debates over a world where man is no longer the apex.

Unfortunately, this aspect is even weaker than the predecessor film, with characters that you care about even less and far too much exposition. Although the monsters receive almost triple the time from before, it’s not enough to counter long, boring scenes while they debate folklore, tactics, and each other’s motivations. 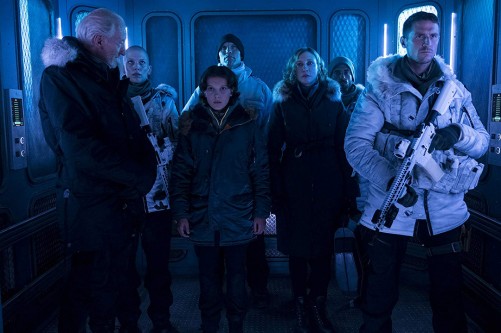 Given the fantastic cast, I must blame the weak human plots on both the writers and director.

Vera Farmiga and Millie Bobby Brown, both top performers, can’t hide their dialed-in emotions no matter how many tears or curse words they use. Worse than Aaron Taylor-Johnson’s blank gaze in the last film, everything feels forced and fake from these two.

Also, the motivations and behavior for mother and daughter are nonsensical and inconsistent at times. Brown’s Madison is calmly smirking as she tries to control a device as Godzilla and Ghidorah battle within feet of her, but then is screaming and crying minutes later despite the action now having moved away.

Then you have the variety of supporting cast, who all seem there solely to provide comedic quips and sage wisdom. Each joke (many seen in the trailer) falls as flat as the actors’ performances and feels like everyone is just going through the motions.

I’m not sure whether Michael Dougherty and Zach Shields were out of their element – they’re not terrible at directing or screenwriting, but their resume is small. I enjoyed Krampus, but a dark comedy-horror with is far different from a kaiju film, and I think their lack of experience shows. 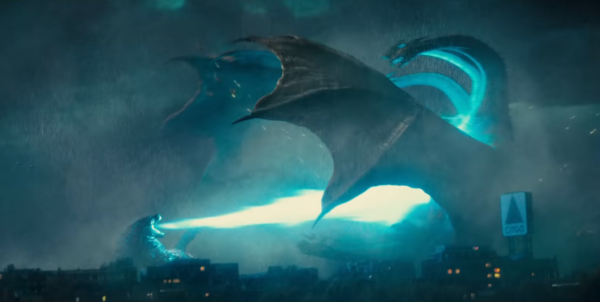 On a high point, the monsters were all fantastic and everything we’d like to see in an updated film. They’re massive, destructive, and “beautiful” (in their way). They brought back many fond memories, and my 7-year-old son, who was bored and fidgeting during all the drama scenes, was glued whenever they were on the screen.

Another aspect that many casual (or non-) Godzilla fans might not have noticed is the sheer amount of Easter eggs. So many references are littered throughout, and it was great to see so many nods to the original films.

Unfortunately, once more, the choices made by the writing, direction, and editing end up detracting from what would have amounted to a Toho monster-fest. The trailer mentions 17 known “Titans,” but only the big four are given much screen time; the rest are relegated to brief mentions, shots, and a minor sequence during the finale.

To lure in people looking for monster action, but then only provide the four they name, is some deceptive marketing. If they’d even had a minor battle involving some of the other kaiju, like Godzilla: Final Wars, then I think I would have been satisfied. 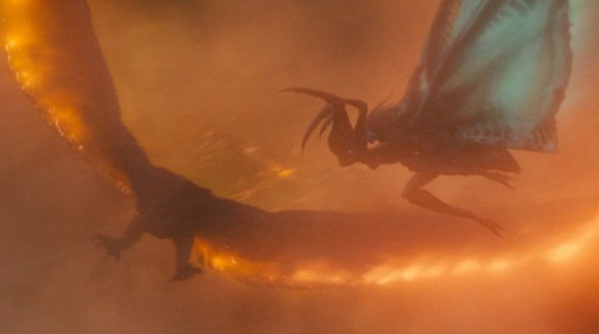 Godzilla: King of the Monsters is far from a bad Godzilla film, but it could have been so much better.

They gave much more screen time and epic battles for the creatures, and for that I’m grateful; if that’s what you came for, you won’t be disappointed. Sadly, they still decided to focus far too much on the “human” element, like its predecessor, and it took away valuable monster time.

Worse, despite the sheer talent they had at their disposal, the characters behaved erratically, and the performances (and jokes) fell flat. If you’re going to make a monster film primarily about the people, then they need to feel real and keep you intrigued.

I hope that the upcoming Godzilla vs. Kong, who is name-dropped throughout this film, learns a lesson from these past two. Otherwise, it may be time for Toho to take back the rights once more, lest we Americans ruin things (like we did in 1998).

One final warning: there’s a post-credits scene that may hint at the plot of the upcoming movie. I have theories what it means, but I won’t share them here because of spoilers.

I give Godzilla: King of the Monsters an ineffective 3.5 oxygen destroyers out of 5.

Thanks to Allied Global Marketing for the screening passes.

4 Comments on Movie Brew – Godzilla: King of the Monsters