I talked before about themed strategy games when I discussed Wu Wei. While I enjoyed the replayability of that game and the many paths to victory, one critique was the sheer amount of setup.

For a game to be more appropriate for “family night,” you need a little less time spent preparing it and more playing. That’s how I ended up bringing a game from WizKids to the table with my wife and son. Enter Bumúntú.

Based on the Bakongo culture of Central Africa, Bumúntú is a strategy game where each player portrays a tribal leader following the guidance of the animals. Once the game ends, the wisest leader earns the most favor from the animals of the Congo and brings prosperity to their people. 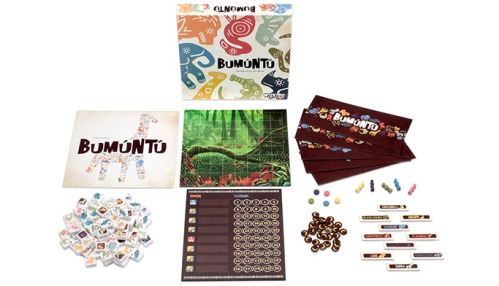 Bumúntú is a strategic movement and collection game, where players compete to gather tiles of individual animals and sub-types. Each animal is worth a different amount and specific tiles may also grant additional points during the endgame.

The trick to the game is that movement is dependent on the tile you’re on when your turn begins. Each animal provides different movement — from the quick diagonals of the chimpanzees to the charge of the lion (and its roar that moves others with it).

Players can move in any direction (horizontal, vertical, and diagonal) and may even change direction in the middle of their movement (unless their animal says otherwise). Each animal, however, requires you to move a different amount of spaces and some are stricter on what they require; if you can’t fulfill the movement you can’t move, and you don’t gain the tile.

Thus, each turn you not only need to think not just about how you’re moving (given the animal you’re on) but also what tile you want to land on next. Each end move sets you up for what tile and movement you’ll have the following turn, requiring you to think many rounds ahead. 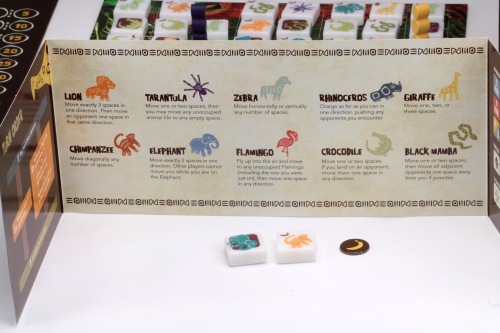 At its core, Bumúntú is an attempt to gather tiles of specific animal types based on their worth on the scoreboard. The beginning of each game randomizes what each tile is worth, and you don’t want to be caught focusing on animals that are worth very little.

The trick to the game is that the scoring chart isn’t static, as it can change as people collect Advanced tiles. Each time they do, they may shift points on the scoreboard, moving something up and another down; with enough tiles, a player may lower the worth of opponents’ collections while vaulting some mediocre animal to higher favor.

Of course, Advanced tiles are a double-edged sword as: 1) There are only so many and 2) They work as a countdown timer. Once the last Advanced tile is taken, and the scoreboard adjusted, the game ends, and scoring begins; spend too much time pushing the game toward its finale, rather than gathering animals, and you may not have the tiles you need to score. 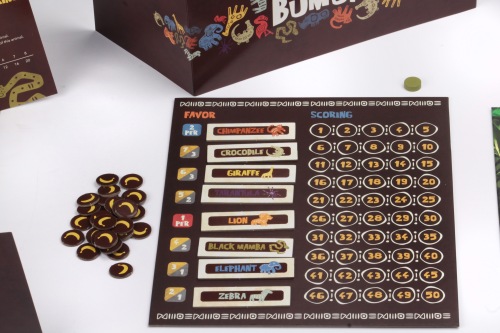 Bumúntú also has several additional rules and paths to victory that significantly add to the strategic value.

For one, most animal tiles have a sub-type with a food symbol; once you collect the tile, you also receive a food token. On your turn, before you begin to move, you may spend the tokens to move one space, allowing you to set up a better choice in tile or movement for that turn.

Other tiles have Nkisi (spiritual objects) or Yowa (the sign of the cosmos) symbols, which net further points depending on how many you gather. We played several games where a player was behind significantly, but by focusing on these symbols (rather than specific animals), they gained a considerable boost and pulled off a win from behind.

Bumúntú also allows players to use animal abilities to interfere with their opponents, as some can do anything from push people away to shifting tiles across the board. For example, they might use a rhino or black mamba to push someone into an empty jungle space; if you start on an empty spot, you must waste your turn moving a single place (or spend food tokens to move at the start).

I also enjoyed how the game provides a player screen for each person, behind which they hide what tiles they’ve collected and their food tokens. This obstacle requires a lot more memory and thought as you try to remember who has what, and which tiles they’re trying to capture. 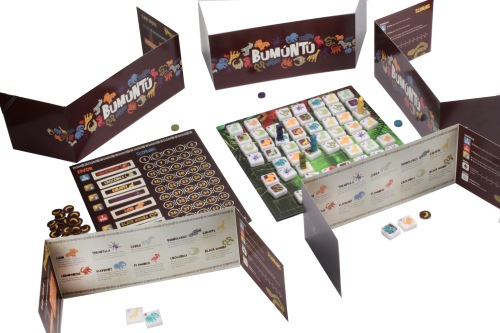 Although deceptively simple-looking, like many games, Bumúntú hides a lot of strategy under its demeanor. Each game is randomized between which eight animals (out of 10 choices) are on the board, and how much they’re initially worth, creating a lot of replayability.

My biggest complaints were the general set-up and how the components sat on the board.

Although much more straightforward than Wu Wei, or even Santorini, there are still 64 tiles to set up as well as eight animal tokens and a pile of 32 food tokens. Also, you need to sort the tiles first (so you can pick which animals you’re using) and then randomize them, which adds an unnecessary step.

Even more annoying, the playing board and separate scoreboard are thin with no recesses in them, like Wu Wei. Tiles were constantly sliding askew from their squares while an accidental bump can send even the scoring chart off kilter.

The lack of anything to keep the components on the board means you must be careful. Anyone without fine motor control or who must reach across the table may inadvertently bump pieces and delay the game. 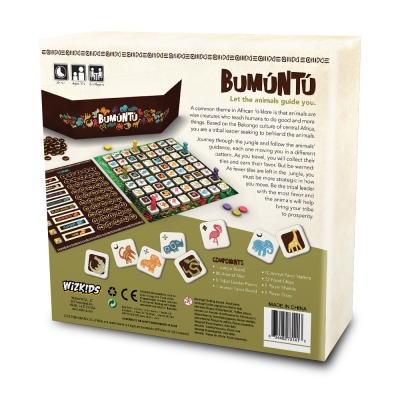 Bumúntú proves to be deceptively strategic for such a simple-looking game. If you do have more than two adult players, however, be warned that it may take longer, as we found analysis paralysis became quite common. Despite this aspect, most games finished within reasonable times, making this game perfect for children and adults alike. Bumúntú might not attract as many “hardcore” gamers, but it’s a good game for gaming groups and family nights.

Prepare yourself for a journey and listen to the wisdom of the animals. Can you choose the wisest path and earn the most favor for your village?

I give Bumúntú a favorable 4 nkisi out of 5.