One of the main reasons that classic games remain popular, is because they are simplistic, yet they offer good replayability and near-infinite strategies. From Go and Chess to modern creations like Santorini, sometimes the best games focus on tactics rather than complexity or flashiness.

In an age of Euro-games, thematics, and Kickstarters, however, sometimes its hard to find a middle ground. Even more difficult is to find something that blends classic gaming with contemporary style.

In Wu Wei, players move students through China to master the five animal forms of kung fu so that they may return home and pass on their martial arts lineage. Along the way, seasons will change, the chi of the land will shift, and other students may block their way; whoever returns to the start with their master first wins!

At its core, the game is simple: players move up to three spaces, resolve the spot they land on, and the next player activates. This simplicity hides notable strategy, however, as each resolution can change how the board works and change the next player’s opportunities.

For starters, Wu Wei has different locations you can land on, each with their own limitations and effect.

Terrain is the simplest and, as octagons, provide the most flexible routes to other locations with eight different entries and exits. Movement, however, is limited by the current Season; if the Season matches a Terrain type, that location is blocked, and you must choose another path.

Towns, Palaces, and Temples are square locations (meaning only four entry/exits) and match the five types of Chi: air, fire, metal, water, and wood. Ending your movement provides Chi of its kind, a resource spent both on your turn (for extra abilities) or to bid after the passing of the four Seasons (to determine who goes first next “year”).

Each of those three also provides another effect beyond providing Chi. When you end your movement in a Town, you change the active element, which is crucial as you can only spend Chi of that type (until changed again).

Palaces provide the ability to change the landscape by building a Wall; these impassable locations sit upon Terrain and require a unique ability to pass through (or powerful Chi to knock down). Careful in your selection, however, as once a Palace is used it’s inactive until another is activated.

Temples are the primary means through which Students train, as each contains a Master of a specific lineage and element; ending your turn there grants you the matching Animal Card and progresses you toward becoming a Student-Master. Each time a player performs this act, however, the Seasons progress, changing the paths through the Terrain and moving the year closer to the end.

Once all four Seasons are over, and everyone has taken a turn, a Gathering occurs during which the players bid to become the first player for the next “year.” Each player secretly offers Chi, and the highest bidder chooses who goes first; the bid chi is then divided among opponents, and the game continues.

The game ends once a Student has become a Student-Master (earned all five Animal Cards) and both they, and their Master, have returned to the center octagon (the starting point). Whoever finishes their training and returns both characters first, passes on their lineage and wins.

The first is the Yin-Yang tiles, which remain static during the Initiate level but now control which characters can move; ending a turn there does nothing but leaving causes them to change to their opposite.

If the board is dominated by Yin (black), then only Masters can move while Yang (white) dominant only allows Students; a balanced board will enable players to choose any character, and they can even split their movement between the types.

Another difference is the Masters, which can now move throughout the board (and cause effects from locations as usual) and automatically cultivate Chi of their type. You no longer need to visit Temples, although any Masters that don’t belong to a player remain in those spots.

The critical aspect is that you can now bring your Master to your Student (for easy training); your opponent, however, can spend time moving their Master away (to avoid passing on their knowledge). Of course, if you catch up with their Master, they have no choice but to pass on their discipline to such a tenacious pupil.

The hardest difficulty is Emperor level, which requires three players minimum, one of whom will play as the Emperor (or Empress) as well as their Generals.

The other players continue their attempt to master the forms and pass on their lineage as usual but are now competing against a player who wishes to unify China. The Emperor player does this by building four Towers at the corners of the board, growing their armies in the process.

The Emperor affects the board far more than other players; they build Walls at the start of the game, through Temples as usual, and by merely ending on a Terrain location. Also, both the Emperor/Empress and their Generals can move through, and end on, Walls.

Generals begin limited by most Terrain, but the Emperor/Empress can change Terrain into Fields, making it easier for their armies to move. This action not only allows Generals to reach the four corners and build towers but also to land on Students and Masters; Generals can then conscript their opponents’ characters, setting them back in their progress.

Wu Wei was designed by Justin Waggle, a martial artist and student of Taoist philosophy, and it shows in the elegant design.

Despite the trappings, the primary goals and rules are simple; yet, there are so many factors that can change that players must learn to adapt each time they begin their turn. Our gameplay found elements of Go, Xiangqi, or Shogi woven into the rules; thinking ahead while adapting to changes in the board became important and brought the experience to new heights.

The game itself is gorgeous with a fantastic double-layered board with cut-outs so that many of its pieces (like the square markers) sit into recesses. While some parts are made of cardboard, much is painted wood, which only adds to the experience and ambiance.

Similarly, the small plastic Chi markers (and linen bags for them) and the laminated dice (that represent the characters) have gorgeous labeling on them. We did notice a few flaws, such as bubbling on the labels, but overall our copy made this game stand out against the usual cardboard and plastic meeples you find in most boxes. 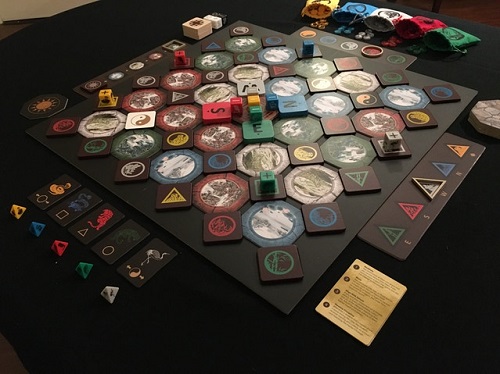 One major complaint is that, for such a “simple” and classical game, Wu Wei takes an inordinate amount of set-up time. The beginning board alone consists of 63 tiles, many of which are put into piles to randomize each game; that doesn’t include the three tracker boards, two characters for each player, five Lineage markers and stacks of cards, five bags of Chi tokens, and various markers or trackers.

For a game that flows quickly, even when you take time to strategize, the percent of game time spent setting it up is excessive. I will praise the designers for making it easy to clean up, as the plastic insert has symbols showing what components go into which sections.

I also warn that the rulebook is a bit confusing in its layout and may be intimidating (especially when compounded by the set-up process). For example, the authors recommend you start at Initiate level but put that part of the instructions at the end, after the Master and Emperor rules.

Waggle has also put sidebars full of philosophical and martial arts quotations into the book, as well as an entire page dedicated to recommended reading on those topics. Unfortunately, none of this contributes to understanding the game; like examples of play or FAQs would, and it only distracts from reading comprehension.

Despite these critiques, Wu Wei proves to be a fantastic experience and one we played many times on multiple levels of difficulty. The randomization of each board combined with numerous strategies created unique paths to winning each time.

If Mr. Waggle was hoping to express Taoism and Zen through a board game, he certainly succeeded. If it weren’t for the long set-up (and table footprint), we’d even suggest that Wu Wei exceeds Santorini in its infinite approaches and fun.

For those that love abstract strategy, Asian-themed games, or even philosophy and martial arts, then Wu Wei will probably be an excellent addition to your collection. May you, and your games, have endless happiness and longevity.

We give Wu Wei a contemplative 4.5 moments of Zen out of 5.

(We’d like to thank the staff of Gritty Goblin Games in Fulton for providing us with the space to playtest the game.)