I Want to Eat Your Pancreas was, without a doubt, a beautiful portrayal of two seriously contrasting personalities and how they became close with each other over the most drastic of circumstances.

When I went to see this in theaters, I was so glad that they started off with a “making of” review with the creators and voice actors. I was doing my best not to curl up into a ball and start sobbing before it even started. 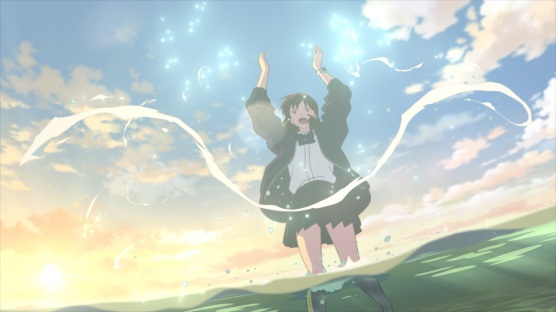 I appreciate the effort and emotion that the team gave into making this film. The connection the voice actors felt for their characters even brought them to tears as they spoke and thanked everyone for coming to the viewing. The Japanese and English teams had plenty to say about the project and how much it meant to them to be a part of bringing this film to life. The detail in the artwork alone speaks volumes! The team developed such care and love for the story that was being told and the message that it was sending to their audiences, both for those who had read the novel and those that hadn’t.

Based on the award-winning novel by Yoru Sumino

She said, “I want to eat your pancreas.”

Spring time in April, and the last of the cherry blossoms are still in bloom. [An] aloof bookworm with no interest in others comes across a book in a hospital waiting room. Handwritten on the cover are the words: “Living with Dying.” He soon discovers that it is a diary kept by his very popular and genuinely cheerful classmate, Sakura Yamauchi, who reveals to him that she is secretly suffering from a pancreatic illness and only has a limited time left. It is at this moment that she gains just one more person to share her secret… As her free spirit and unpredictable actions throw him for a loop, his heart begins to change. ~Fathom Events and The Official I Want to Eat Your Pancreas Website

The relationship that develops between Sakura and ‘I’/‘Me’ starts off very strange and awkward, but watching these two interact is both charming and saddening.

He is a closed-off person, uninterested in creating relationships with people. On the other hand, Sakura is rambunctious and always in the middle of the action. Her openness and interest in him is done in such a way that it’s like watching a wave sloshing over a hole in the sand and filling it little by little, until it creates its own little tide pool ecosystem.

When Sakura entered his life I felt that she saw him as an anchor for herself, since he is someone who’s detached from the rest of the world. She can be herself around him, although he knows about her illness – a secret that only her family knows. 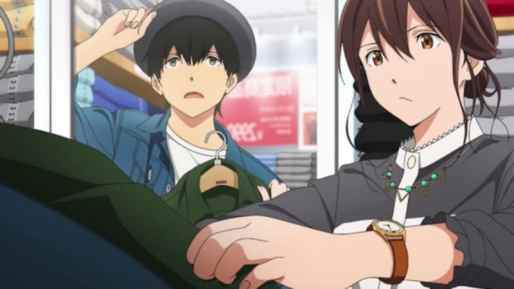 With him being so emotionally disconnected from the world, she doesn’t have to worry about him treating her any differently. She doesn’t even tell her best friend, Kyoko, because she just wants to be able to enjoy the remaining time she has left instead of having the constant thought of her death stuck in everyone’s mind. Kyoko really cares for Sakura and is extremely protective of her. There were so many moments in the film that I wished Kyoko would find out sooner because she was feeling so jealous of ‘I’/‘Me’ for spending so much time with Sakura, and misunderstanding the situation.

‘I’/‘Me’ slowly opens up to the world around him after Sakura sweeps him up into her whirlwind of bucket list adventures. He unwittingly begins to fall for Sakura, and she for him. Through various instances and situations, some innocent, and some not so much, their feelings for each other move past simple friendship, and they become more important to each other – which, as the viewer, knowing the inevitability of Sakura’s death makes it that much more bittersweet to watch.

I got a lot of Your Lie in April vibes while watching this. The thing that solidifies the connection the characters have, is this secrecy surrounding the name of ‘I’/‘Me’. But, as she says, she doesn’t believe in fate or destiny, and instead professes that it is the choices that we all make that is the cause of everything that happens to us.

The ending to this film is surprisingly shocking to say the least, but strangely satisfying. Nevertheless, I was clutching tightly to my tissues since the tears and snot were not stopping even after the credits rolled.

It’s a hard thing to accept inevitability, but that is what keeps you on your toes as you watch the scenes play out and see how every moment affects the characters in some way. This was truly an amazing story and one you’ll definitely want to add to your watch list.

Thank you to Fathom Events for the screening.

A picture is worth a thousand words, so guessing by my photo I would say (in much less than 1000 words) I'm a bit of a playful young and old soul, who enjoys her own company, and when I am social my circle is small. I wanted to start writing because as I enjoy sharing my thoughts and experiences (although few, I'm only 27) with others, getting those out into spoken words is a bit daunting and I tend to talk myself into circles like a drunk person. The written word can begin as a jumbled mess, but after some alteration, and rethinking, it becomes something beautiful and gives more permanence to the listener/reader. If you're like me, you read in your head and assign random voices to what you're reading. I hope to grow my words and thoughts as I write, so this current profile of mine will be updated in due time.
Follow Pop Culture Uncovered on WordPress.com