Where are you from originally, or where do you currently reside? DC native and live in DMV.

How long have you been cosplaying? Dabbled in it since 2011, but seriously cosplayed starting in 2013.

Who or what inspired you to cosplay? I always loved costumes and dressing up for Halloween, even when it was July and I was dressed as a Power Ranger while I watched TV. My mom helped me make my costumes back then, and a lot of what she taught me about sewing and crafting in general ended up coming in handy years later. It wasn’t until 2011 or 2012 when I finally got into cosplay. There were always these stereotypes, the “other” that hung around the term, like cosplayers were mole people or something. It made me never really associate the excitement or passion I had for pulling together something creative for a themed party or Halloween with what it was: cosplay. My first real cosplay was either Nathan Drake from Uncharted 2 or a Captain America comic costume that ended up in the Winter Soldier film. *pushes up imaginary glasses* Guess that makes me a cosplay hipster. I really caught the bug when I went to San Diego Comic Con in 2013. Some friends scored tickets, and I realized I had found my people. It was like living in a Harlem Shake video for four days, but I had an amazing time.

What do you do when you aren’t cosplaying? I tend to work a lot, but when I find free time (and I’m not mid-build), I love to hang out with my friends, I play a lot of video games (currently been diving into AC: Origins and SWTOR), and I love traveling more than anything. I’m always looking for a new location to visit and put another pin in the map. I’ve been lucky thus far to see so many incredible places, and I’ve found some of the best trips were those that got me out of my comfort zone or didn’t quite go as planned. There’s still a long list of places I’d like to see. But mostly I’m working on my next cosplay build. 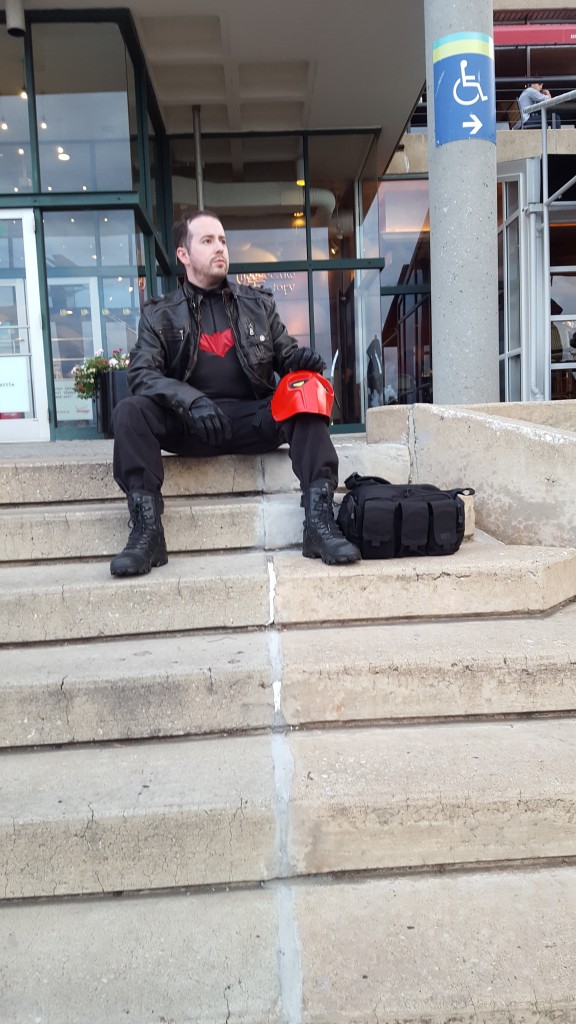 What costumes have provided the biggest challenge and rewards so far and why? The most difficult is without a doubt my Pathfinder Ryder armor from Mass Effect: Andromeda.  It’s my white whale. After almost a year, I’ve slowly been making progress and I’ve had to throw out earlier pieces as they didn’t fit together or ended up being too short. I’ve insisted on building it all myself, and some of my followers are impatient to see the finished product, but don’t worry, it’s coming! For most rewarding though, either my “Outlander” or “Battle of Corellia” versions for my Hero of Tython. For each build, I worked with Crazy Jae Cosplay to design, build, debate, and come up with some crazy ideas that looked odd when broken down into component parts, but amazing as a finished product. I definitely work far better with her help.

What is the best advice you would give someone new to cosplaying? Find what you love, build what you can, try to learn one new skill with each costume, and wear it with pride. Also, networking is the best thing you can do as a cosplayer. You end up making new friends, you know you have one major love in common, and everyone can work together while bringing their own unique skill sets. I can’t tell you how many things I’ve learned just by asking questions or for someone to show me how. We’re an incredibly vibrant community, and we’re at our best when we help others succeed.

What is one thing the cosplaying community can do better when it comes to dealing with each other? Only one? Probably: Patience with the uninitiated. I can’t tell you the number of times I’ve heard people snap at someone for not knowing a character or a fandom. Sure, it can be frustrating when you’re misidentified or people don’t know where you’re from. I mainly dress as an Old Republic Jedi, and I immediately get “Obi Wan” all the time with my beard. Instead, take a breath and explain your character, who you are, why you love the game/movie/comic/anime. In the end, you might just turn someone else on to a brand new obsession.