Bitter Root was always going to have me as an easy mark. It reunites the team of one of my favorite comics: Power Man and Iron Fist, the short-lived revival of the titular characters by David Walker and Sanford Greene. That being said, their new creative endeavor along with Chuck Brown as a co-writer is a very different animal from PM&IF, but no less concerned with the real people who live in the shadow of cruelty. Set in the early twenties during the Harlem Renaissance, it follows the story of the Sangerye family as they protect Harlem from evil.

Walker and Brown waste no time inserting people into the thick of the Roaring Twenties, as well as into the lives of the Sangerye themselves. Focusing mainly on the youngest Sangeryes: Blink and Cullen as they try to emerge in roles they’re ill-suited for, the text provides a great deal of context and emotional depth to characters who readers only get an issue to connect with. And it also does a great deal to avert the notion that women (especially black women given the context of the setting and time) have no frontline role to play in the story, and allows for Blink to take the heroic role that Cullen is forced into. It’s a book that unabashedly encourages and celebrates intersectionality, something more comics really need an injection of.

It’s also worth getting out of the way. As with anything David Walker has written/co-written over the last few years: Nighthawk, Power Man and Iron Fist, Cyborg, Luke Cage, or Occupy Avengers; there is an underlying ideology and point to it and it is unapologetic about that. That’s a good thing, since artistic constructs including comics are representative of what their creators put into them. In the case of Bitter Root it draws a connection between the very real threat of racism and bigotry that threatened the black community in 1924 (and shockingly still exists today) and people turning into hate monsters that require exorcism, which as John Jennings notes in an essay in the issue itself inverts the usual premise of black people being “dangerous” in a more literal fashion given the premise of the threat facing the Sangeryes. 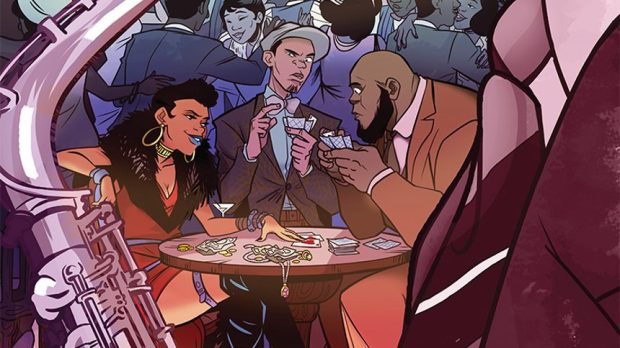 It was also worth waiting a little later in the review to talk about this: but the art is gorgeous. Going in, I was expecting a high baseline of quality given Sanford Greene’s aforementioned work on Power Man and Iron Fist and Rico Renzi’s transcendental work on Spider Gwen, but their work here is astonishing. Greene’s work is an excellent look at Harlem back then, as well as just giving the reader a taste of a very different time. Greene as always can draw a fantastic fight scene with the best of them and there’s plenty of action to go alongside the allegory in this issue. Renzi and Greene’s colors are quite lush, especially with the violet hues scattered throughout the issue, and the sickly greens near the end.

So while I was expecting to enjoy Bitter Root, I did not expect it to hit this hard from the first issue on. The team behind it did an excellent job and I’m frankly looking forward to many more issues. If you enjoy a heavy dose of the supernatural (or more appropriately Ethno-Gothic) intermixed with a relevant take on America via its past, you’d be hard-pressed to find a comic more compelling than Bitter Root.

What's there to say about me? Well I'm an avid fan of comics, video games, tv shows, and movies alike. I love to read, consume, and discuss information of all kinds. My writing is all a part of who I am.