As we all know, Stan “The Man” Lee passed away yesterday. It was a loss that hit me particularly hard, given my historic love for Marvel superheroes and the stories they had.

Now that I’ve had some time to process the loss of Stan Lee to the world at large, however, I feel like I have a few things to say about how his life, his work, and his passing have all affected me on a personal level.

AUTHOR’S NOTE: This piece is going to delve into some stuff from my childhood, and I’ll be waxing nostalgic here for a while. Please bear with me.

My father got me into comic books when I was very young. This was back in the late 70s and early 80s, when politics were very heated (as they are today), and the Cold War still raged on. The notion of how there could be these superheroes in the world, trying to make things right, was amazing to me. I loved the way that each different set of characters had their own struggles, while at the same time having to deal with the over-the-top threats to their world(s) that the villains in these books presented. These were stories into which I immersed myself, imagining what it would be like to have the abilities of these superheroes and using them to help others.

But there was more, you see…

I didn’t grow up with many friends, and I personally knew almost no one who had a disability (let alone a disability like mine) until I was in my teens. Not having anyone around me who was like me was difficult, and I had a very hard time dealing with a lot of the teasing and abuse that I got from my peers as a child. So, a lot of the time, I withdrew into the world of Marvel comics, and read about the adventures of the Spider-Man, The Incredible Hulk, and of course…the X-Men.

The work started by Stan Lee, and continued by Marvel as a whole, continued to resonate with me for quite a while. As a child who was born “different”, I personally gravitated toward the mutant superhero group known as the X-Men. As most of us know, the stories of the X-Men were initially written as an allegory for the racial civil rights movement of the 60s, with Charles Xavier’s methods mirroring those of Dr. Martin Luther King Jr., and the methods of Magneto being a reflection of the more militant approach of Malcom X. Still, as a child with a disability, I looked at those tales from an additional perspective. I saw the struggles of the team of Cyclops, Wolverine, Storm, Beast, and the rest as not only about racial equality, but about fighting for justice for EVERYONE; regardless of what they looked like or what they could physically do. For me, the X-Men were heroes who fought to ensure life, liberty, and the pursuit of happiness for all those who were born with something that made them different from those around them – and I was different from other kids around me. It just made things that much better that the FREAKING LEADER OF THE TEAM WAS IN A WHEELCHAIR! I was so happy to see that kind of representation.

One of the greatest things that Stan Lee ever wrote.

As a child, I had wished that superheroes like that really existed, and I spent a lot of time learning as much as I could about them. I wanted to emulate them in any way I could. At first, I wanted to have those kinds of abilities so that I could fight for what I felt was right. Of course, I was never granted those abilities; and after a while, I felt lost. I felt like I was never going to be able to effect the kind of change in people’s perspectives that I wanted to. However, following some very dark times in my teenage years, I finally learned that I would have to start by doing what was within my power to help those around me. It wasn’t about having some great superhuman power, but in using what mental, emotional, and physical abilities I already had in order to make things better for those who needed it.

I started talking to more people, getting to know their personal stories, and trying to see what life was like through their eyes. I became fascinated with other cultures and other perspectives. I learned to look beneath the façade of what someone was on the outside, and see who they were on the inside. I also started cosplaying for children’s charity events, and have gotten a great deal of joy out of it. All of this also allowed me to make the friends that I have made in my life – some of whom are still with me decades later – and become the person I am today. A big part of the credit for that goes to Stan Lee and his X-Men. 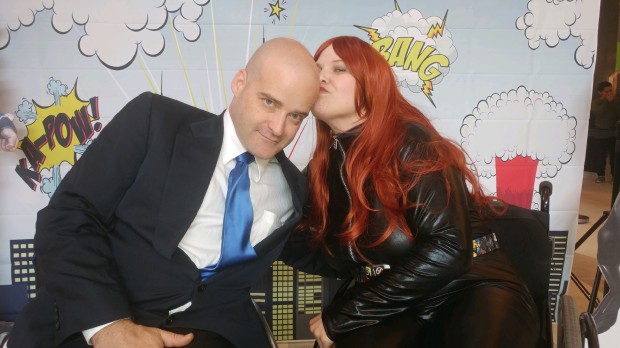 The author & friend cosplaying as Professor Xavier and Jean Grey (respectively) for a children’s event.

So, if ever someone tries to tell you that reading comic books or thinking about superheroes will get you nowhere in life, you just tell them what Stan “The Man” Lee said:

“Another definition of a hero is someone who is concerned about other people’s well-being, and will go out of his or her way to help them — even if there is no chance of a reward. That person who helps others simply because it should or must be done, and because it is the right thing to do, is indeed without a doubt, a real superhero.”
– Stan Lee

So long, Stan. Until we meet in the next universe.