In the wake of cancellations and uncertain future for any of its flagship series outside of Stranger Things, Netflix has announced that another bizarre original series is getting it’s very own winter special. That’s right, Neo-Yokio, the hyper-meta, Jaden Smith anime is returning to streaming services this December to serve up a Christmas OVA just in time to get you feeling some (holiday) way.

Premiering in September of last year, Yokio followed the story of Smith’s Kaz Kaan, a pink haired, demon-fighting socialite prone to melancholy over both the supernatural and his variable status among the city’s hierarchy. During its short, six episode run, the Ezra Koenig (yes, that Ezra Koenig) creation did its best to confuse otakus and critics alike, inspiring memes and jabbing at familiar genre tropes, but taking itself just seriously enough to leave some wondering if it wasn’t as steeped in parody as the very nature of its premise would have audiences believe. The series also managed to boast a rather impressive cast of voice actors, employing everyone from academy award winner Susan Sarandon, voice-acting veteran John DiMaggio, and comedians Desus and The Kid Mero to deliver scripts either received as farcical, or brilliantly self-aware. 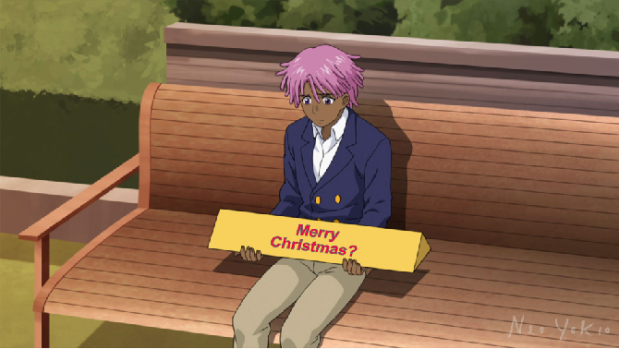 In the teaser trailer for Pink Christmas, we see neither Kaz nor any of the colorful cast of characters that supported or antagonized him in turn, but a lingering shot of the snow-covered city’s most eligible bachelor list, all decked out in holiday fare of course, promises that everyone’s faves will be back for more magical battles and existentially fraught fashion faux pas. No word yet on if this is a last gasp for the show or a prelude to a long overdue (?) second season, but given the polarized attention its initial run garnered, there’s a decent sized chance that Netflix is doing a little more than testing the waters with this latest outing. In any case, while I’m not sure whether or not we deserve this particular Toblerone, much like the holiday season this is all vibing off of, it’ll be here before we know it.

.@toblerone what about a christmas special? pic.twitter.com/mkFKixlmUc