I’m not always a fan of “party games,” those tabletop games intended for large gatherings like Codenames, Taboo, or Cards Against Humanity. It’s not that they’re not fun, but the fact they rely on a large number of people makes them harder to find the people to play.

Also, most of these games are there for socialization purposes with little complex design. I obviously enjoy a social atmosphere (I wouldn’t play tabletop games if I didn’t), but I like smaller groups and more strategic experiences.

Despite this, I decided to try Travis Hancock’s Deadwood 1876, as it looked intriguing. I can safely say I’ve found that excellent medium between “party game” and “strategic competition” in Façade Games’ latest product.

Deadwood 1876 puts players in the Wild West during the gold rush, portraying historical figures in the lawless town of Deadwood in the Dakota Territory. From Wild Bill Hickok to Calamity Jane, each person is in town trying to amass their own fortune.

Of course, they don’t earn money through mining – instead, these figures rob others or join forces in great heists. Along the way, they’ll make alliances, betray each other, and have duels over the best territory.

At the end of it all, only the wealthiest posse will make it, but the game doesn’t end there. Gold quickly turns allies to enemies, and there’s always a final showdown and the last person standing walks out with everything. 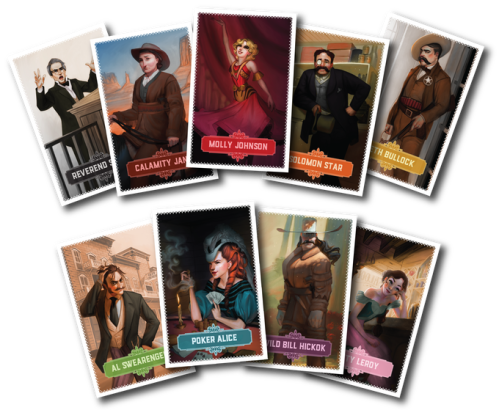 Gameplay in Deadwood is simple – each person takes a turn to play a card from their hand. That card has an Item or a Gun on it; the player chooses which one they’re using.

Items allow you to do whatever the text says and have no counters. Maybe you spy on people’s safes, draw new cards, or move to a new location.

Guns are how players initiate Robberies and Duels, which the target counters with a Gun from their own hand. Robberies allow you to steal a safe from someone else while a Duel enables you to switch locations with someone (or push them out of yours).

When a gunfight happens, each player rolls a colored die equivalent to the gun they threw down. Each die is different depending on the weapon; a tiny Derringer won’t roll as high as a deadly Winchester rifle.

Once cards are played, and dice are rolled, the winner is the highest number – if it’s the Robber or the person who started the Duel, they get what they want. Otherwise, nothing happens, and play continues to the next person.

There’s more to Deadwood than robbing each other; once everyone has taken a turn, it’s time for the end of round Heist. Players now play a Gun card from their hand as they attempt to steal a safe from the town’s limited stack; as before, whoever rolls highest wins the safe.

The game continues with each player taking a turn and then concluding a round with another Heist. Once the last Heist occurs, everyone takes one more round and then it’s time to start counting all those earnings.

Inside each safe are a variety of possible objects, beyond the obvious Gold (which counts toward seeing who goes to the Final Showdown). Badges allow you to take extra turns while Showdown Guns provide you with extra dice when the last shootout begins; some safes might even have nothing but Rats.

After everyone has finished all their rounds (regular or extra), each Establishment then counts how much Gold is on site, based on the players at the site and their safes. The highest amount is the posse that goes to the Final Showdown; everyone else slinks off into the night, forgotten by history.

The showdown is a winner takes all like any gunfight, except players roll not only for the Gun played from their hand but also for any Showdown Guns in their safes. Whoever rolls lowest is wounded, and play continues; if anyone is already injured when they have the low roll, they’re out of the game.

This shootout continues until only one person is left standing – they are now the undisputed winner, gather all the gold, and ride off into history! 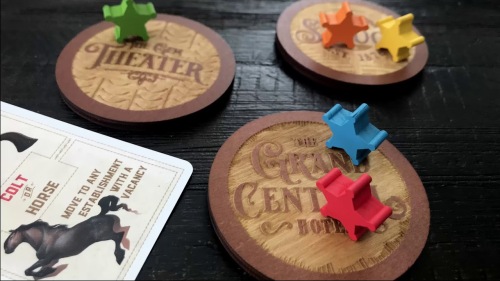 As simple as all of that sounds, Deadwood hides a lot of strategies and social drama.

For one, everybody is limited to three safes (extras must be given to the “poorest” character), which means you must have a game plan. Do you keep Gold to make it to the Final Showdown, Guns to win the showdown, or Badges to take extra turns?

Besides, everyone keeps their safes facedown, and they must be kept in the same order (except when told to shuffle them). Players may find out what you have through Item cards or deduction, and memory plays a big roll in knowing what to go after; conversely, players might try to get rid of “useless” safes by luring people in for a Robbery.

Another strategic aspect is making it to the final round, which requires you to be in the Establishment with the most Gold. Establishments are limited in how many people can be there, so you might have to Duel your way next to the person you think has all the money; similarly, be suspicious if people are shifting position, or else you might be left out of the Final Showdown.

These strategies are on top of the social aspect, where players may make promises, alliances, betrayals, etc. The more people playing, the higher the stakes and the more ruthless the game, as everyone tries to stock up, position themselves, and be the last one alive.

Deadwood has great variety and allows you to play anywhere from two to nine players, but the game is mostly intended for three to seven players (with slight rules differences for low or high extremes). We found around four to six players was the sweet spot, as it allowed for a lot of back-and-forths and jockeying for position.

Like Hancock’s other games, Deadwood is semi-historical – it presents a real location with historical figures, and even provides some history in its rulebook. Of course, like Salem 1692 and Tortuga 1667, the accuracy of the game itself is quite questionable; several of Deadwood’s characters were upstanding members of the community (not criminals), and few would have been robbing safes or participating in shootouts.

That doesn’t detract from the fun gameplay, the Wild West theme, or interest sparked in the real Deadwood. Even the packaging is made to look like a leather-bound book, adding to its historical feel.

Whether you want to play with several friends or bring in a whole table’s worth of people at a party, Deadwood works well both socially and strategically. It’s also simple enough for the younger crowd, although the violence (and backstabbing) might limit it to teenagers and older.

Regardless of how you play it, remember to protect that safe, keep your friends close, and keep your enemies closer!